In April the Justice and Peace (J&P) Commission of the archdiocese of Cape Town was fortunate to have an information-sharing session with a visiting German Church delegation, led by Bishop Stephan Josef Ackermann of Trier. Bishop Ackermann is the chairman of J&P in Germany, and also the bishop assigned to deal with sexual abuse cases in Germany. 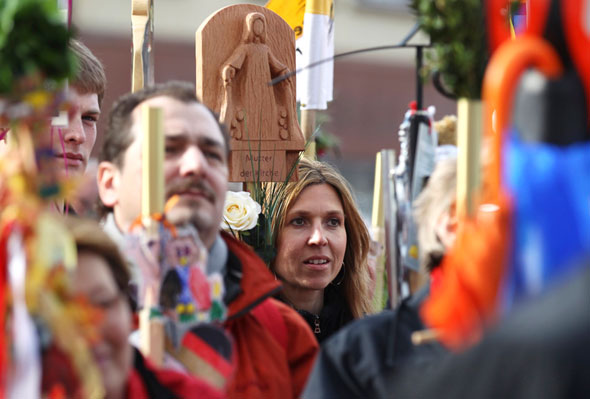 Pilgrims pray at last year’s “Katholikentag”, the biennial German Catholic Church assembly which is organised by the national laity council.

The German delegation was impressed that in South Africa we have J&P commissions in our parish commissions.  In Germany J&P exist only on a national level, under the Zentralkomitee der deutschen Katholiken (ZdK), the official council of the German Catholic laity.

The ZdK was founded in 1848, was banished under Bismarck and again under the Nazi regime, but gained public respect mostly during the Cold War. Its secretary, Dr Stefan Vesper, was among the visiting delegation.

The ZdK is a representative body of lay people. It unites diocesan councils, Catholic associations, institutions of lay apostolates, lay movements and communities.

It serves also as a forum of opinions on political issues and the Church. From what I understood, the ZdK represents the concerns of Catholics in the public arena. It has a division that operates like our Catholic Parliamentary Liaison Office in participating in public dialogue and in the houses of legislation in shaping public policy. It advises the German Catholic Bishops’ Conference on issues of social, political and religious life.

Most of us showed deep interest in ZdK works, especially in the light of the media reports about some of our church leaders on topics such as sexual abuse and homosexuality. The ZdK seems to be a good forum for dialogue and a fountain of sharing ideas between bishops’ conference and general laity, so that the Church can truly speak with one voice.

It was refreshing to notice that the bishops and ZdK actually speak with one voice, albeit from different perspectives, about the social teachings of the Church, and that no noticeable tension exists between hierarchy and the lay body.

For instance, I had a short discussion with Aloys Buch, a leading professor of moral theology and a deacon, about the gay marriage discussions that are currently a hot topic throughout Europe.

Apparently the German Catholic Church makes a distinction between civil unions and marriage. Prof Buch argued that the widespread demand for gay marriage, as opposed to civil unions, is not about natural justice, but about the desire for a “biopolitical tyranny to destroy marriage and the family as the most basic and crucial mediating social institution”.  I later discovered that Bishop Ackermann holds similar views.

So there is a clear distinction made between gay marriage, which the German Church—like the Church everywhere—opposes, and same-sex civil unions, which would give homosexual couples all the rights of matrimony, except to call that union a marriage.

While the legislation of gay marriage is not acceptable to the Church, for the reasons Prof Buch outlined, the legal construct of civil unions of same-sex couples appears to be tolerable.

I was embarrassed to admit there is a certain squeamishness about talking about these things as openly in the Southern African Catholic Church.