Biography of Hymns: ‘How Great Thou Art’

Sweden’s gifts to the world of music include pop giants ABBA, the great soprano Birgit Nilson, the classical composer Carl Michael Bellman and one of the world’s most beloved hymn. How Great Thou Art has topped many polls of favourite hymns, most notably one conducted by the BBC’s Songs of Praise programme.

But the hymn doesn’t come from Britain or the United States, but from Sweden. The melody, which lends itself to such glorious choral belting out at Mass, was originally an old Swedish folk tune. But that wasn’t the hymn’s starting point.

That story begins in 1885 with Carl Gustav Boberg, then a 26-year-old a lay minister in the Mission Covenant Church, a reformed church which was Sweden’s second-biggest denomination, after the Lutheran Church.

One day Boberg was walking home from church near Kronobock, enjoying the peace of the ringing church bells. Suddenly a fierce thunderstorm hit. And as suddenly as it had appeared, it again subsided, returning Kronobock to its serene tranquillity under a rainbow.

When I came home [to Munster’s, on Sweden’s east coast] I opened my window towards the sea, Boberg later recalled. There evidently had been a funeral and the bells were playing the tune of  When eternity’s clock calling my saved soul to its Sabbath rest. Reflecting on that as well as on the storm, the majestic beauty of the village’s shimmering bay and the birdsong from the green woods, he decided to write a poem about God’s goodness.

Carl Boberg, who wrote the original words of How Great Thou Art

He titled the nine-verse poem O Store Gud (O Great God), and published it in March 1886, with no plans to set it to music.

In 1888, Boberg was surprised to hear his poem being sung in a church to the tune of an old Swedish folk song. When he became the editor of a Christian newspaper two years later, he published the text with its musical arrangement. Soon the newly-minted hymn spread throughout Sweden and other lands in the Baltic where there were Swedish communities.

One such community existed in Estonia. There an ethnic German member of the Baptist Church, Manfred von Glehn, heard it, and in 1907 translated the hymn into German. It soon found great popularity.

In 1912 a Russian translation of von Glehn’s text was published in a hymn book as Velikiy Bog (Great God). And there the hymn’s proliferation rested for a while.

Seven years later, in 1925, the American E Gustav Johnson rendered the Swedish version of the hymn as O Mighty God. It found inclusion in several hymnbooks, but didn’t catch on.

But it is the version by the British Methodist Stuart Hine (1899-1989) which we sing today.

Hine first heard the hymn as a missionary in the Ukraine in 1931. He first tinkered with the Russian lyrics and added verses. After leaving Eastern Europe, on account of World War II, he eventually decided to create an English version. In doing so he worked not from the Boberg’s original but from the Russian translation of the German translation. And somehow he arrived back at the German title.

He kept adapting and adding to the text until 1949 when How Great Thou Art was finally published.

Despite the archaic English of its title which might, in fact, be part of its appeal the hymn quickly proved popular with British missionaries who spread it into their areas of evangelisation.

Billy Graham and his musical director, George Beverley Shea, picked it up on a visit to London. They played it a few times, but the hymn became a huge hit when it was sung at a Graham Crusade in New York’s Madison Square Garden in 1957. Thereafter it was a musical highpoint of all Crusade events. 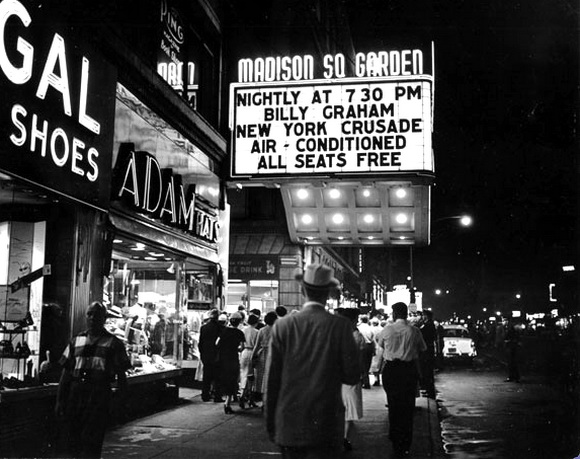 Signage for the Reverend Billy Graham’s Crusade at New York’s Madison Square Garden in 1957, at which “How Great Thou Art” became a breakthrough hit.

The Recording Industry Association of America ranks Shea’s recording at number 204 in its list of top recordings of the 20th century. Shea died in 2013, having lived to the age of 104.

How Great Thou Art has since been translated into many different languages, from Vietnamese to Esperanto. It has also been recorded by many pop singers, including Elvis Presley, Gladys Knight, The Statler Brothers, Connie Smith, Al Green, Carrie Underwood and Susan Boyle.

As for Carl Boberg, he moved from being a newspaper editor to becoming a member of Sweden’s parliament for 20 years. He published more than 60 poems, hymns and gospel songs before his death at the age of 80 on January 7, 1940.

See also the biography of “It Is Well With My Soul”