Vatican astronomer: Just a matter of time until life found in universe

Jesuit Brother Guy Consolmagno, the new president of the Vatican Observatory Foundation, has no doubt that life exists elsewhere in the universe and that when humanity discovers it, the news will come as no big surprise. 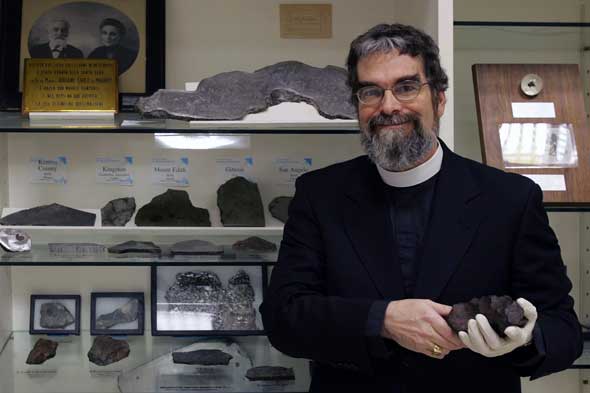 He suggested that the likely discovery — whether next month or a millennium from now — will be received much the way that news of planets orbiting far off stars has filtered in since the 1990s.

“The general public is going to be, ‘Oh, I knew that. I knew it was going to be there,'” Brother Consolmagno told Catholic News Service prior to a presentation at a NASA/Library of Congress symposium on preparing for the discovery of life in the universe Sept. 18-19.

A planetary scientist who has studied meteorites and asteroids as an astronomer with the Vatican Observatory since 1993, Brother Consolmagno said he hopes the questions about life on other planets will focus more on how humanity sees itself.

“When we say human, human as compared to what?” he asked.

While the discovery of life elsewhere will not prove nor disprove the existence of God, Brother Consolmagno expects that it will open the door to ponder what form salvation history may take in other intelligent societies.

The longtime Vatican astronomer addresses the same question and a series of others that cross the threshold between science and religion in a new book, “Would You Baptize an Extraterrestrial? … and Other Strange Questions From the Inbox at the Vatican Observatory,” set to be published in October. Co-written by Jesuit Father Paul Mueller, another Vatican Observatory astronomer, the book uses a series of easy-to-read conversations between the two in an effort to explain how the church supports science and provide insight into how religion works.

Not all is as black and white as people imagine, and there’s no conflict between science and religion, Brother Consolmagno said.

The book addresses questions about the Big Bang theory on the origins of the universe and the creation story in the Book of Genesis; the circumstances surrounding the star of Bethlehem; the end of the world; and the church’s inquisition of Galileo Galilei as he wrote about a sun-centered solar system.

“They’re profound questions and they’re real questions, but the questions aren’t always what you think the words are saying,” Brother Consolmagno said. “You have to dig underneath and say, ‘When people are worried about what was the star of Bethlehem, they really want to know how much does God act in the universe? Did God make that star? Does God arrange things? Does God use divine coincidences?'”

Brother Consolmagno, who had an asteroid named for him in 2000 — 4597 Consolmagno — has long been a promoter of better understanding across what is often portrayed as the science-religion divide. He said there is no conflict between his faith life and his scientific life.

“I don’t think people understand nearly well enough about being a scientist and about being a religious person, a member of a religious order or just a devout Catholic,” he said. “It’s fun. It’s supposed to be fun. If it’s not fun, you’re doing it wrong. God makes himself known through joy.

In his presentation Sept. 19 bearing the same title as his new book, Brother Consolmagno suggested the idea of discovering extraterrestrial life may be so appealing to humanity, with all its pain, injustice and disease, that there is hope that “any race advanced enough to cross the stars to visit us must also be advanced enough to show us how to overcome all those human ills. They look to the aliens to be saviors of mankind.”

Other symposium participants from around the world involved in searching for life on other planets addressed topics such as how society should cope with the discovery, astrobiology and theology, the moral status of non-human organisms and moving beyond preconceptions of what life is.

An avid reader of science fiction, Brother Consolmagno will receive the Carl Sagan Medal from the Division of Planetary Sciences of the American Astronomical Society in November. The award is being given for his work in communicating planetary science to the general public.

He also is planning the Vatican Observatory Foundation’s first Faith and Astronomy Workshop for clergy, religious and laypeople working in parish education. Set for Jan. 19-23 in Tucson, Arizona, the workshop will give 25 participants the chance to participate in hand-on astronomical projects, join lectures and view deep sky objects at night. The application deadline is Sept. 30. Apply at www.vofoundation.org.

Editor’s Note: A video of Brother Consolmagno discussing the possibility of discovering extraterrestrial life is online at youtu.be/7ARjTJZVw_o.

The Magician Who Wanted to Be a Priest

Journey from Gangs to God