NEW YORK (CNS) – Few immigrants to America can be said to have had it easy. Part and parcel of the immigrant experience, no matter the destination, is relegation to the bottom rungs of the socioeconomic ladder. 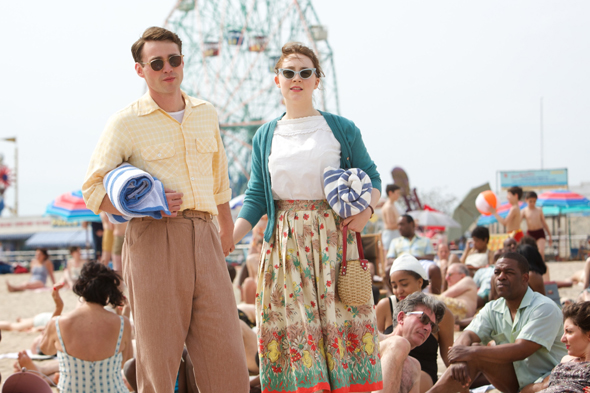 Emory Cohen and Saoirse Ronan star in a scene from “Brooklyn.”(CNS photo).

Ideally, this situation is temporary, as is the sense of dislocation, apprehension and bewilderment so many emigres face.

In the film “Brooklyn” (Fox Searchlight), set during the early 1950s, Eilis Lacey has relatively little to complain about. Her journey out of Ireland and reception in America go about as smoothly as can be imagined. In part because of the time period – decades after the main waves of European immigration and catalysts such as the Great Famine – her material circumstances on either side of the Atlantic are far from dire.

Yet there’s a more specific reason why her coming to America is frictionless and free of tumult. A Catholic priest, Irish but long stationed in a Brooklyn parish, has paved the way by securing Eilis a job in a local department store and accommodations in a reputable boarding-house.

The comparative ease of Eilis’ transition doesn’t mean her story, adapted from a novel by Colm Toibin, lacks incident or fails to compel. Just don’t expect the kind of harshness and bleakness found in parallel works such as “‘Tis.” “Brooklyn” is picturesque, meticulously understated and, like star Saoirse Ronan’s graceful performance, dignified. The movie eschews histrionics and doesn’t excoriate anyone or anything. No individual, group or institution is demonized or degraded.

Knowing there are few opportunities for clever young women in their hometown of Enniscorthy, County Wexford, Rose Lacey (Fiona Glascott) has arranged for her sister to emigrate. Despite pangs about leaving Rose behind with their widowed mother, Eilis is eager to go.

Poised and competent, if inexperienced, Eilis joins the ranks of Irish girls seeking new lives in Brooklyn. As she begins working behind the counter at Bartocci’s department store, a protracted bout of homesickness dampens her spirits. Then her sponsor Father Flood (Jim Broadbent) enrolls her in night classes at Brooklyn College and she starts to blossom.

Eilis helps serve Christmas lunch to down-on-their-luck Irishmen in the parish hall. (“These are the men that built the bridges, roads and tunnels,” Father Flood observes.) At a church dance she meets Tony Fiorello (Emory Cohen), a charming young plumber of Italian descent. Their romance seems to ratify her decision to emigrate.

But it’s not quite that simple. Under sad circumstances, she goes home for the first time and, much to her surprise, finds that life in Enniscorthy isn’t so bad. She gains another suitor, Jim Farrell (Domhnall Gleeson), and seriously considers not returning to Brooklyn.

Taking his cue from Toibin’s subtle prose, screenwriter Nick Hornby neatly calibrates the pathos and humour. Much of the latter comes via Mrs. Kehoe, the boardinghouse owner hilariously portrayed by Julie Walters.

Some viewers may feel the movie is too placid and wish for more overt conflict. The fastidious production design does result in images of New York and the Emerald Isle that verge on the idealised. And John Crowley’s directorial decisions make it clear he’s not aiming for gritty realism.

On reflection, however, “Brooklyn” is neither whitewashed nor appreciably flawed by naiveté. It has more depth and incisiveness than first meets the eye. No doubt assimilation wasn’t as effortless as it appears, even in the early 1950s. But the refusal to manufacture struggle or disruptive plot points matches the film’s laudatory absence of melodrama.

What “Brooklyn” offers is a moving and trenchant look at the subject of migration – including the much-overlooked post-World War II phase of the Irish diaspora – from a woman’s perspective.

Eilis has one serious moral lapse. Yet what gives the film more than surface beauty, and qualifies it as elevated entertainment, is that her subsequent decisions are ethically clear-cut while also coinciding with what the audience is rooting for. Atonement is integral to the movie’s worldview and redemption is possible because mistakes are measured in full context, not in isolation.

“Brooklyn” sees the Catholic Church as playing a vital role in this process and as a constructive force in the daily lives of individuals such as Eilis. What emerges is a portrait of a caring, practical priest and a church that, without fanfare or hubris, provides spiritual guidance and material comfort to its flock.

The film contains a non-explicit premarital encounter, several uses of rough language, and some crude and crass language. The Catholic News Service classification is A-II – adults and adolescents. The Motion Picture Association of America rating is PG-13 – parents strongly cautioned. Some material may be inappropriate for children under 13.

NEW YORK (CNS) – There’s a reason most action films center on hard-boiled characters who know how to look out for themselves. Ordinary folk – be they accountants, dentists or that emo barista at the local high-end coffee spot who always spells your name wrong – are unlikely to flourish in the usual circumstances confronting a James Bond or a Jason Bourne. 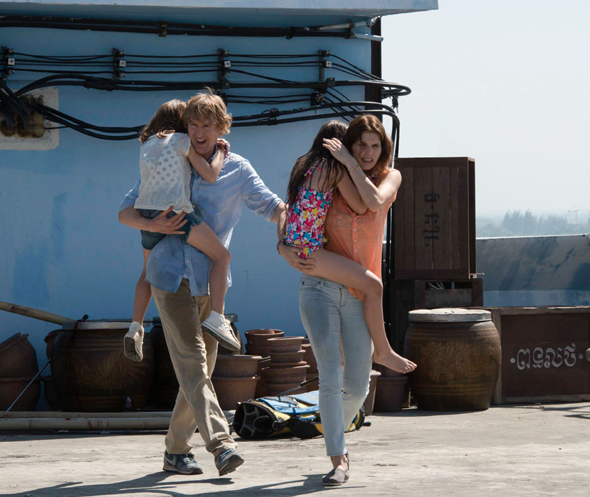 Owen Wilson and Lake Bell star in a scene from the movie “No Escape.” (CNS photo).

So, while the people behind the gruelling adventure “No Escape” (Weinstein), led by director and co-writer John Erick Dowdle, can be honoured for trying to stretch genre boundaries by plunking an everyday family down in the midst of violent turmoil, their effort is doomed from the start.

The outcome of their experiment may be strengthened emotional bonds on screen. Yet down in the audience, their tinkering is likely to garner a harvest of winces based on moviegoers’ discomfort at seeing the innocent and the vulnerable suffer.

The endangered clan in question consists of expatriate businessman Jack Dwyer (Owen Wilson), his wife Annie (Lake Bell) and their two young daughters, Lucy (Sterling Jerins) and Beeze (Claire Geare). No sooner have the Dwyers arrived in the Thailand-like country where Jack is about to start a new job than a coup breaks out.

Normally, of course, that would be a matter for the locals to sort through, while protected tourists and foreign residents watched from afar. Unfortunately for the Dwyers, this particular uprising is fueled by murderous anti-American rage, and the hotel where they’re temporarily staying soon becomes a killing ground.

Forced to flee into the teeming, unfamiliar urban landscape beyond the besieged hostelry, the foursome benefits from the help of a British-born chance acquaintance named Hammond (Pierce Brosnan).

A veteran traveller whom the Dwyers first connected during their long flight from the States, Hammond, unlike his newfound friends, knows the lay of the land quite well. Better yet, for reasons that only become fully apparent later, he also boasts a set of well-honed combat abilities.

Dowdle’s script – penned in collaboration with his brother Drew – covers some predictable moral territory. Jack rises to the challenging occasion by resourcefully protecting his spouse and children. Yet he’s troubled by some of the brutal measures to which he’s forced to resort.

Partly, no doubt, to keep the proceedings from becoming too saturated in machismo, Annie turns out to be a doughty warrior herself. And the extreme danger the couple faces only serves to reinforce their slightly frayed marital ties. Thus, during a pause in their fraught odyssey, Annie acknowledges that the rewards of her current family life far outweigh the loss of the more self-centered dreams she cherished in youth.

Yet the unsettling experience of following the Dwyers’ escape effort remains. It’s one thing to watch Tom Cruise’s Ethan Hunt make his way across the perilous no-man’s-land fringing the Berlin Wall in “Mission: Impossible – Rogue Nation.”

However, quite different feelings are aroused by the plight of the trapped Dwyers as, with fanatical gunmen slaughtering their fellow guest, they steel themselves to jump from the roof of their hotel to the top of a neighbouring building – or, in the case of the girls, to be thrown across the yawning gap that separates the two structures. The situation is certainly dramatic and potentially tragic. But is it the stuff of adventure?

The political subtext is equally troublesome. Virtually all of the Asians in “No Escape” come across as inhuman marauding savages. Yet this blatant smear represents an indispensable element of the Dowdles’ flawed premise, which requires the depraved natives to prey relentlessly on their European and American victims.

To paper all this over, the dialogue includes an unconvincing political lecture portraying the whole situation as an unfortunate – but understandable – reaction to the injustices wrought by globalisation.

The film contains frequent harsh and sometimes gory violence, emotionally wrenching situations, including a rape scene with partial nudity, a couple of uses of profanity and about a dozen instances each of rough and crude language. The Catholic News Service classification is L – limited adult audience, films whose problematic content many adults would find troubling. The Motion Picture Association of America rating is R – restricted. Under 17 requires accompanying parent or adult guardian.