Why Are We So Indifferent? 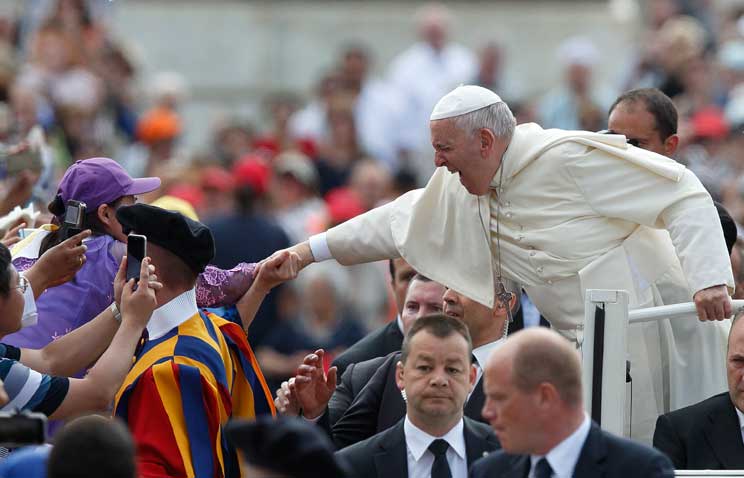 Pope Francis reacts as someone in the crowd holds onto his hand during his general audience in St. Peter’s Square at the Vatican. (CNS photo/Paul Haring)

“This indifference and hostility can turn into aggression” toward people often marginalised by society, the pope said during his weekly general audience.

The pope reflected on the Gospel reading of a blind beggar in Jericho whose sight was restored after pleading with Jesus to heal him. “The people walking in front rebuked him, telling him to be silent, but he kept calling out all the more, ‘Son of David, have pity on me!'” the Gospel reading says.

Those who told the beggar to be quiet, the pope recalled, reproached him “as if he did not have a right to cry out.” However, despite his blindness, the poor man “sees with the eyes of faith” and his plea was powerful enough to attract Jesus’ attention.

“Let us also think this, when we found ourselves in awful situations, even sinful situations, how it was Jesus who took our hand and took us out from the margins to the path of salvation,” the pope said.

The Gospel reading, he added, teaches Christians that the good news implies placing those excluded at the centre and that Jesus’ merciful presence is an opportunity for “those in need of help and consolation” to cry out to him.

Christians are called to follow the path of the blind man who “glorified God” and followed Jesus after being healed, the pope said.

“We are all beggars; we are always in need of salvation. And all of us, every day, need to make this step: from beggars to disciples,” he said. “Let us allow ourselves to be called by Jesus, healed by Jesus, forgiven by Jesus and follow him, praising God.” By Junno Arocho Esteves, Catholic News Service