Pope Francis: ‘I Want to ask You Something’

Jesus suffers with all, pope says after confirming sick teen – In a brief outdoor ceremony, Pope Francis administered the sacrament of confirmation to 16-year-old Giuseppe Chiolo, who had come to the Vatican by ambulance from Florence. 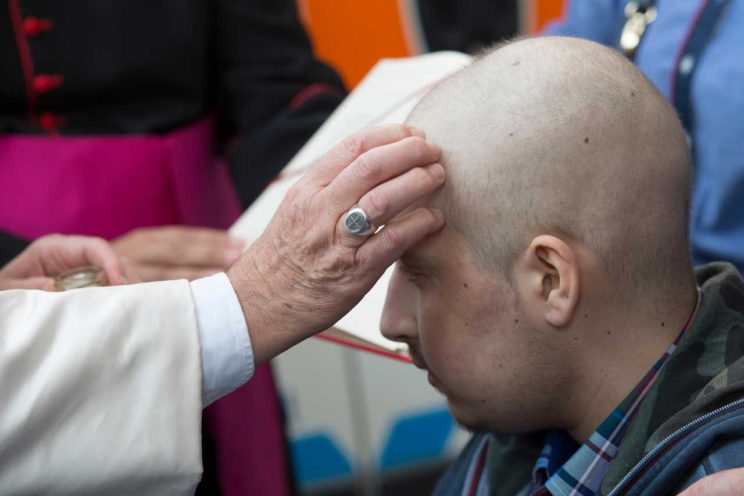 Pope Francis administers the sacrament of confirmation to Giuseppe Chiolo, 16, in St. Peter’s Square during a Year of Mercy general audience at the Vatican Sept. 10. The young man is being treated in the oncology ward of a Florence hospital. (CNS photo/L’Osservatore Romano)

Chiolo, who is being treated in the oncology ward of a Florence hospital, had written to Pope Francis with a request to meet him.

The teenager was given his wish, and the sacrament, Sept. 10 before the pope joined about 30,000 people for a special Year of Mercy general audience in St. Peter’s Square.

The young man’s parents, Carmelo and Maria Giuseppina, and his sister, Dafne, also were present, as was the chaplain of Meyer Children’s Hospital, where Chiolo is receiving treatment.

In his audience talk, Pope Francis said that in God’s mercy he sent Jesus into the world “so that we could receive a new life marked by pardon, love and joy.”

“Certainly, it is true that life puts us to the test and sometimes we suffer because of it,” the pope said. “Nevertheless, at those moments we are called to fix our gaze on the crucified Jesus who suffers for us and with us as proof that God will never abandon us.”

“The love of God is boundless,” he said. “Our whole life, although marked by the fragility of sin, is placed under the gaze of God who loves us.”

Pope Francis continued talking about the reality of sin and the greatness of God’s love when he led the midday recitation of the Angelus prayer with visitors in St. Peter’s Square.

“Jesus shows us the true face of God: a father with open arms who treats sinners with tenderness and compassion,” he said.

The most striking thing about the parable of the prodigal son, he said, “is not so much the sad story of a young man who falls into degradation, but his decisive words: ‘I shall get up and go to my father.’ The path of his return home is the path of hope and new life.”

Like the father in the parable, the pope said, God awaits the return of his children, not so he can take the opportunity to scold or humiliate them, but so he can shower his love on them.

The parable – like the day’s Gospel stories about the shepherd who finds his lost sheep and the woman who finds her lost coin – ends with celebrations because that which was lost has been found, he said.

“I want to ask you something,” the pope told the crowd. “Have you ever thought that each time we approach the confessional, there is joy and celebration in heaven?”

The parables, he said, should fill people with hope and courage because, with the grace of God, there is no sin from which a person cannot rise again.

“No one is past redemption,” the pope said. “No one!” By Cindy Wooden Catholic News Service

If You Can’t Go To Confession, Take Your Sorrow Directly To God