Does the ANC really know our struggle?

The ruling African National Congress is dominated by the culture of exiles who do not seem to know the suffering and sacrifices made by people who fought apartheid within South Africa, argues Bishop Victor Phalana. 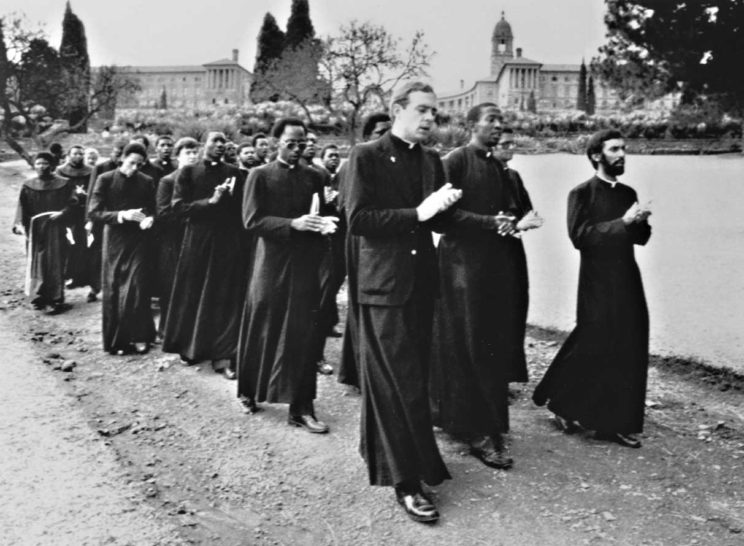 Seminarians from St John Vianney march on the Union Buildings in Pretoria in September 1985 to deliver a memorandum to President PW Botha. It was only the second-ever successful march on the government’s headquarters. Among the marchers were future bishops Victor Phalana and Sithembele Sipuka. Among others are Frs Michael van Heerden, Siyabonga Mfayela, Peter-John Pearson, Mkheseni Xulu, John Atkinson, Brian Gelant, Augustine Khanyile OFM and Lucas Bambezela OFM, as well as Andrew Johnson.

South Africans know when to say enough is enough. This is the cry of the poor — those on the peripheries; those who are marginalised and do not count. They are remembered only during elections, but now, after the local elections in August, they know: their vote counts.

This year, the voters expressed themselves: No more blind loyalty. They told the political leaders: “You must earn and deserve our votes. If you don’t, we wiĺl vote for someone else, or not vote at all.” It happened in Nkandla, in Mandela Bay, in Tshwane, in Johannesburg. Now they know it is possible. The people have exercised their right to vote.

All this has made me think of what it is that we struggled for.

In the mid-1980s a group of 41 Catholic seminarians, including myself, marched to the Union Buildings, the seat of the apartheid government administration, to deliver a letter to President PW Botha.

In that letter we called for the suspension of the State of Emergency and for democratic rule in the land. We made a prophetic announcement. Quoting the prophets, we said that unless the apartheid regime repented, it was going to collapse—and within four years, it did.

It was a risk for us to march to the Union Buildings — only one previous march had successfully led there; the women’s march of August 9, 1956 — but we were ready to lay down our lives for justice and freedom.

Sometimes I am tempted to think that some of the leaders who returned from exile do not know what we, who remained in South Africa, went through.

We respect the veterans of the struggle and all the exiles. Some of them came back, others are still missing. Some were not here during the 1976 Soweto uprisings. They were not part of school boycotts, bus boycotts, union strikes in mines, industry, farms, government and so on.

Do they know our pain of the time when the United Democratic Front was established in August 1983? Do they know how we felt during the Vaal Seven or Delmas trials; the execution of Solomon Mahlangu; the banishment of Winnie Mandela; the abduction and murder of the Pepco Three; the Khayelitsha burnings; the massacres in Uitenhage, Mamelodi or Alexandra (where we went as seminarians with our rector Fr William Slattery for a vigil and funerals); the deaths of people in Winterveldt, Garankuwa, Soshanguve and Oukasie; the petrol bombings of homes by police; young people who tried to join Apla and Umkhonto we Sizwe being caught and executed; people who were trapped and sent to jail; suspected informers who were necklaced?

Do they know how we felt when Khotso House, headquarters of the South African Council of Churches, was burnt down? Or when our own Catholic Bishops’ Conference general secretariat, Khanya House, was bombed?

Other Church properties which were used for protest meetings and union workshops were also bombed by the security forces.

My own predecessor as bishop of Klerksdorp, Bishop Zithulele Mvemve, was detained without trial by the security police when he was a priest in Johannesburg.

Do the exiles have a clue of what “Black Christmas” was like — people forced to drink fish oil or Staysoft? Did they experience the teargas we inhaled? As seminarians we attended memorial services at Regina Mundi church in Soweto — and we were always teargassed and shot at.

Did they know the brutality of the homeland system and the savagery of the vigilantes?

Do they appreciate the struggles of our radical unions of that time? And I don’t mean our present ones which are protecting corruption, eTolls and state capture, but those that spoke on behalf of workers’ rights, justice and freedom for all? I witnessed their struggle because in the early 1980s their preferred place for workshops was our St Peter’s Seminary in Hammanskraal, Pretoria.

I am saying all this because some of our friends in the ruling party do not appreciate this history. I know that people like Oliver Tambo and Chris Hani appreciated the local contribution to the struggle. But now we are faced with Amasela: those who use their struggle credentials in exile to downplay the contribution of those who struggled within the borders. Now they are busy enriching themselves and their friends!

We all played a part. We want to go back to the values of Tambo, Biko, Hani, Mandela, Mama Sisulu, Ruth First, Mosebudi Mangena and Robert Mangaliso Sobukwe.

Those who fought from within must be acknowledged: religious leaders and activists, journalists, artists, teachers, unionists, academics, lecturers, chiefs like Molotlegi of Bafokeng, nurses, missionaries (some were expelled from the country), intellectuals, youth, grassroots organisations, civic leaders and so on.

I am not a historian. I am a citizen scandalised by the powerful who by their actions are dishonouring our struggle. They will continue to lose the support of the people until they understand our discontent.

We must place values and people first.