A French bishop defended the demolition of a migrant camp in northern France while urging greater help for displaced refugees and a “change of mentality” toward asylum-seekers. 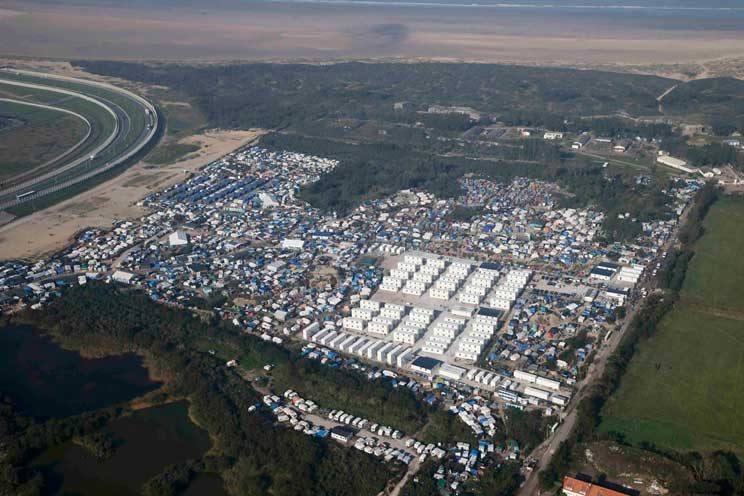 An aerial view shows the makeshift migrant camp “The Jungle” in Calais, France. French officials bused out more than 1,000 migrants Oct. 24, giving them a choice to remain in France or return to their home countries. (CNS photo/Pascal Rossignol, Reuters)

Bishop Jean-Paul Jaeger of Arras said the transfer of people from the camp in Calais, known as the Jungle because of squalor and overcrowding, was necessary because of “its unhealthiness and the precarious subsistence conditions” that exist there.

“These people have often been jeered at by the very networks which led them toward an imagined promised land. Their departure from our seaboard can and must be accompanied by increased respect, especially toward minors, single women and people in poor health,” said Bishop Jaeger, whose diocese encompasses Calais.

The bishop issued the statement as police bulldozers began levelling makeshift shelters that housed about 8,000 migrants from Asia, Africa and the Middle East who were hoping to cross the English Channel to Great Britain.

The archbishop said the high-profile action risked “releasing fears and defensive reflexes” among French citizens, but should also encourage reflection on “the fate of humanity.”

“Our frontiers are falling when we’re dealing with selling, buying, producing and circulating capital,” Bishop Jaeger said. “Should they be reinforced and hermetically sealed when human beings are displaced?”

“It isn’t human to content oneself with electoral slogans when the survival of fragile beings is in question,” he added. “A long work of reflecting, sharing, listening, understanding and welcoming is now indispensable.”

The camp was expected to be cleared by Oct. 31.

France’s Catholic La Croix daily said aid groups were providing food and blankets to those who remained at the site, including hundreds of unaccompanied minors housed in shipping containers.

The newspaper reported that thousands of migrants had fled, some toward Belgium and Germany, to avoid registration before the operation began, and said a “long column of smoke” was visible from a nearby highway as tents and shelters were set afire.

At his general audience Pope Francis said helping immigrants and refugees should be a task “that involves everyone, without exception,” but cautioned that the “silent work” of those trying to assist was “overshadowed by the noise of others who give voice to an instinctive selfishness.”

Meanwhile, the Brussels-based Commission of the Bishops’ Conferences of the European Union said in an Oct. 25 statement that many refugees reaching Europe, including up to 100,000 unaccompanied children in 2015, felt a “fear of rejection, violence and exclusion.”

At the same time, the mass migration “stirred unresolved fears in European societies,” where many people felt their “values and way of life” were threatened, the commission added.

In his statement, Bishop Jaeger said mass displacements could not be handled by “a single country or single town.”

He stressed, however, that welcoming outsiders was among the divinely ordained “works of mercy” recalled by the church in its Year of Mercy, and said a “change of mentality” was needed to recognise each migrant brought “their own originality and experience.”

“As Catholics, we accompany this slow, patient and difficult work with our prayer, which extends to migrants from all places and conditions, populations suffering dying under bombs, and victims of terrorist acts,” the bishop said.

“The time has come to build rather than dismantle. We must above all construct or reconstruct forms of respect for the human dignity of men and women who have quit their countries and families in atrocious and sorrowful circumstances.” By Jonathan Luxmoore Catholic News Service