A priest from West Virginia recently won a quarter of a million dollars on the trivia TV show Who Wants to Be a Millionaire and pledged to donate the money to a Catholic elementary school. 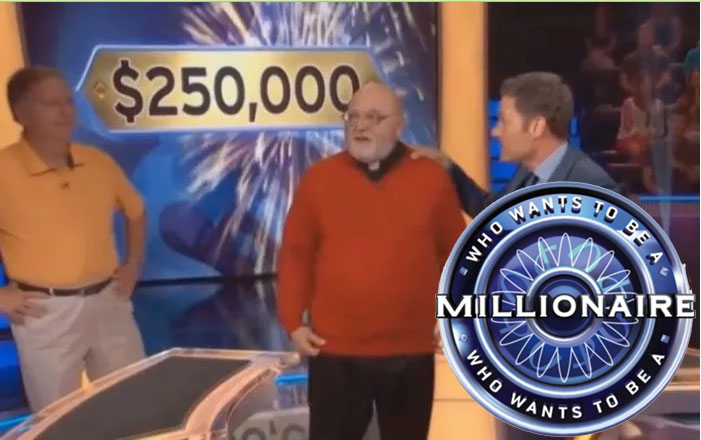 Fr. Bill Matheny had been trying to get on the trivia show Who Wants to Be a Millionaire for 17 years. This last summer, he finally fulfilled his dream, promising that he’d donate his winnings to St. Francis of Assisi Catholic School in St. Alban, West Virginia, which he attended as a child.

Using all three of his lifelines, he successfully won $250,000 before the show ran out of time.

He returned the next day to go for $500,000. Though he was leaning toward a particular answer, he wasn’t confident enough to go for it and decided to walk away with the $250,000. After making that decision, the show revealed that his guess would have been correct.

“If I were playing only for myself, I would’ve gone for it,” the priest told his local TV station in West Virginia.

“It seemed like that logical answer but I watch the show enough to know that when someone gets to this level what seems logical is not always the right answer. So I was concerned. If it were me, I would’ve risked it because I could’ve lived with $50,000 but for the school I couldn’t jeopardise $200,000.”

Though the show was recorded last summer, it was showed on TV in the S tates in September.

Celibacy Is Not a Church Imposition

50 Years a Priest: A ‘Blunt Instrument’ Thanks God
Share

‘Jesus was Not a Prince’ – Clergy are Warned

Clergy who use their position for personal gain rather than to help those in need do not follow the spirit...