Our Lady of Guadalupe’s Message Alive after Five Centuries

Nearly 500 years after Mexican peasant Juan Diego was greeted by Mary and urged to share a message of hope and comfort as promised by God’s compassion, Our Lady of Guadalupe continues to inspire new generations of faithful believers in their daily routines and struggles. 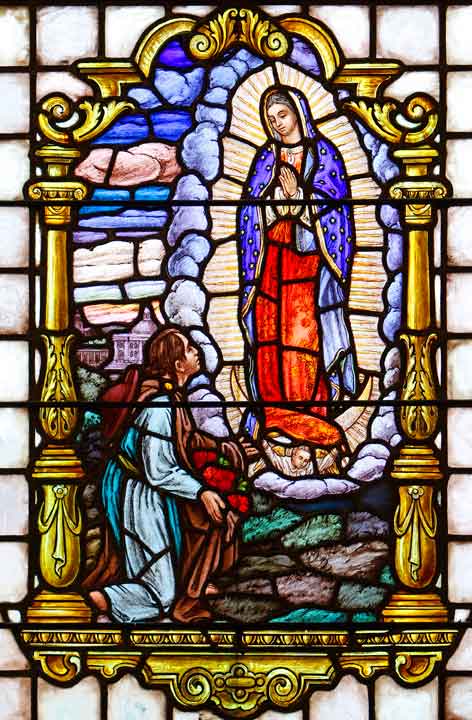 The appearance of Mary to indigenous peasant St. Juan Diego in 1531 near present-day Mexico City is depicted in a stained-glass window at St. Mary Church in Manhasset, N.Y. The feast of St. Juan Diego is celebrated Dec. 9, three days before the feast of Our Lady of Guadalupe, Dec. 12. (CNS photo/Gregory A. Shemitz)

That assurance, rooted in prayer and common experiences, guides daily individual devotion and communal gatherings that build toward grand observances of the apparitions centred annually on the Dec. 12 feast day.

And while Our Lady of Guadalupe is rooted in the Mexican culture, those who have studied the phenomenon and her message as it is lived today are finding that the patroness of the Americas, as she is known, can strengthen bonds of community in a disjointed world.

“In the United States she belongs to everyone. Even American Catholics have embraced her as a symbol of faith and devotion,” said Hosffman Ospino, assistant professor of Hispanic ministry and religious education at Boston College.

Ospino, a native of Colombia, said Catholic Latinos outside of Mexico have come to embrace the Guadalupe story because of their shared faith. That Mary presented herself to the indigenous Juan Diego, who was canonised in 2002, indicates that God cares for struggling and marginalized people everywhere, Ospino said.

“She appeared to someone who looked Latino, who was Mexican, and at a time in history when the situation of Juan Diego and the people was difficult,” he said.

Mexico in 1531, the year of the apparitions, was undergoing massive changes after the Spanish conquest of the Aztecs a decade earlier. Catholicism was taking root and indigenous religions were disappearing. Speaking in his indigenous language, Mary asked the future St. Juan Diego, an Aztec and Catholic convert, to convey to church leaders her desire for a church to be built on Tepayac Hill in what today is Mexico City. The Basilica of Our Lady of Guadalupe near the site, completed in 1976, is the most visited Catholic church in the world outside of St. Peter’s Basilica in Rome.

It took three visits by the saint-to-be to convince the local bishop that he indeed had seen Mary. It was on the third visit that the miracle attributed to Our Lady of Guadalupe occurred when he unfurled his poncho, or tilma, to present to the bishop the Castilian roses in full bloom that had inexplicably appeared on the hill despite freezing temperatures. More impressively, the tilma bore an image of Mary exactly as Juan Diego had described her: olive skin, pregnant with Jesus, adorned in a turquoise mantle and surrounded by rays of light.

Such an image of Mary adorns the homes of countless Mexican and Mexican-American families and serves as much as a cultural symbol and as religious one, said Oblate Father Bob Wright, professor of systematic theology at the Oblate School of Theology in San Antonio.

“You cannot separate the two of them,” he told Catholic News Service.

Such an attachment is readily apparent in the hundreds of celebrations of the feast of Our Lady of Guadalupe, which feature the singing of “Las Mananitas” (early morning song) and traditional dances along with a festive Mass, all followed, of course, by hearty food and drink.

Father Wright described the image of Our Lady of Guadalupe as “universal to everyone, a mother figure who looks after us, that you can turn to … just as Jesus himself you can turn to.”

A colleague, Oblate Father Fernando Velazquez, associate professor of missiology at the Oblate school, said devotion to Mary is carried out in daily life by many of Mexican heritage. It is customary, he said, for mothers or grandmothers to send children to school with a brief prayer that Mary and God’s mantle protect them throughout the day.

Perhaps it is no other group than women who have embraced a devotion to Our Lady of Guadalupe. From family prayer to weekly praying of the rosary among a group of women to sharing a statue of Our Lady of Guadalupe in processions from home to home, women have led the practice of prayer before Mary.

Nancy Pineda-Madrid, associate professor of theology and Latino/Latina ministry at Boston College, is writing a book on the religious symbolism of Our Lady of Guadalupe and how the message of a five-century-old apparition can be liberating for women today.

She called the appearance of Mary then a Pentecost moment for the church, serving to “transform fear and pain and suffering into a hope for life.”

“Her narrative, which is taking one of those living at the margins and talking about their dignity and coming to know their own sense of themselves with God in a way that’s deeply, deeply affirming,” Pineda-Madrid explained. “She speaks to that. That’s the reason she is such a powerful symbol to Mexicans today.”

Celebrations of the feast of Our Lady of Guadalupe this year in the U.S. may take on a more somber tone among Latinos who say they feel unwelcome because of increasingly sour rhetoric and strident calls for the deportation of millions of immigrants in the country without legal permission.

Because of the concerns arising from such talk, Renata Furst, associate professor of Scripture and spirituality at the Oblate school, finds that Mary’s message remains deeply relevant today. She said it helps people understand how important it is to be grounded in their culture and its values while seeing “the way God is recreating them” to respond in a changing world.

“The image of Our Lady of Guadalupe is extremely valuable for reading back into the Bible,” said Furst, who grew up in Honduras. She has observed that the images of a black Christ that appear in the border region of Guatemala, El Salvador and Honduras reflect a fusion of culture and faith in a way that people could better understand. So it is with Our Lady of Guadalupe and other lesser known apparitions of Mary in the Americas.

“You might look at Our Lady of Guadalupe as the source of this integration,” Furst said. “It is as though God is bubbling from the bottom up as opposed from the top down.”

Our Lady of Guadalupe also has influenced what scholar Rebecca Berru-Davis calls popular religion, or the faith practiced in the home.

Berru-Davis, who recently concluded a two-year postdoctoral fellowship at St. John’s University in Collegeville, Minnesota, explained that such the popular practice of religion can come through music, performing arts and even traditional foods. She saw how that popular religion was expressed while spending time over four years in Berkeley, California, with a group of Latino women who met weekly to pray the rosary before a statue of Our Lady of Guadalupe that travelled from home to home.

She focused on trying to understand the importance of such devotion in the women’s lives and how it was transmitted throughout the family. She said the devotion transcended age and continues to be transmitted to children.

“A devotion like this diffused the formal aspect of liturgy (in church) and the informal or the home religion, the popular religion,” Berru-Davis told CNS. “But it also said, ‘We’re carrying liturgy into the home and the virgin is the vehicle.’

“The women described it as ‘tela,’ a cloth that is placed over the community that brings them together, or ‘cadena’, a chain, that brought the community together,” she continued. “The women were very clear about that, that the devotion was continuing because it is what the Virgin wanted.” By Dennis Sadowski Catholic News Service