Bishop: ‘Mary is not Appearing in Medjugorje’ 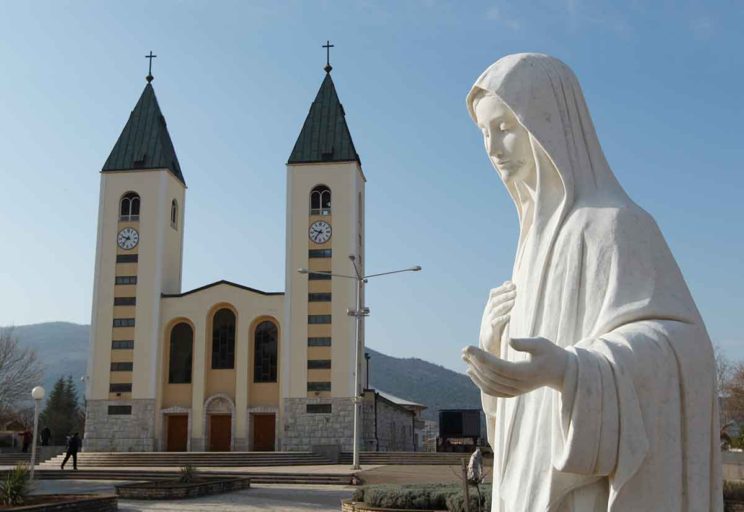 A statue of Mary is seen outside St. James Church in Medjugorje, Bosnia-Herzegovina. Pope Francis has appointed Archbishop Henryk Hoser of Warsaw-Praga, Poland, as his special envoy to Medjugorje, the site of alleged Marian apparitions. A Vatican statement said his role would be to study the pastoral situation in Medjugorje. (CNS photo/Paul Haring)

‘The Virgin Mary has not appeared in Medjugorje,” said Bishop Ratko Peric of Mostar-Duvno, the diocese in Bosnia-Herzegovina, which includes Medjugorje.

Two weeks after the Vatican announced that Pope Francis was sending a Polish archbishop to study the pastoral needs of the townspeople and the thousands of pilgrims who flock to Medjugorje each year, Bishop Peric posted his statement on his diocesan website.

Three of the six young people who originally claimed to have seen Mary in Medjugorje in June 1981 say she continues to appear to them each day; the other three say Mary appears to them once a year now.

Bishop Peric noted that a diocesan commission studied the alleged apparitions in 1982-84 and again in 1984-86 with more members; and the then-Yugoslavian bishops’ conference studied them from 1987-90. All three commissions concluded that it could not be affirmed that a supernatural event was occurring in the town.

The six young people continued to claim to see Mary and receive messages from her, and tens of thousands of pilgrims visited the town — and the alleged visionaries — each year. Pope Benedict XVI established a commission that worked from 2010-14; and the Congregation for the Doctrine of the Faith began looking at that commission’s report in 2014.

The position of the diocese of Mostar-Duvno “for this entire period has been clear and resolute: these are not real apparitions of the Blessed Virgin Mary”, Bishop Peric wrote in his statement, which was posted in Croatian and Italian.

Some people, he said, believe the apparitions were real at least at the beginning — perhaps for the first week — but that the young people continued to claim to see and hear Mary “for other reasons, most of which are not religious”.

Bishop Peric said a study of the transcripts of interviews with the six alleged visionaries from that first week give several motives for suspicion if not total doubt about the supernatural nature of events.

First, he said, the Mary of Medjugorje usually speaks only when spoken to, “she laughs in a strange way, in response to certain questions, she disappears and then returns, and she obeyed the ‘seers’ and the pastor who made her come down from the hill into the church even against her will. She does not know with certainty how long she will appear, she allows some of those present to step on her veil lying on the ground, to touch her clothes and her body. This is not the Gospel Mary”.

The seventh time Mary allegedly appeared on June 30, 1981, five of the youngsters were in a nearby town called Cerno and claimed to have seen Mary there. Bishop Peric said that in the recorded interviews, all five reported that the apparitions would continue for only three more days, July 1-3, 1981.

“Then she changed her mind and still ‘appears’,” the bishop wrote.

“Taking into account all that was examined and studied by this diocesan curia, including the study of the first seven days of the presumed apparitions, one calmly can affirm: the Virgin Mary has not appeared in Medjugorje. This is the truth that we uphold, and we believe in the word of Jesus who said the truth will set you free.”—By Cindy Wooden, CNS

Why Mary was Assumed into Heaven

Australia’s five archbishops said they would consider asking the Vatican for clarification on concerns raised in a government inquiry into...