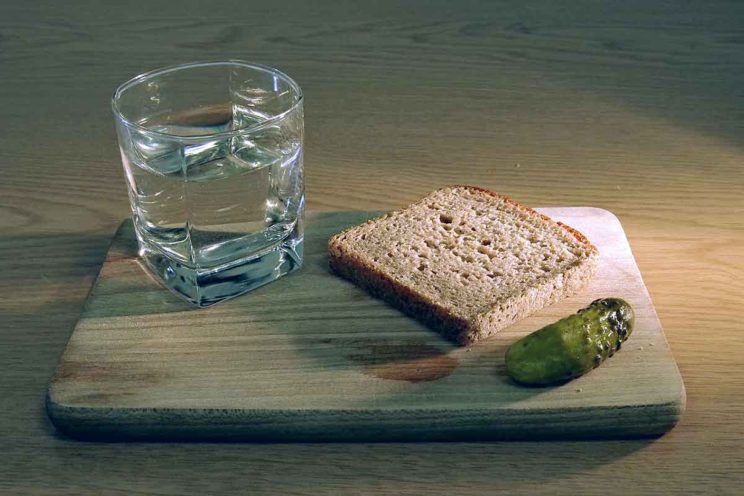 There is no getting around fasting during Lent.

Not only is it one of the three pillars of spiritual practice along with prayer and almsgiving, but it also bookends the period of preparation for Easter.

Fasting and abstinence is required of adult Catholics, ages 18-59, at the start of Lent on Ash Wednesday and at its end on Good Friday. This means eating only one full meal and two small meals that equal one meal as well as no snacks in between meals and no meat consumption.

Creighton University’s Online Ministries program, “Praying Lent 2017,” says the purpose of fasting is to “experience the effects of not eating. It also serves to be a penance or a sacrifice for the purpose of strengthening us.”

“When we get hungry, we have a heightened sense of awareness,” it adds, noting that the practice helps people to clarify their thoughts. “It is purifying and prepares us to pray more deeply,” the resource from Jesuit-run Creighton University in Omaha, Nebraska, points out.

“Jesus says when we fast, not if,”

In addition to the two days of fasting, Catholics 14 and older are obligated to abstain from eating meat during Fridays in Lent.

The Friday practice is a sacrifice meant “to help Catholics make much bigger sacrifices,” the Creighton resource says, pointing out that not eating meat doesn’t give someone permission to eat a fancy fish meal. And for vegetarians, it could mean abstaining from a favourite meal.

Fasting, which has deep roots in many religious traditions, is meant to draw participants into deeper prayer and also link them with those in need.

For Christians, the tradition has roots in both the Old and New Testaments. In the Gospel of Matthew, Jesus tells his disciples how they should look when they are fasting — not gloomy, not neglecting their appearance and with their faces washed so they do not appear to be fasting.

“Jesus says when we fast, not if,” said Father John Riccardo, pastor of Our Lady of Good Counsel Parish in Plymouth, Michigan.

He said the key to fasting is to attach an intention to the practice “rather than seeing it as a flexing of our self-discipline muscles.” It makes the practice “not about me but someone else,” he said.

“Fasting is heavy artillery,” he added because the person doing it is denying themselves something and trusting that God will use it.

Although fasting is technically not eating food, giving something up can also be a form of fasting.

Msgr. Charles Murphy, author of the 2010 book: “The Spirituality of Fasting: Rediscovering a Christian Practice” said there are two forms of fasting – total and partial. A total fast is eating nothing and drinking nothing for a designated period of time where a partial fast involves giving up certain things for a specific period of time.

Partial fasting is a popular part of Lent where people choose to give up something such as soda, candy, beer, television or more increasingly, social media.

The top things people said they were going to give up this Lent, according to OpenBible.info, a Web search engine that examined Twitter posts during the week of Feb. 26, included a mix of social media and food and one wishful thinking: school. The only other top 10 mention that wasn’t a food or drink was to give up swearing.

Partial fasting, just like a full fast, shouldn’t be done to benefit the person doing it. “It’s not to make us more narcissistic, which it can do,” said Paulist Father Jack Collins, who helped Busted Halo, the Paulist website, with videos like “You don’t know Jack about Lent” a few years ago.

“We don’t fast to feel good, but to remind ourselves that half the world goes to bed hungry,” he said, adding that it’s a way of reminding us “we are our brother’s keeper.”

Paulist Father Larry Rice, director of the University Catholic Centre at the University of Texas at Austin, is not keen on people looking for a loophole in their fasting practices, for example saying that Sundays don’t count and they can have whatever they gave up that day.

“I get that people want a pressure relief valve, ” he said, “but when I open my missal it says the First Sunday of Lent” meaning Sunday counts.

The U.S. Conference of Catholic Bishops gives a little leeway here. In its fasting guidelines it notes that if someone is giving something up for Lent it is more effective if it is continuous — “kept on Sundays as well. That being said, such practices are not regulated by the church, but by individual conscience.”

Father Rice, who is giving up riding elevators for Lent, said the Catholic college students he works with typically give up a food or social media. “They won’t give up texting. That would be like giving up breathing,” he added.

This age group, and Catholics at large, could take a small step toward a phone fast by following the initiative of the Archdiocese of Hartford, Connecticut, which urged Catholics to not use their phones on Ash Wednesday and Good Friday this year “as a way to reflect on God and the meaning of the Easter season.” By Carol Zimmermann Catholic News Service