A Manly Lent? Lent Through a Man’s Lens 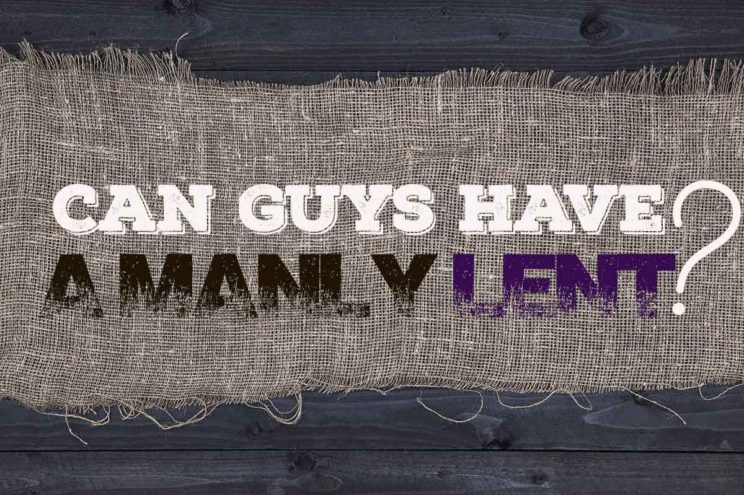 Every year about this time, the discussion among the men in the office turns to Lent. Or rather, “What are you giving up for Lent?”

One time, I asked another guy, “What are you giving up?”

“The Leaven,” he smirked.

Right. Never heard that one before.

Giving up The Leaven is not one of my options but, this year, the annual question got me thinking. Guys and giving things up for Lent – what’s that all about?

Back in the day, the men of my father’s generation used to give up things like beer, booze, smokes and coffee.

And, of course, there was the traditional Lenten giving up of meat on Fridays. Goodbye, yummy meatloaf – hello grim, penitential, baked tuna casserole.

Among men there is something about “giving up” that resonates with the masculine soul. Perhaps this is so because it can be seen as a sort of “ordeal,” a test of one’s strength of will and worthiness.

But this sort of “manly” approach to Lent falls short. Lenten “giving up” is not about proving our strength and our worthiness. As we engage in our Lenten discipline of “giving up,” we sometimes fail.

Or in my case, inevitably fail.

Failing when we’ve vowed to “give up” something for Lent does not equal a failed Lent. Quite the opposite.

Trying – and often failing – teaches us about our weakness and dependence upon God.

Even if you can keep your Lenten discipline perfectly, you are still a sinner who needs Christ’s redemption. You can’t save yourself no matter how hard you try. God’s grace is essential.

The three pillars of Lent are prayer, fasting and almsgiving. Practicing these things requires discipline and “dying” to oneself. We join our Lenten disciplines to the sufferings and death of Christ, killing off sin in our lives and increasing our – brace for it – love.

God, through his love, gives us forgiveness and grace. Grace is a sharing of his own divine life that we cannot earn and do not deserve.

Lent is a time for a true conversion of our hearts. So how does a guy have a “manly” Lent?

First off, give up phony motivations. Be authentic by getting in touch with Lent’s eschatological vibe. “Eschatological” is a $20 word that means “dealing with the final things” — among them, your death and eternity. Lent is not just a good excuse to lose weight. Sure, losing weight for many is a good thing. However, Lenten fasts and disciplines are not about making you good for the swimming pool, but good for eternity.

Second, give up “gaming” Lent. No meat on Fridays during Lent, eh? So you gorge yourself at Lobstermania. This is a form of legalism. Lenten disciplines should enable us to experience a little discomfort and denial. It helps us to be less attached to temporal things and strengthen our character to resist sin and temptation. Be real about it.

Third, give up Lenten laziness. Be intentional about Lent. Rededicate yourself to the traditional pillars of Lent: fasting, prayer and almsgiving. Do all the traditional Lenten devotions, like Stations of the Cross, frequent reconciliation, and more time spent in prayer and reading the Bible.

Fourth, give up just fasting from food. Giving up things like fast food, salt, sugar, etc., is all well and good. Go ahead and give them up. But have you considered giving up control of the TV remote? Or giving up screen time on your computer or other devices?

Fifth, give up a weekend monopolised by watching sports. Ouch, this hurts! What about the Final Four? “Giving up” is supposed to be meaningful. It’s useless to give up something you don’t care much about or is easy to surrender. A little rigor (just a little, mind you!) is good. Instead of spending hours watching game after game, take that time and spend it with your family.

Sixth, give up being a jerk. Wow, that’s a big category. Do you drive aggressively? Are you a gentleman on social media? Do you give respect to others no matter who they are? Do you “mansplain”? (In case you didn’t know, “mansplaining” is when a guy explains something to a woman — who may know better anyway — in a condescending way.) Disciplining yourself not to be a jerk is an exercise in generosity and humility, which are necessary for a strong spiritual life. Some guys are “street angels and house devils.” If you’re going to give up being a jerk, make sure it starts at home.

Seven, give up “going it alone.” Yes, we idealise the rugged individualist but, spiritually speaking, this is perilous. Get a Lenten buddy … or two or three. Get together to pray and to talk. Don’t let it devolve into a social time. Keep it relevant, honest and spiritual.

The list can go on just about forever. But it would be hard for a person to do even all seven of these — so give up taking on too much and setting yourself up for failure.

And when Lent is over, don’t give up. Lent is about renewal, about a change for the better. Keep up with some of your Lenten disciplines.

And don’t give up when you sin and fail.

It’s not the failures that count. Rather, what counts is the repenting and getting back up to live a life transformed by Christ.

Oh, yeah, and DON’T give up The Leaven. Reading my articles might be just the penance you need to get into heaven.

Senior reporter Joe Bollig of The Leaven, newspaper of the Archdiocese of Kansas City, Kansas, wrote this commentary titled “Men, give it up” offering some tips for a meaningful Lent.