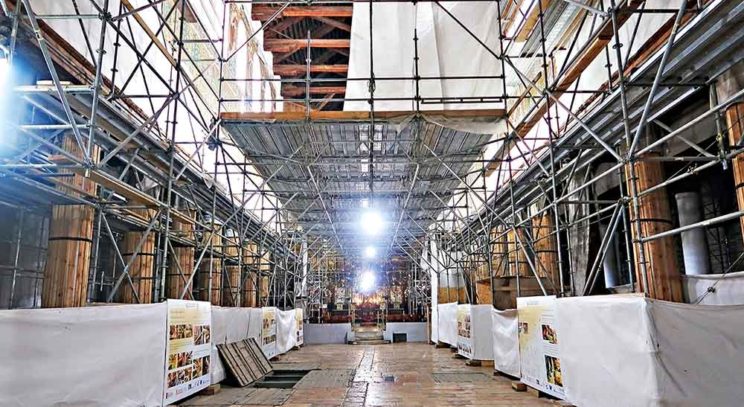 Restorations at the church of the Nativity in Bethlehem. (Photo: Günther Simmermacher)

As Catholics commemorate Jesus’ passion on Good Friday, the Vatican is asking them to support the Church in the Holy Land with their prayers, financial contributions and possibly by making a pilgrimage.

The global Holy Land Collection is taken up in most dioceses around the world on Good Friday, which is on April 14 this year.

The sites of Jesus’ birth and of his death and resurrection have been undergoing restoration work and the Franciscan Custody of the Holy Land announced in late March that the Vatican had pledged a further R13 million for the second phases of projects at the basilica of the Nativity in Bethlehem and the church of the Holy Sepulchre in Jerusalem.

The first phase of the work in Jerusalem, which repaired damage and reinforced the edicule of the Tomb, believed to be where Jesus was laid to rest after his crucifixion, has been completed and the hoped-for second phase of the project would seek to resolve problems due to moisture under the floor around the edicule. Work cannot begin, however, until details of the project are agreed upon by the Catholic, Greek Orthodox and Armenian Orthodox communities that share responsibility for the church.

The work in Bethlehem has restored Crusader-era mosaics and brought to light some that had been plastered over; the next phase — again pending ecumenical agreement — would include work on the church columns, floor mosaics and the grotto, which is marked as the birthplace of Jesus.

Releasing material about the annual Good Friday collection, the Vatican noted that the presence of Christianity in the Holy Land is not limited to historical sites and places of pilgrimage. “A Christian community has remained in the region down through the centuries, even at the cost of great sacrifice and martyrdom.”

The collection ensures not only that the buildings remain accessible, but that local Christians are able to stay in their homeland.

Cardinal Leonardo Sandri, prefect of the Congregation for Eastern Churches, which coordinates the collection, also noted that pilgrimages are an essential support for the Church in the Holy Land.

“A journey to the sacred places in the footsteps of Christ can not only lead the pilgrim to a revival of his faith and a rediscovery of his origins, but it can also serve as a powerful instrument in the new evangelisation,” the cardinal said.

Additionally, he said: “Pilgrimages are an essential resource for the Christian population of the Holy Land. In fact, according to recent statistics, at least 30% of the local community in Jerusalem and in Bethlehem live and work thanks to the presence of pilgrims.”

According to Cardinal Sandri’s office, the Holy Land Collection in 2015-16 brought in more than R90 million.—By Cindy Wooden, CNS

Path to the Passion: The Two Trials Of Jesus

Path To The Passion: Jesus Dies On the Cross – And Christ Is Risen
Share