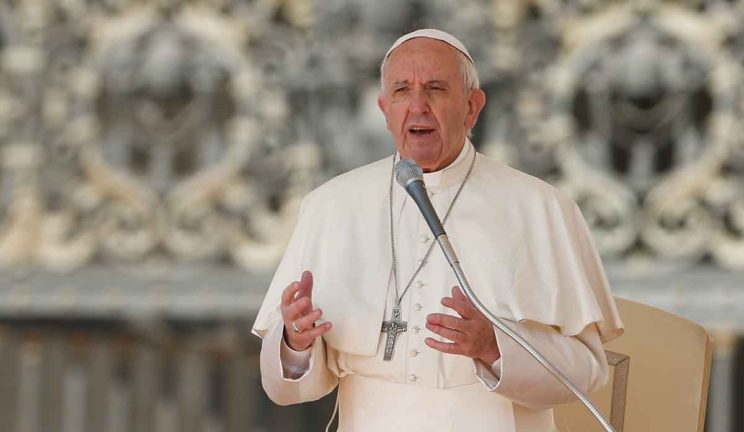 The cross, loving service and humble sacrifice are the only way to overcome evil and give hope to the world, Pope Francis said.

Those who love their own lives and always hunger for more are the losers, the pope said at his weekly general audience.

Rather, those who readily serve others and “live God’s way” are the winners, who “save themselves and others, becoming seeds of hope for the world,” he said.

This seemingly illogical process is the source and strength of Christian hope, Pope Francis said, continuing his series of talks on the unique nature of this hope.

Jesus explains the new kind of hope he offers in a verse from the Gospel according to John when he says, “unless a grain of wheat falls to the ground and dies, it remains just a grain of wheat; but if it dies, it produces much fruit. Whoever loves his life loses it, and whoever hates his life in this world will preserve it for eternal life.”

It is only when a seed splits apart and opens up that it can give rise to new life that grows and gives abundant fruit, the pope said.

Jesus himself followed this process by “falling to the earth” from his celestial glory as a small baby, like a tiny grain of wheat.

“But that was still not enough. To bear fruit, Jesus lived love all the way, letting himself be broken by death like a seed under the earth. Precisely there, at that extreme point of his lowering himself, which is also the highest point of love, hope germinated,” sprouting forth because of the power of love, he said.

That is why with his death and resurrection, God made everything new, transforming “our sin into forgiveness, our death into resurrection, our fear into faith. That’s why, there on the cross, our hope was born and is always reborn.”

That is why Jesus is the one who can always turn every single dark moment into light, “every defeat into victory, every disappointment into hope,” he said. “Hope overcomes everything because it is born from the love of Jesus who made himself be like a grain of wheat on earth and died to give life” – a life full of the love that comes from hope.

When people begin to choose God’s way, they soon discover the victorious path in life is the life of a seed and humble love, he said. “There is no other way to defeat evil and give hope to the world.”

Real love must follow the cross and sacrifice, not as its goal, but as the necessary path to true glory and new life, the pope said.

“Love is the engine that drives our hope forward,” and people need to learn to love more and more each day.

One can see how a life built on having and possessing, rather than giving and serving, leads nowhere, the pope said. Voracious greed is never satisfied – the more one has, the more one wants and “that is a terrible thirst.”

Instead, “it’s wonderful to help others, serve others,” he said, because though it may be tiring, “the heart fills with joy and hope.”

The pope asked people to contemplate the crucifix every day and tell Christ, “With you, nothing is lost. With you, I can always have hope. You are my hope.”

“Bit by bit, we will realise that hoping with Jesus is learning to already see the plant inside the seed, Easter in the cross, life in death.”  By Carol Glatz Catholic News Service