Pope: End fear, False Beliefs about Refugees by Getting to Know Them 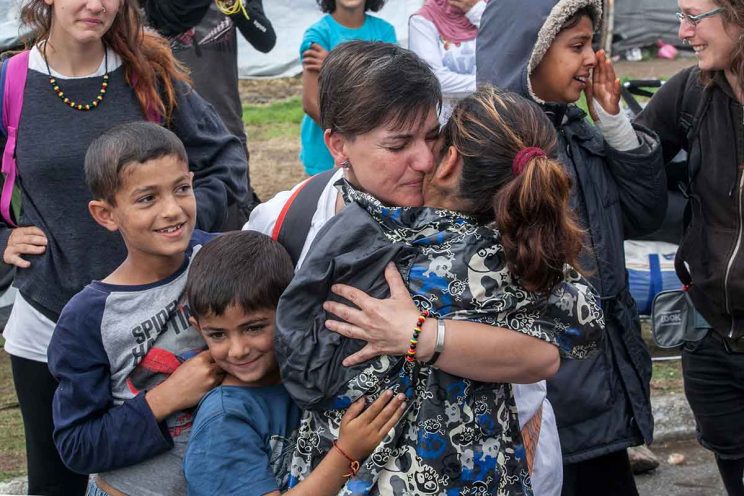 A volunteer from a humanitarian organisation embraces refugee children in 2016 at a makeshift camp in near Idomeni, Greece. Getting to know someone who is a refugee can wipe away fears and dismantle distorted ideologies, Pope Francis said. (CNS photo/Nikos Arvanitdis, pool via EPA)

Getting to know someone who is a refugee can wipe away fears and dismantle distorted ideologies, Pope Francis said.

Highlighting World Refugee Day, which is marked June 20, the pope asked that “concrete attention go to the women, men and children fleeing from conflict, violence and persecution.”

After praying the Angelus with visitors in St. Peter’s Square June 18, he also asked that people pray for all those who have lost their lives on land or at sea in their attempt to flee for their lives.

“Their stories of heartache and hope can become opportunities for fraternally coming together and truly getting to know each other,” the pope said.

“In fact, personally meeting with refugees dispels fears and distorted ideologies” and becomes a way for people to grow in their humanity as they learn to make room for an attitude of openness and the building of bridges, he said.

The year 2016 saw the highest number of refugees and internally displaced people ever on record, it said, with 65.6 million people being away from their homelands, 300,000 people more than at the end of 2015.

World Refugee Day, held every June 20, commemorates the plight and strengths of the world’s refugees and asks that people show support for families forced to flee.