Theologians: Did Luther Split needed to be a ‘Church-Dividing’ Event? 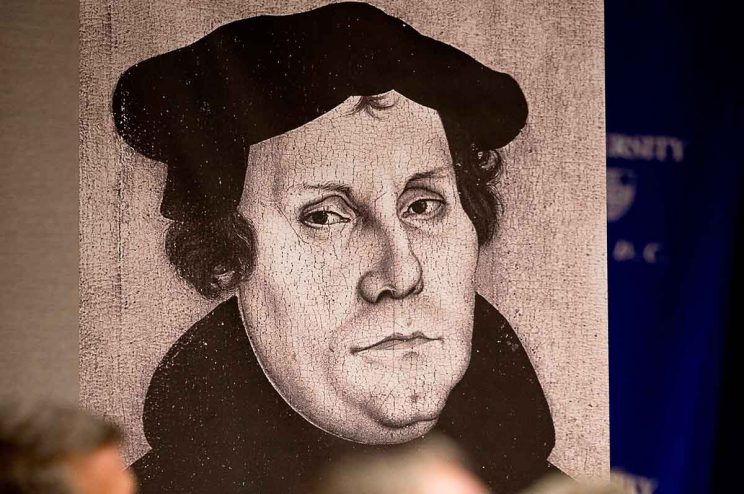 Attendees listen to Cardinal Kurt Koch’s talk about Martin Luther and the Reformation at The Catholic University of America in Washington. The Swiss cardinal is president of the Pontifical Council for Promoting Christian Unity at the Vatican. (CNS photo/Tyler Orsburn)

Did the split between Martin Luther and the Catholic Church in 1521 have to be what theologians call a “church-dividing” event?

That is the question some theologians and historians are asking in 2017, the 500th anniversary of Luther’s posting of his 95 theses on a church door in Wittenberg, Germany.

Yet despite the question being asked, the answer is not immediately clear.

To say no, suggested Kenneth Appold, a professor of Reformation history at Princeton Theological Seminary in New Jersey, one would have to identify some mechanism in the Catholic Church of the early 16th century that could have kept Luther in the fold.

“If we cannot be sure” such a mechanism was in place then, he asked, “how can we be sure that it would not be repeated today?” He later took note of a comment made by Blessed Paul VI that the church itself could pose “the greatest obstacle to Christian unity.”

Appold made his remarks on the opening day of a three-day conference, “Luther and the Shaping of the Catholic Tradition,” held at The Catholic University of America in Washington.

The conference was co-sponsored by Metropolitan Washington, D.C. Synod of the Evangelical Lutheran Church in America, Catholic University’s School of Theology and religious Studies, the Vatican’s Pontifical Committee of Historical Sciences, and the U.S. bishops’ Secretariat for Ecumenical and Interreligious Affairs.

Another question, according to Appold, remains as to whether Luther had intended to form a separate church from the outset, or felt he had no choice but to do so after his agitations against the church to reform itself – particularly over the sale of indulgences – met with resistance by the Vatican and its emissaries dispatched to try to rein in Luther.

Although Luther, were he active today, might not pose the threat to the church he did 500 years ago, Appold said, it is not so easy to walk back the condemnation of Luther that made the breach permanent.

“Catholic research on the life and work of Martin Luther in the end of the 19th century owed an ecumenical question from the outset,” said Wolfgang Thonissen, a German Catholic theologian who teaches ecumenical theology at the Faculty of Theology in Paderborn, and is director of its Institute for Ecumenism.

“The emerging Catholic Lutheran research of the 20th century is the driving force of the international ecumenical movement,” Thonissen said. “The results of this research are, surprisingly, not limited to theology and ecumenical dialogue, but are successively absorbed by the magisterium of the Catholic Church and the popes after the Second Vatican Council, at least implicitly.”

Thonissen named document after document from Vatican II, pointing out sections that contained elements of the research he had cited. The phrase, “The church is always is need of reform” – first cited by Swiss Reformed theologian Karl Barth in 1947 – has been used since Vatican II to distill the spirit of the council.

“Catholic doctrine can today speak of Martin Luther as a witness of Jesus Christ and theological teacher, as a Catholic reformer, without having revised the condemnations in the 16th century so far,” he added.

Diakonia Gears up for Good Friday Procession in Durban
Share