Thanks ‘Bee’ to God: Beekeeper Honoured for Service as Catechist 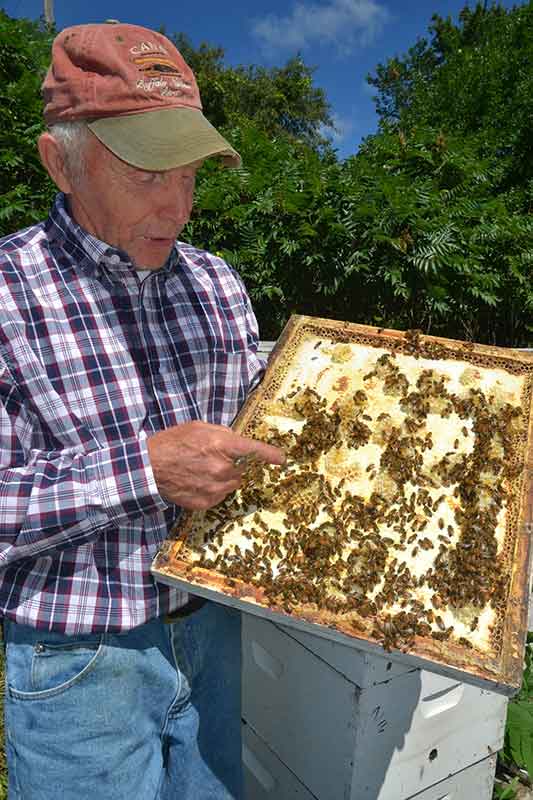 Bob Fassbinder holds a bee hive from one of his apiaries near Elgin, Iowa. The beekeeper and volunteer catechist is a member of St. Peter Parish in Clermont, Iowa. (CNS photo/Dan Russo, The Witness)

Bob Fassbinder, a beekeeper, uses his love for creation as a tool to reach children while teaching them catechism.

On a recent sunny Saturday morning, Bob Fassbinder and his wife, Kathy, were surrounded by a chorus of buzzing bees as he held up a hive full of honey.

Running his fingers over the perfect hexagonal shapes made by the small insects to catch a drop of this year’s crop for a taste test, he couldn’t contain his enthusiasm.

“This is part of God’s creation right here, and this is one of the most beautiful things he ever did was to make the honey bee, and we just stumbled onto it, right dear?” said the professional beekeeper as he glanced at this wife. “One honeybee for our garden in Des Moines and from there (to this).”

The Fassbinders, members of St. Peter Parish in Clermont, are owners of Fassbinder Apiaries, a beekeeping business with its headquarters near Elgin.

The couple also are active members of their church, where Kathy sings in the choir and Bob has been a volunteer catechist to middle and high school students for 40 years and counting.

Bob was recently honoured for his service teaching the faith at a special Mass concelebrated by Father Dale Rausch and Archbishop Michael O. Jackels of Dubuque. His four children and seven grandchildren attended, along with a large contingent of the local Catholic community.

At a reception afterward, the parish presented him with a statue of St Francis, two custom engraved stones and about 50 letters from former students thanking him.

“It was impressive,” Bob recalled in an interview with The Witness, newspaper of the Archdiocese of Dubuque. “They sprung a surprise for me. It was on Father’s Day. I’m grateful for my church.”

Mary Olson, St. Peter’s coordinator of religious education has worked with Bob for years and witnessed his talents in the classroom.

“(Bob) is able to form a relationship with all types of children,” said Olson. “His curriculum is just from his heart. The Holy Spirit just comes through him. I think the kids learn through that more than out of a book.”

After growing up on a farm near his home parish, Bob served on submarines in the U.S. Navy. He met his wife, a Cedar Rapids native, while studying at Iowa State University. Graduating with degrees in engineering and nutrition, respectively, the couple married and moved to Des Moines.

The farm boy didn’t take to big city life. While there, he and his wife developed an interest in beekeeping and eventually planned to start a business near Bob’s hometown.

In 1976, the Fassbinders moved back to northeast Iowa, finding a place in the country off a gravel road. They took a risk starting an apiaries operation – the technical term for places where bees are kept. 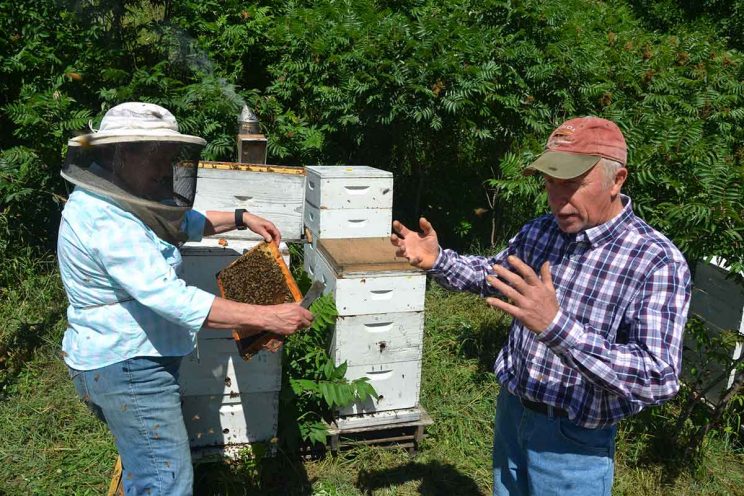 Raising Bees and the Faith

Coming from city life into the country to raise bees, Kathy explained, has had a profound effect on the spiritual life of her and her husband.

“It makes you aware of the different flowers that are out there, the trees that maybe we would have been too busy to really pay attention to otherwise, not thinking they were all that important,” she said. “I think previous to being in the bees, we would have taken much more for granted and not even been thankful for it. We really need to be thankful for a beautiful world.”

Bob spends a lot of time in nature, either tending to his hives at 60 different locations up and down the Turkey and Volga rivers or as a hunter. He has used this connection to creation as a teaching tool.

“Going back to a classroom, when you teach the kids the four reasons to pray – one of them is praise,” he said. “When you just step out on a day like today when all the things are blooming and I’m watching the bees work and doing their things, I can’t help but say, ‘God, this is beautiful. This is fantastic. You are doing your best work when you did this right here.'”

In 1977, shortly after starting the family business, Bob was recruited in his early 30s to teach the faith at St. Peter’s to middle school and high school teens. In 1980, he was made director of religious education. Now in his 70s, he currently works with ninth and 10th graders who stick with him through a two-year confirmation prep program.

What Makes a Good Catechism Class?

Bob’s ministry as a catechist was not all smooth, and it took a while for him to find the best way to reach his students. After a lot of effort to search for the best curriculum, he said, he “just started using life stories that applied to their lives. … The discipline problems I had early on went away.”

Bob uses books, videos and other traditional resources when appropriate.  However, the foundation of his classes are based on stories from his experiences as a Navy veteran, father, beekeeper, former wrestling coach and so on.

He plans to continue teaching as long as he can. He says the key to being a good catechist is simple.

“You have to show them this is what you believe and that it is important to be happy,” Bob said. “You’ve got (to make the students) realise that happiness is the product of a meaningful life and to be happy, you’ve got to be doing something meaningful, and not just for yourself. It’s service.”