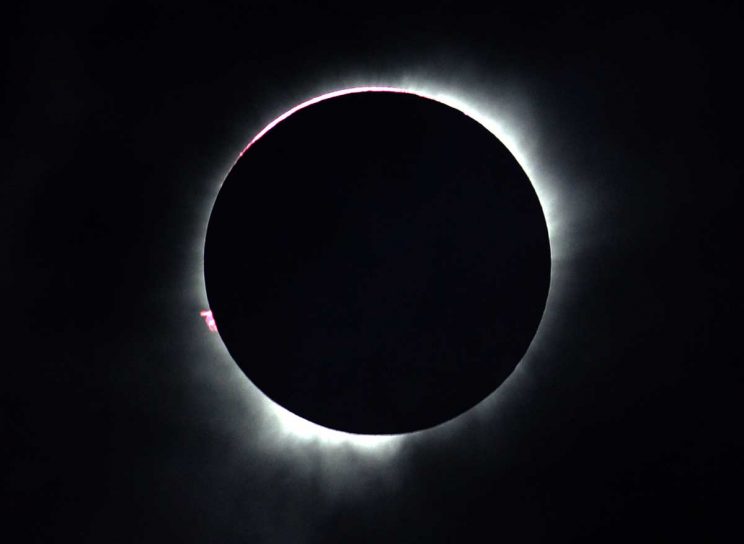 A priest has used the weeks leading to the eclipse as an opportunity to educate parishioners about the beauty of an eclipse with a bit of biblical catechesis thrown in.

The word from some quarters is that the August 21 total solar eclipse is a harbinger of the end times, but one Wisconsin priest hardly thinks so.

Father James Kurzynski, an amateur astronomer, said the cross-country eclipse is an opportunity to reflect on humanity’s relationship to creation and build stronger bonds with God while enjoying a rare astronomical event.

The total solar eclipse is the first to be seen from coast to coast since 1918. The 70-mile-wide eclipse path spans the continental U.S. from Oregon to South Carolina. Totality begins at mid-morning Pacific time on the West Coast and the moon’s shadow races across 14 states in about 90 minutes, ending at mid-afternoon Eastern time.

The celestial event is giving Father Kurzynski, pastor of St. Joseph Parish in Menominee, Wisconsin, the opportunity to connect biblical passages that metaphorically describe the darkening of the midday sun, the moon and the stars with a call to welcome God’s mercy into their lives.

Father Kurzynski has found references to eclipses in throughout the Bible from the Old Testament to the Book of Revelation. Such references suggest that ancient people understood that eclipses occurred regularly and used symbolic language to call people to end their sinful ways, Father Kurzynski said.

The priest has used the weeks leading to the spectacle as an opportunity to educate parishioners about the beauty of an eclipse with a bit of biblical catechesis thrown in.

It’s a World of Wonders not the End of Time

Father Kurzynski also has used the opportunity to refute some religious claims that the eclipse marks a dark time, perhaps even the end times.

“I’ve tried to lay out to parishioners to watch a solar eclipse from a scientific perspective. It’s beautiful. Don’t fear it and don’t fear the world is going to end by watching it,” he said. “But if you are looking for a faith dimension and do have a sobering moment, how do we understand it?”

Father Kurzynski has written twice about the eclipse on The Catholic Astronomer blog on the Vatican Observatory Foundation website. His first column challenged the “conspiracy theorists” who predict the eclipse marks the end of the world. He laid out a careful argument, citing passages from Sirach 17:29-32, Job 3:3-5, 38:1-15 and Jeremiah 10:1-2. These passages urge people to avoid thinking that the end of the world is coming because the sun darkens, but “to turn instead to the mercy of God to bring light into our lives.”

“It becomes so difficult for me as a priest to try to show people the beauty of these things,” Father Kurzynski said, “and unfortunately what often rules the day is the news, the noise, the misconceptions.”

He also pointed to the fact that astronomers have calculated eclipses over the centuries and know exactly where and when eclipses will occur and how long they will last for the next 1,000 years and beyond. It’s all a matter of physics and understanding the periodicity of the orbits of the earth around the sun and the moon around the earth.

“I’m really trying to focus with my parish in the weeks to come on the celebratory aspect of it. In this world of wonders, here is this special wonder that can be given to us,” he said. 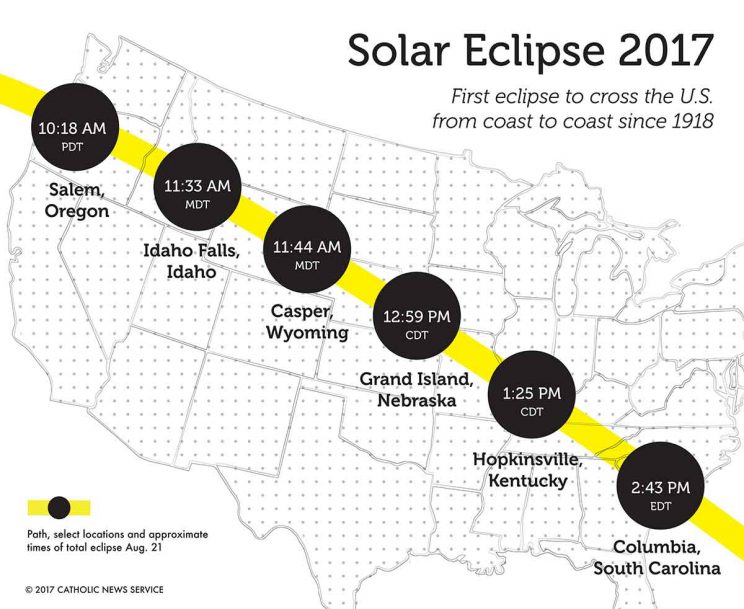 The solar eclipse of Aug. 21 is the first to cross the United States from coast to coast in 99 years. About 12.2 million people live in the path of totality and millions more are expected to travel into it to view the rare event. (CNS/Nancy Wiechec)

What the Scriptures Say

The Bible is helping him in that task.

Scripture, the priest explained, regularly establishes that “creation, by its nature, gives glory and praise to God. When we transgress that relationship with God, creation itself mourns too.”

He hopes to help people understand that the prophetic words found, for example, in Isaiah 24:3-13 and 24:19-23 identify the “dis-order” between God’s people and creation. “It’s a sign of … how a creation that isn’t treated from a standpoint of stewardship reflects negatively on the world,” he said.

Father Kurzynski believes that the eclipse and such biblical passages invite the faithful to open their hearts and minds to the lives of people around the world who are suffering because of environmental degradation and climate change.

“We don’t allow the impact of the environment to be felt,” he said. “We can create an environment in our home. Putting on the air conditioner when we are hot. Turning up the heat when it gets brutally cold. We can adapt to the culture through artificial means.

“Are we able to take a moment and see how these symbols can be used in a healthy way to ask ourselves, ‘What is our relationship with God?’”

Taking a New Approach to Catechesis on Different Levels

Jesuit: Without the Amazon, ‘We all go Under’
Share

Looking back at the history of the Church in South Africa and Australia - Australia fell under the Cape in...