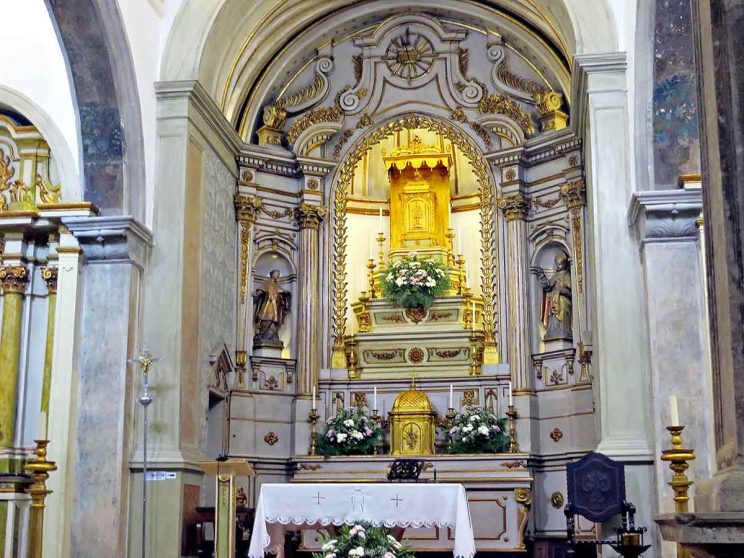 The church of the Holy Miracle in Santarém, Portugal. The Eucharistic miracle is kept in the tabernacle above the altar and can be viewed close-up. The columns on either side of the photo are from the old St Stephen’s church. The Southern Cross/Radio Veritas pilgrimage to Portugal and Spain in October will visit the church. (Photos: Günther Simmermacher)

The Church recognises more than a hundred Eucharistic miracles that have occurred over the centuries. Professor Michael Ogunu looks at four of the most famous ones.

Eucharistic miracles are God’s extraordinary interventions. They are meant to confirm faith in the real presence of the body and blood of our Lord in the Eucharist.

This marvellous change is called transubstantiation — the passage of substance. Of the bread and wine there remain only the appearances or species, which in philosophical terms, are called accidents. In other words, only the dimensions, colour, taste, and smell remain. But the substance, that is to say, the true reality does not remain, for it has become the Body and Blood of the Lord.

The Eucharist is the highest expression of our life in Christ, for it unites us sacramentally to Christ in the sacrifice of the Cross, which is made always new in the celebration of the Holy Mass.

The Miracle of Lanciano

In the town of Lanciano, on Italy’s eastern coast, around the year 700 there was a priest who, though learned in the sciences of the world, was ignorant in the ways of God, and was not strong in his faith.

He was plagued by a doubt about the mystery of transubstantiation.

One morning, he was celebrating Mass in the church of St Longinus. He had already said the words of consecration when his doubts weighed upon him more heavily than ever. Spontaneously, he saw the bread changed into flesh and the wine into blood, coagulating into five globules.

Frightened and confused, he stood quite a while, but eventually his fear gave way to spiritual happiness, and he turned his joyful, tearful face to those around him, exclaiming: “Behold the flesh and the blood of our most beloved Christ.” 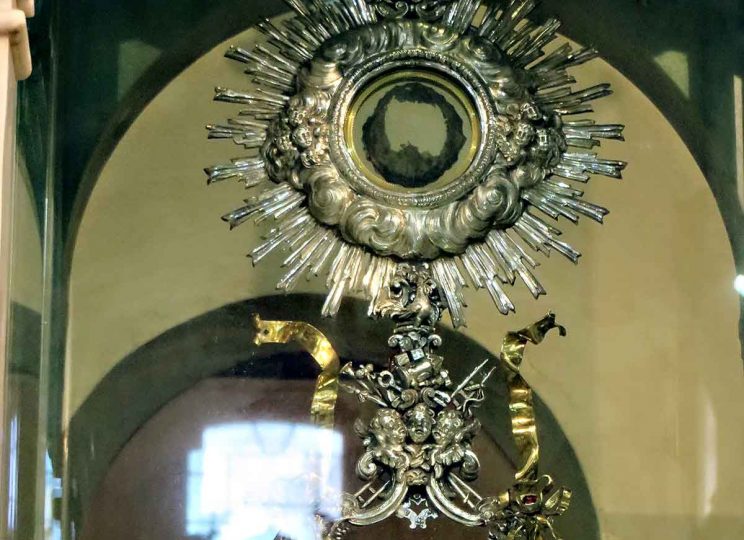 The Eucharistic miracle of Lanciano, Italy, from the 8th century. As in the miracle of Santarém, scientists have confirmed that the flesh and blood are indeed human. Like the bloodstains on the Shroud of Turin, the blood type is AB.

At those words, the congregants ran to the altar and began, with tears, to cry for mercy. They spread the news throughout the entire city.

Today, more than 1200 years later, the host remains intact—a sustained miracle. It is permanently exposed in the Basilian church of Lanciano.

The host of flesh, which is still in one piece and has retained the dimensions of the original “large host”, has a fibrous appearance and a brown colour.

The blood, contained in the chalice, has an earthly colour, and still consists of the five coagulated globules. Each of the parts is uneven in shape and size, and when weighed together, the total weight is equal to that of each piece.

Local Church and Vatican officials have authenticated the Eucharistic miracle on many occasions since the Middle Ages.

A rigorous scientific analysis was performed from 1970-71 by Dr Odorardo Linoli, a professor in anatomy and pathological histology and in chemistry and clinical microscopy, assisted by Dr Ruggero Bertelli, a professor emeritus of anatomy at the University of Siena.

The research done on the fragments of the blood and the flesh revealed that the blood of the Eucharistic miracle is real blood (type AB, most common in the Middle East) and the flesh is real human flesh (muscular tissue of the heart wall).

The proteins in the blood are in the same proportions as those found in normal fresh blood.

There is no trace whatsoever of any materials or agents used for preservation of flesh or blood.

Science, when called to testify, has confirmed what we have believed in faith and what the Catholic Church has taught for over 2000 years; echoing the words of Christ: “My flesh is real food; my blood real drink. Whoever eats my flesh and drinks my blood dwells continually in me and I dwell in him” (Jn 6:56-57).

The next Eucharistic miracle occurred in the German city of Augsburg in 1194.

A local woman who was rather too enthusiastically devoted to the Eucharist received Holy Communion. But without being noticed, she put the consecrated host in a handkerchief, took it home and placed the Eucharistic species in a container of wax inside a cupboard.

Five years had passed when on May 11, 1199 the woman, tormented by remorse, confessed the sacrilege to the superior of the local Holy Cross convent, Fr Berthold.

The priest told the woman to return with the host. When he opened up the wax covering, he saw that the Eucharist had been transformed into bleeding flesh.  The Host appeared “divided into two parts connected together by the thin threads of the bleeding flesh”.

The local bishop ordered that the Miraculous Host be exhibited in the cathedral, placed in a wax pyx (container) in a crystal monstrance, for public worship from Easter until the feast of St John the Baptist in June.

During this time a second miracle took place: the host was seen to swell in size until it cracked its wax casing and separated from it.

The miraculous host and the pieces of wax were then placed in a crystal container, which was returned to the church of the Holy Cross where it has been kept under glass in perfect condition for over 800 years.

Every year the feast of the Wonderful Miraculous Treasures is celebrated on May 11.

In the 13th century, in the village of Santarém, Portugal—just half an hour’s drive from Fatima—the Church’s second-most-famous Eucharistic miracle, after Lanciano, occurred.

The day was February 16, 1247, when a woman married to a philandering husband in her desperation turned to a sorceress to seek a solution to her problem.

The sorceress promised her a magical potion which would cure the husband of his adultery. Her payment: a consecrated host.

The desperate woman did as she was told, even at the price of committing a sacrilege. She went to Mass at the parish church of St Stephen, received Communion, and as she was leaving the church she removed the host from her mouth and tied it in a knot in the veil covering her head.

Suddenly the host began to bleed profusely. The blood flowed so heavily that people asked her about her injury. Frightened, she ran home and placed the host, still wrapped in the veil, in a wooden trunk.

That night, she and her husband suddenly saw a brilliant light emanating from the trunk, illuminating the entire house.

The alarmed couple called the parish priest. The pulsating host was then taken back in procession to St Stephen’s church.

To stop the host from bleeding it was sealed in a pyx of bees’ wax.

Nineteen years passed. In 1266 a canonical investigation discovered that a second miracle had occurred: the host had freed itself from the wax pyx and was now in a little crystal ampoule.

Over the many centuries since, saints and royalty have venerated the miraculous host of Santarém, which over time has become the object of national adoration. St Francis Xavier came on pilgrimage to Santarém before embarking on his great missionary journey in the East.

Miracles relating to the host were reported throughout the centuries. New emissions of blood were common. These stopped, however, after pilgrims in the late 1950s, especially North Americans, began to handle it abusively. By the 1970s half the glass of the ampoule had been broken off and the silver stopper removed, taken away as relics.

Today only particles of blood and solidified flesh are clinging to the inside of what remains of the glass ampoule, now kept in a monstrance atop the Eucharistic throne above the main altar of the church of the Holy Miracle, which was built in the 1500s on the site of St Stephen’s church.

The relics were scientifically analysed in 1997 for the 750th anniversary celebrations of the miracle and proven to be genuine and of a supernatural origin.

How a pope got involved

In 1263 a German priest, Peter of Prague, stopped at Bolsena in central Italy while on a pilgrimage to Rome. He is described as a pious priest, but one who found it difficult to believe that Christ was actually present in the consecrated host.

While celebrating Mass at the tomb of St Christina he had barely spoken the words of consecration when blood started to seep from the consecrated host and trickle over his hands onto the altar and the corporal (the altar cloth).

The puzzled priest first attempted to hide the blood, but then he interrupted the Mass and asked to be taken to the nearby city of Orvieto, where Pope Urban IV was then residing.

The pope listened to the priest’s account and absolved him. He then ordered an investigation.

When all the facts were ascertained, he instructed the local bishop to take the host and the stained linen cloth to Orvieto. Amid great pomp, he had the relics placed in the cathedral.

The linen corporal bearing the spots of blood is still exhibited in the cathedral of Orvieto.

In this article, I have focused on only four of the more than 100 recognised Eucharistic miracles. The reader may profit from finding out about others, such as the miracle of Siena (18th century), Tumaco in Colombia (1906), or Chirattakonam in India (2001).

The Eucharistic miracles, like all miracles, are gifts from God to witness to some truth or to testify to someone’s sanctity.

It should not surprise us that God has granted so many miracles to deepen our knowledge and love of his greatest gift to us, the gift of the Body and Blood of his only-begotten Son as the heavenly food of our earthly pilgrimage and the medicine of eternal life.

n Professor Michael Ogunu is the supreme chancellor of the Knights of St Mulumba in Nigeria, the provincial president of the Secular Carmelites in Nigeria and Ghana, and coordinator of the Fatima Apostolate in Africa.

The "new evangelisation" refers to sharing the Gospel of Jesus Christ to a people or culture that has forgotten its...