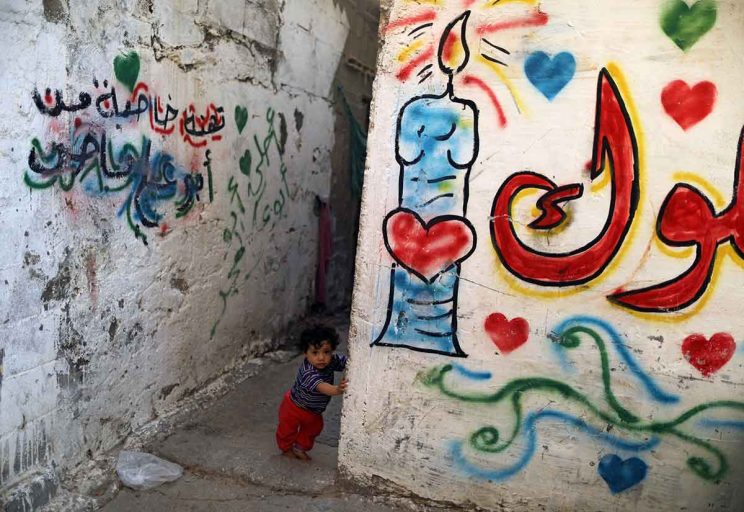 A Palestinian boy stands outside his house at a refugee camp in Gaza City, Gaza Strip. (CNS photo/Mohammed Salem, Reuters)

US columnist Tony Magliano gives us a background to the Israeli-Palestine conflict and the injustices that have been occurring for too many years.

Fifty years is a long time to endure forced suffering. Since the 1967 Arab-Israeli War — when Israel captured and occupied the Palestinian territories of East Jerusalem, the remaining part of the West Bank and Gaza — the Palestinian people have lived under the heavy yoke of Israeli military occupation.

According to Human Rights Watch’s Middle East Director Sarah Leah Whitson,  “Whether it’s a child imprisoned by a military court or shot unjustifiably, or a house demolished for lack of an elusive permit, or checkpoints where only settlers are allowed to pass, few Palestinians have escaped serious rights abuses during this 50-year occupation”.

There are Restrictions on Movement

Bishop William Shomali, auxiliary bishop of the Patriarchate of Jerusalem, told me that one of the most pressing problems facing Palestinians is the Israeli imposed restrictions on movement.

For example, he noted, Palestinians living in Bethlehem or Ramallah need to obtain a permit to go just 10km to Jerusalem. And permits are given only during principle feasts.

He said the ongoing illegal building of Israeli settlements on Palestinian land in the Occupied Palestinian Territories is an extremely serious roadblock to a peaceful solution.

According to Amnesty International “Swimming pools, well-watered lawns and large irrigated farms in Israeli settlements in the Occupied Palestinian Territories stand in stark contrast next to Palestinian villages whose inhabitants struggle to meet their essential domestic water needs. … In many places Palestinians receive water only one day per week or every few weeks, in some areas not for months at a time”.

Bishop Shomali told me that “Gaza is the worst case. It’s an open-air prison.” With the blockade, Israel completely controls who and what comes and goes in Gaza. 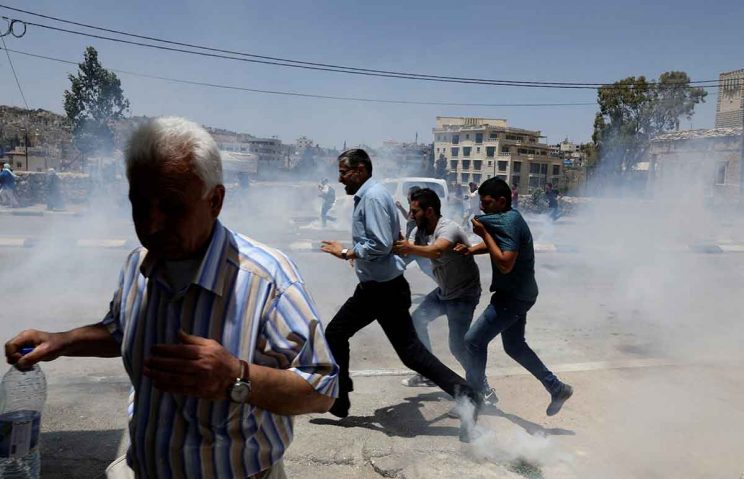 Palestinian protesters run for cover from tear gas fired by Israeli troops in clashes during a protest in the West Bank town of Bethlehem marking the 69th anniversary of their uprooting. Palestinians call the 1948 uprooting “nakba,” or catastrophe. (CNS photo/Ammar Awad, Reuters)

Negotiation the Only Way Forward

Bishop Shomali said that Hamas’ tunnel building in preparation for war against Israel and their numerous attacks against Israelis is also morally wrong. The many violent Israeli injustices against Palestinians, and Hamas’ violent attacks upon Israelis, is a vicious cycle that can only be broken with peace, he said.

To correct these injustices, Bishop Shomali said Israel needs to participate in good-faith negotiations towards the two-state solution: the establishment of an independent viable Palestinian nation coexisting peacefully with a fully recognised state of Israel.

He emphasised the two-state solution continues to be firmly supported by the Holy See.

And to immediately help ease the suffering of the Palestinians please give a generous donation to Catholic Near East Welfare Association .

Jessica Pollock-Kim, communications director of Churches for Middle East Peace, told me: “Beyond all the tangible impacts of ongoing occupation that I’ve witnessed in person and from a distance over almost 20 years is something equally, if not more damaging, the eroding of hope.”

To help restore the priceless gift of hope for our Palestinian brothers and sisters let’s take to heart the words of Pope Francis: “We must regain the conviction that we need one another, that we have a shared responsibility for others and the world, and that being good and decent are worth it.”