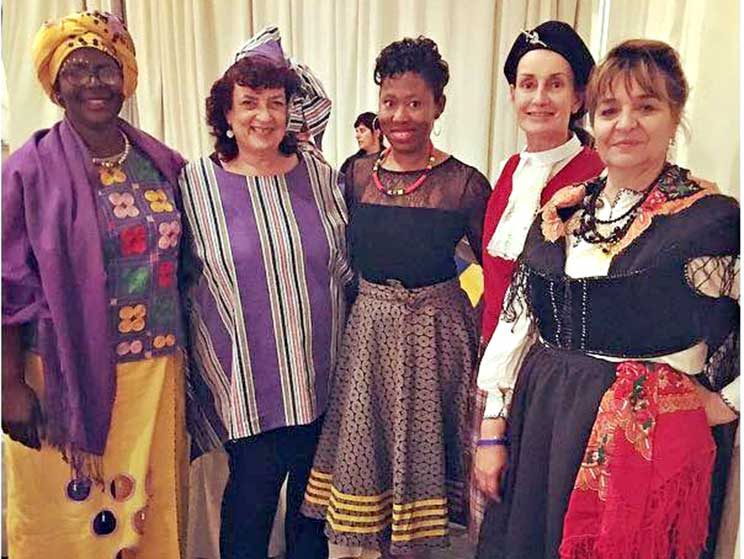 Members of the CWL dressed in cultural clothes for a themed dinner at the national conference in Pretoria. About 600 women attended.

Catholic Women’s League – A fellowship of Catholic women in Southern Africa and throughout the world, united through common faith and under the motto: Charity, Work and Loyalty

After three years in Pretoria, the national council of the Catholic Women’s League in Southern Africa will be based in Johannesburg after the election of Bernice Cocci as the new president.

Ms Cocci was elected at the 28th national conference of the CWL, and takes over from Veronica Malan-Lebona.

The conference was attended by close to 600 women from across the country, and included members from Swaziland and Namibia.

The Catholic Women’s League strives to be a sign of hope and love, of harmony and reconciliation, and an example of all socio-economic and cultural groups acting as one, the organisation said.

It also seeks to develop leadership qualities and enable its members to take an active role in the affairs of their communities.

As newly-elected president Ms Cocci presented the CWL’s theme for the next three years: “Whom shall I send?” “Thuma mina” (“Send me”) (Isaiah 6:8).

She said the objective for the next three years is to obtain positive results from the resolutions and recommendations carried at the Pretoria conference.

“One of the important tasks we, as the national team, will do is to visit the Catholic Women’s League branches in their parishes.

“There, we will experience firsthand just some of the amazing work carried out by our members,” she said.

“Yes, we are not only the ‘tea and cake ladies’ serving at many parish functions,” Ms Cocci said.

The Catholic Women’s League is represented in 24 dioceses in Southern Africa, with membership at about 5000.

Pope Discusses Deaconesses, Need for Nuns to be Servants not ‘Maids’
Share

More in Church, lay ministry, Women and the Church

Tavern owners from Khuma, Kanana, Tigane, and Jouberton in Klerksdorp diocese mobilised their patrons, and attended an event as part...