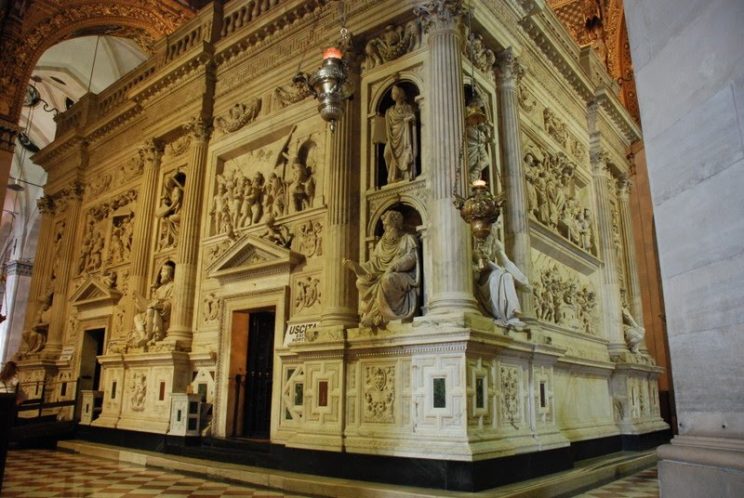 I belong to the Legion of Mary. Our group is named after Our Lady of Loreto. Please explain where this name comes from. I am interested, and no one here seems to know.

Loreto is a town in Italy. According to an old legend, the Holy Family’s house, which had been carefully preserved in Nazareth, was under threat from invaders, so in the 13th century, angels took it from there to Loreto in order to keep it intact and safe.

In the middle ages it became an obvious place for people to gather and pray. Not surprisingly, it was soon also accepted as the house in which Mary was born and where the angel told her she was to become the mother of the Messiah. Eventually, devotion grew to honour Our Lady of Loreto, and the house became a site of great pilgrimages. Saints and popes over the years since have approved and commended, what is really a very small cottage, as a specially holy shrine by visiting it or unquestioningly acknowledging its existence as the result of a miraculous event.

Wonderful cures are alleged to have happened there, and the fact that the cottage has stood firmly without any apparent foundations for such a long period, have given a boost to the faithful’s devotion to it as the true home of Jesus, Mary and Joseph.

Basilica Built Around the House

A basilica was eventually built to incorporate the cottage, and the whole complex remains a destination for many pilgrims and tourists in Italy.

You probably already know the Litany of Loreto, also called the Litany of Our Lady. This has been associated with the shrine of Loreto for many centuries, although it is not certain that it had its origins there. All the same, pilgrims to the shrine took the litany back to their home towns and it soon spread throughout the Church.

Like the famous Shroud of Turin, the authenticity of the legend has been scrutinised by experts, and there are understandable doubts about the story of a house carried by angels.

Yet Loreto has the reputation of being favoured by the Church as particularly closely associated with the Mother of God. Whatever the facts may be behind the legend of the flying house, your Legion of Mary group should feel delighted by being given the title of Our Lady of Loreto.

The Sisters of Loreto founded by Mary Ward, take their name from the shrine where Ward used to pray. She founded the Institute of the Blessed Virgin Mary, the first order of unenclosed nuns and sisters in the congregation have IBVM behind their names

During a healing service at a parish in a South African diocese, the deacon invited and anointed those present with...