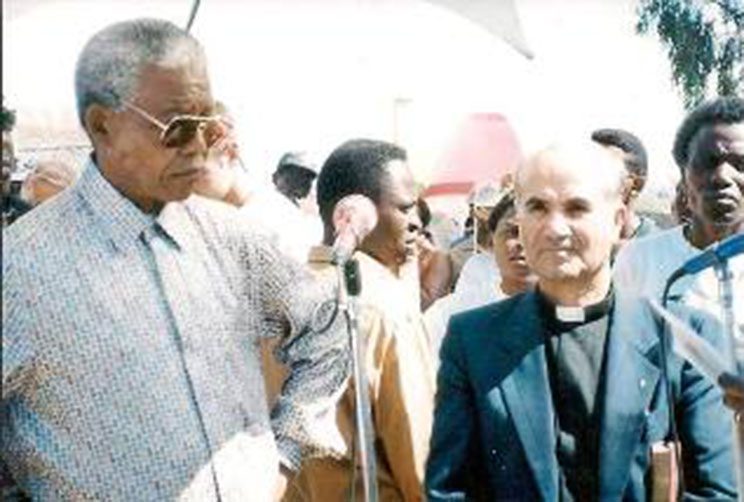 Fr Michael D’Annucci, an influential Italian Stigmatine missionary in Pretoria archdiocese who was murdered in 2001, is seen with Nelson Mandela. Fr D’Annucci was a model of the modern missionary in South Africa.

The Italian priest known as Masusumetsa “was a great friend of South Africa, and its people”. These were the words of Nelson Mandela, in remembrance of Fr Michael D’Annucci after the priest’s violent death.

On a wet December morning in 2001, Fr D’Annucci had just paid a visit to a family in Block DD in Soshanguve, north of Pretoria, when he was accosted by two armed car hijackers in the family driveway.

Murdered by Criminals in Pretoria

The criminals shot the priest in the foot and hand when he refused to hand over his car keys. When Fr D’Annucci called for help, they shot him at point-blank range. They left him to bleed to death in the street as they made off with his car, cellphone, Bible and other possessions.

As they shot down the priest, the three armed robbers — all of them would be caught and sentenced to life in jail — did not know that their act would change the face of the Catholic community, in the Pretoria region and beyond.

Over the span of three decades in which he personified and spread the spirit of “Community serving Humanity”, Fr D’Annucci was a worthy leader who led with utmost diligence, energy and candid prudence.

This  legacy remains etched deep in the memory of those whose lives he touched, and those the Stigmatine Father so self-effacingly served.

Michele D’Annucci was born on September 17, 1941, in the province of Potenza in southern Italy. The second-born child of Giovanni and Calandriello D’Annucci, he was raised in a family firmly rooted in human and Christian values.

In 1960 he entered the religious family and joined the Stigmatine Fathers in Verona, Italy. In 1961 he made the novitiate and, four years later, in 1964, he made his perpetual vows.

Making of a missionary

In 1967, at the age of 26 he answered his call to serve humanity in the downtrodden regions of the world, and came to South Africa. He completed his theological studies in South Africa, at the St John Vianney Seminary in Pretoria, and was ordained a priest on June 22, 1969 at the Most Holy Redeemer church in Mmakau village, northwest of Pretoria.

Upon his arrival in South Africa, Fr D’Annucci had taken particular cognisance of the untold hardships inflicted by the apartheid system on the African majority. Encouraged by the Church’s teachings on social justice, and his deep belief in the goodness of all people, he became an active advocate of religious revival and social justice for the disenfranchised section of South African society.

To this effect, he initiated and played a major role in the beginning of social responses to the wrath that apartheid wrought on the disenfranchised. This earned him many arrests and repeated stints of jail time — at times in solitary confinement — at the hands of both the South African Police and the homeland Bophuthatswana police.

A Belief in Education

D’Annucci held a firm and steadfast belief in education as a tool to liberation. It was at the opening of Tsogo High School in 1975 that he declared to the school’s new students: “Your task and duty is to fight apartheid and social injustice from the school desk, for a future free, and post-apartheid South Africa.”

His commitment to social justice and empowerment found expression in the various initiatives which he pioneered and implemented. Among these are:

Through his friendship with Mother Teresa of Kolkata, he presided over the settlement of her Sisters of Charity in South Africa in 1988.

Beyond the key roles he played in the implementation of these social services, Fr D’Annucci  was deeply passionate about the advancement of lay participation in Church activities.

Among the programmes which he was highly involved with and played a crucial role in their implementation and execution were Wedding and Family Preparations, the Chiro Youth Movement and the formation of Small Christian Communities.

A mark of Fr D’Annucci’s genius was his ability to collaborate with various stakeholders in bringing to fruition a particular goal. Being the hands-on man that he was, he would go over the plans for a particular project, and immediately get stuck in, helping with his own bare hands. It always came in handy whenever his abilities as a trained electrician and plumber were needed.

Fr D’Annucci’s violent death left many stunned and without words to express their pain. His untimely passing left many feeling lost.

His was an extraordinary life, and Fr D’Annucci’s remarkable contribution as a champion of charity has not been forgotten.

The posthumous honours came soon. On March 24, 2002, Italy’s President Carlo Azeglio conferred the Gold Medal for Civil Value on him.

On September 22, 2002, Fr D’Annucci was officially declared a martyr of the Catholic Church, and his name was included in official martyrology documents in Rome.

His death, however, was not all in vain. It is not evil which has won. Evil has not defeated his mission.

Fr D’Annucci is victorious and captures the palm of martyrdom. And the blood of the martyrs will be the seed of new Christians.

Daluxolo Moloantoa is the content manager for the Scalabrini Institute for Human Mobility in Africa. He is planning a book to celebrate Fr D’Annucci’s legacy. If anyone has any information that may be of use, please contact him on 081 063 1242.

Memorial Mass to be held for Fr Ted Rogers SJ

The Amazon Basin: Mission in the Middle of Nowhere
Share