Vestments: The Layers of Cloth on a Priest at Mass

I have noticed when attending Holy Mass in a Catholic church, some priests wear the stole on top of the chasuble instead of under, which I think has been the tradition. Is there a special symbolism here or can the stole now be worn either way? David Bray 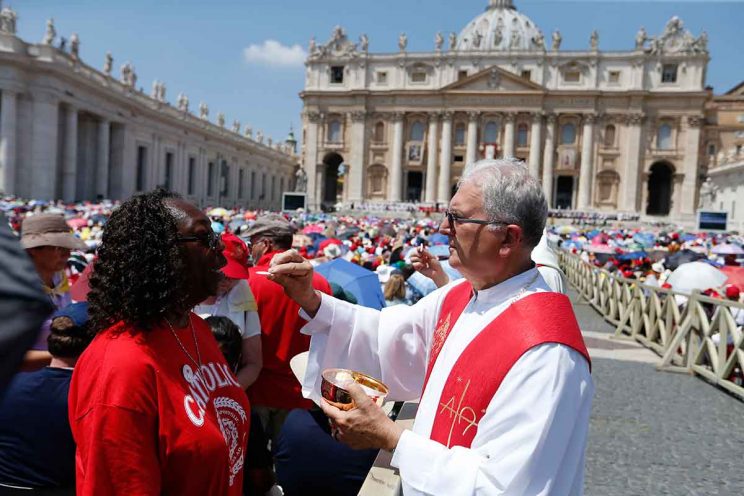 A priest distributes Communion as Pope Francis celebrates Mass marking the feast of Pentecost in St. Peter’s Square at the Vatican. In attendance were thousands of people celebrating the 50th anniversary of the Catholic charismatic renewal. (CNS photo/Paul Haring)

The citizens of ancient Rome were accustomed to wearing a white towel-like cloth around their necks or over the shoulder. Known as a sudarium, its purpose was to wipe away the perspiration that bothered them, especially in the extreme heat of a Roman summer.

Magistrates and important officials, as can be imagined, wore somewhat grander and decorated versions of the sudarium, and these apparently became part of their badge of office.

Although there are many explanations of how the Christian clergy appropriated the garment and turned it into the liturgical vestment now known as the stole, the fact is that the stole became the ceremonial vestment worn exclusively by ordained bishops, priests and deacons. It signified the wearer’s authority.

The priest’s formal attire when celebrating the Eucharist has traditionally been the amice placed over the shoulders, followed by the alb, the cincture, the stole and the chasuble.

The chasuble began as an everyday protective outer garment, a kind of big poncho or cloak with a hole near the centre for the head. It was originally called a paenula. St Paul mentions it in 2 Tim 3:14.

The chasuble is the essentially priestly liturgical vestment. It symbolises the virtue of charity, which the priest must exercise as Christ’s minister. Charity or Christ-like love cloaks all, even the priest’s authority, and so the chasuble should not have any other robe on top of it. (The exception is the pallium worn only by archbishops, indicating their union with the bishop of Rome.)

Ancient depictions of bishops and priests, such as are seen in mosaics and other works of art, do not show the stole being worn over the chasuble. Because the chasuble is an outer garment, this indicates the constant tradition, as you suggest.

The General Instruction of the Roman Missal lays down that it is the norm for the chasuble to be worn over the alb and stole (337).

At one stage, a number of years ago, there was an effort to produce a chasuble with an external stole attached, but the fashion never took on. There was also the chalb, a type of alb combined with a chasuble, over which the stole was worn. Again, this never received general acceptance or approval.