Sermon on the Screen: Priest plays himself in ‘Lady Bird’ 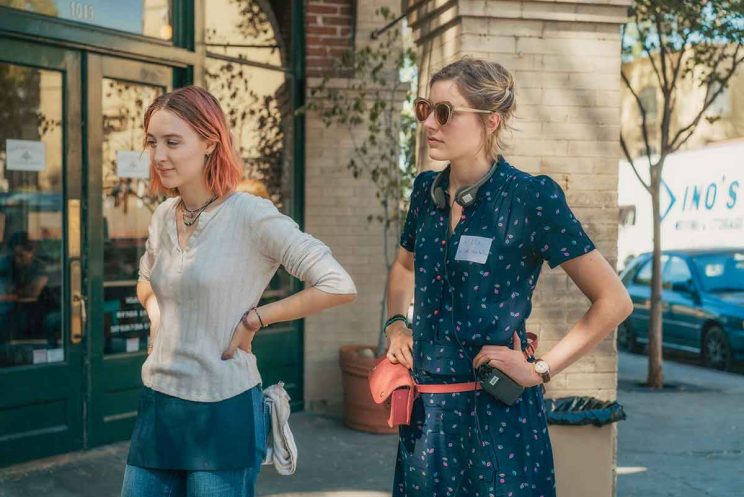 Saoirse Ronan and Greta Gerwig star in a scene from the movie “Lady Bird.”

Part of a voice-over in the trailer for “Lady Bird” – playing over scenes from the movie and in between dialogue – comes from a homily delivered to Catholic high school students attending a school Mass in the beginning of the movie.

Not all of the sermon, even what was shown in the trailer, made it to the final cut of the coming-of-age movie, but that’s OK with Claretian Father Paul Keller, who spoke these words.

“Making connections, that’s what preachers do,” he told Catholic News Service in a phone interview while he was at the airport in Ottawa, Ontario, awaiting a flight to Los Angeles.

The priest looks natural addressing the movie’s students in the congregation because he really is. He has celebrated Masses before at the church, St. Elizabeth of Hungary in Altadena, California. It’s a real church – not a Hollywood set.

Moviegoers won’t be trying to remember what other movies they have seen the priest in as they might do for the two actors portraying priests in the movie, directing school plays with students from the fictional all-girls Immaculate Heart School, where the main character, Christine “Lady Bird” McPherson (Saoirse Ronan) attends, and the neighbouring Jesuit high school.

In the movie credits, Father Paul Keller is listed as playing Father Paul Keller, a priest who is never actually named in the movie because his role is celebrating four Masses, shown in quick cuts during the movie’s school year. The Internet Movie Database page for “Lady Bird” describes him as “a priest in real life.”

It is precisely as a priest in real life – residing at San Gabriel Mission, not far from the church used in the movie – that Father Keller got his role. The parish priests weren’t available for the shoot, so they asked nearby priests who have helped out at the parish if they could do it.

Father Keller, originally from Iowa, was recently named provincial prefect of spirituality for the Claretian Missionary Fathers, which in his words means he’s in charge of morale and that he travels a lot. His schedule also is flexible, so he was free for what turned out to be a 12-hour day on the movie set. His new role in the order’s province also meant he just cut short his time ministering in Tanzania to five months instead of five years.

For the movie, the priest gave four homilies and a small portion of one was used in the film, but he also led the “congregation” of actors in prayer and distributed ashes for an Ash Wednesday service that made the cut.

He explained to the cast how they should do certain things at a Mass, such as hold their hands for Communion and make the sign of the cross. His day on the set started with his homilies, all culled from previous ones he had given, especially from his six years working at a Catholic high school.

He addressed the actors and extras, who were wearing Catholic school uniforms, as if they were truly getting this homily since this wasn’t a script. For the first homily, for the movie’s Mass at the start of the school year, he spoke for 12 minutes instead of his usual 10 for homilies. When he was done, the congregation stood up as if to say the Nicene Creed and someone on set yelled: “Cut!”

“It was deadly silent for two beats and then there was applause,” the priest said. The movie’s writer and director, Greta Gerwig, came running up to him with tears in her eyes and told him, “That was so perfect.”

It turns out, he said, his sermon’s message about fear and love and how most people are motivated by one or the other in the choices they make was essentially a summary of the movie.

Gerwig met Father Keller at San Gabriel Mission prior to the movie shoot and told him she had some things sketched out for homilies but that he could say what he wanted.

“I was preaching right at them,” the priest told CNS. He took his role seriously, saying he likes working with people who don’t go to church, citing, but not comparing this to, his prison ministry.

The Claretian charism is missionary evangelisation, he said, which makes him pretty much comfortable speaking anywhere.

His takeaway from the long day, that he was paid for, was “how ridiculously hard they work” and how nice everyone was. The next day he texted Gerwig telling her how much he enjoyed it and she promised he would get another role sometime.

Father Keller said “Lady Bird’s” characters are not always moral, but they are human, not caricatures.

A Compliment to Catholic Schools

Father Keller said the movie is filled with characters that he wanted to know more about and that it was a compliment to Catholic schools, which both Gerwig and Ronan attended. Gerwig, who is not Catholic, but seems to get Catholicism, told America magazine: “There’s plenty of stuff to make a joke out of (in Catholic schools), but what if you didn’t? What if you took it seriously and showed all the things that were beautiful about it?”

On the set, during breaks and lunch, some of the actors came up to Father Keller to thank him, talk about their faith or ask questions.

The next day he went back to being a priest in real life, but when “Lady Bird” was being shown in film festivals before its public release he was paying attention. His brother talked him into going to the Telluride Film Festival where it was being shown in Telluride, Colorado, over Labour Day weekend.

The priest drove there from Los Angeles only because he could stay halfway at a Claretian parish. He stood in line for the movie, counting how many people were in front of him and not sure if he would get in, when he heard someone say, “Father Paul!”

It was Gerwig, who then escorted him into the show where he sat with her mom. Gerwig’s mother wanted to be sure the priest knew the movie was not a documentary, noting the character’s mother gives her daughter the silent treatment, something she said she wouldn’t do.

Taking this all in, months later, the priest said it all almost seems like an accident to him.

“I could’ve been in a direct-to-DVD cartoon talking to turtles,” he said, noting how he got to take part in a movie that is already getting award buzz. By Carol Zimmermann Catholic News Service