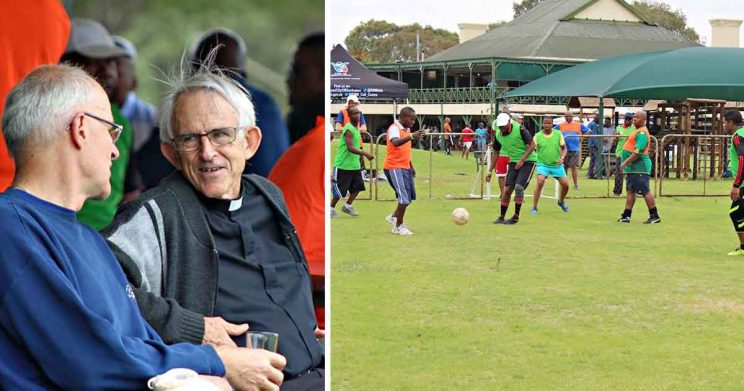 Priests from across the country attended the Radio Veritas and Veritas Warriors’ Shepherds on the Green day. Older priests got chatting and younger priests headed to the soccer field.

Following the inaugural event in 2016, the Radio Veritas Warriors, together with Radio Veritas, hosted the second annual “Shepherds on the Green” for priests from around the country.

Shepherds on the Green aims to give priests a day of rest, activity and fun. It takes them away from their daily work and toil to enjoy a day of sport, indoor games, simple entertainment — and each other’s company.

The Benoni Country Club in Ekurhuleni on the East Rand near Johannesburg played host to priests from around the country.

The special day started out with a nutritious five-star breakfast, followed by different sports and activities.

The priests were able to participate in soccer games, cycling, golf, tennis, bowls, squash and a variety of board games, or they could take to the country club’s scenic trail for cycling, walking and/or running.

Following the activity-packed day, the priests freshened up to get ready for the gala dinner. They were treated to a three-course meal with entertainment, and they were also thanked for their service to the community.

“We were thrilled to have Priests from many diocese such as Eshowe, Pretoria, Kimberley, Rustenburg, Witbank and Mariannhill , all gather together for this wonderful social day,” he said.

The event was organised to show priests the appreciation that they so often do not get for the work they do for the Church as well as their local communities.

The Veritas Warriors is a group of Catholic men who have volunteered their time to help Radio Veritas reach out to and evangelise men.

50 Years a Priest: A ‘Blunt Instrument’ Thanks God

One of South Africa’s most popular priests is celebrating 50 years of priesthood on December 8. ERIN CARELSE spoke to...