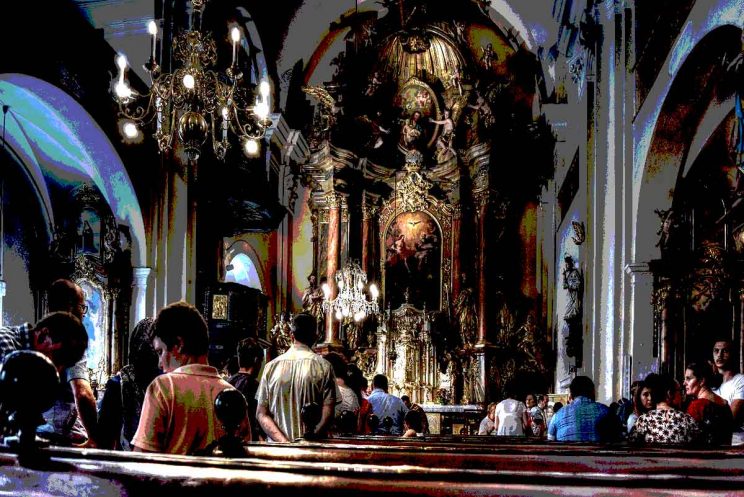 Can’t Just Leave it to the Bishops

The Christian contribution to politics often seems to come only from “the declarations of the bishops” and not from Catholic lay men and women who are called to bring the Gospel to their activities in public life, the pope said in a video message to Catholic politicians attending a three-day conference in Bogota, Colombia.

“It is necessary that Catholic laypeople do not remain indifferent to the public nor withdrawn into the churches nor await ecclesiastical directives and instructions to fight for justice, for more humane ways of life for all,” Pope Francis said.

The “meeting of Catholics who assume political responsibilities at the service of Latin American people” was sponsored by the Pontifical Commission for Latin America and the Latin America bishops’ council, CELAM.

In his message, the pope said politicians are called always to seek the common good, setting aside their personal ambitions and influence from special interests.

Politics is “the highest form of charity,” he said. It is a service that does not try “to lord over all the dimensions of people’s lives,” which actually leads to “forms of autocracy and totalitarianism.”

Catholics in public service are called to follow Jesus who “came to serve and not be served” and give their lives “like ‘martyrs’ for the cause of the common good of their nations,” Pope Francis said.

Rehabilitate the Dignity of Politics

However, Catholic politicians must also work to “rehabilitate the dignity of politics,” particularly in Latin America, where “the crisis of political parties and the absence of political debates” stifles the advance of policies that can improve people’s lives.

“That is why people look from afar and criticise politicians and view them as a group of professionals who have their own interests or angrily denounce them – at times without the necessary distinctions – as tinged with corruption,” the pope said.

Latin America, he continued, needs “good and noble politics” that “safeguard the gift of life in all its stages and manifestations” while promoting industrial, technological and sustainable growth to confront the tragedy of poverty.

Equality and inclusion are also important because “leaving so many helpless and continuing to feed a scandalous social inequality is not true development.”

“We must move toward mature, participatory democracies, free of the scourges of corruption or of ideological colonisation, or autocratic pretensions and cheap demagogues,” the pope said.

Pope Francis said that despite Latin America’s deep Catholic roots and traditions, Catholics often “seem irrelevant in the political scene and even assimilated to worldly logic.”

Not Judge Conscience But Actions

“There are many who profess to be Catholic – and we are not allowed to judge their consciences, but their actions – who many times reveal a lack of coherence with ethical and religious convictions of the Catholic magisterium,” he said.

Instead, lay men and women must live out their faith in their social and political lives while bishops and priests are called to guide and nourish their spiritual well-being through the sacraments, not by direct influence.

“As pastors, united with our people, it would do well to ask ourselves how are we stimulating and promoting charity and brotherhood, the desire for good and of truth and justice; what we do so that corruption does not nestle in our hearts,” he said. By Junno Arocho Esteves Catholic News Service