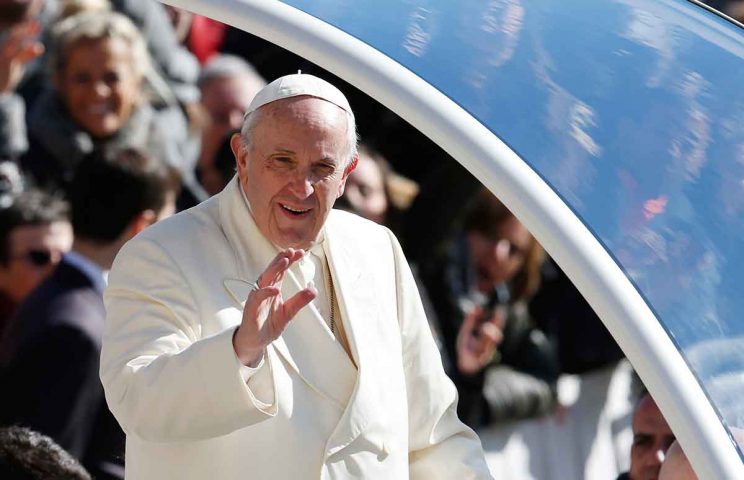 Pope Francis greets the crowd during his general audience in St. Peter’s Square at the Vatican. At the audience the pope confirmed that he will visit Ireland Aug. 25-26 for the final days of the World Meeting of Families. (CNS photo/Paul Haring)

Despite the chill and gusts of wind in St. Peter’s Square, Pope Francis welcomed the beginning of spring with an impromptu lesson about gardening and how to grow into being better Christians.

Christians can learn from what makes spring flowers flourish, the pope said, because for Christians, their root is Jesus and the water that replenishes those roots are the sacraments and prayer, which makes lives bloom with Christian virtues and good works.

“I wish that this spring would be for you a spring in bloom” and an Easter that blossoms, he said. Offering a saying that is well-known in Argentina, the pope said, “‘The flowers a tree puts forth come from what it has underneath.’ Never cut off (one’s) roots with Jesus.”

The Rite of Holy Communion

In his main talk, the pope continued his series on the Mass, focusing on the rite of holy Communion.

This rite is a continuation of Jesus’ offer at the Last Supper, where he said, “Whoever eats my flesh and drinks my blood remains in me and I in him,” the pope said. The priest or deacon distributes to the faithful “the bread of life and the chalice of salvation” in Jesus, he said.

After the celebrant breaks the consecrated bread, the people reflect on the words spoken at the altar, proclaiming Jesus as “the Lamb of God who takes away the sin of the world,” he said.
This moment is an invitation, “calling us to experience the intimate union with Christ, source of joy and holiness,” the pope said. It is also an invitation to an “examination of conscience, enlightened by the faith,” he said.

On the one hand, “we see the distance that separates us from the holiness of Christ; on the other, we believe that his blood was shed to take away the sins,” he said.
Just as baptism washes away sin, he said, “we are all forgiven or will be forgiven each time we approach the sacrament of reconciliation.”

It Us Who Tire of Asking for Forgiveness

“Do not forget! Jesus always forgives. Jesus never tires of forgiving. It is we who tire of asking for forgiveness,” he added.

When St. Ambrose wrote, “I, who sin continually, must always have a remedy,” he was reflecting on the salvific power of the blood shed by Christ, the pope said.

The same faith is at work, he said, when the assembly looks to the Lamb of God, who takes away the sin of the world, and beseeches, “Lord, I am not worthy that you should enter under my roof, but only say the word and my soul will be healed.”

When the people process toward the altar to receive Communion, the pope said, “in reality, it is Christ who comes toward us to assimilate us in him.”

Receiving the Eucharist means letting oneself be transformed by what is received, he said.

“Every time we take Communion, we resemble Jesus more,” increasingly being transformed in Jesus and stripping away one’s selfishness by uniting oneself closer with Christ, he said.
Just as the bread and wine are turned into the real body and blood of Christ, he said, so too are those who receive the gifts, transformed into “a living Eucharist,” becoming “body of Christ.”
“We become what we receive,” he said.

The pope said receiving Communion can be done standing “with devotion” or kneeling, whichever has been determined by each bishops’ conference, and Communion can be received on the tongue or, where it is permitted, in the hand.

He encouraged people to use the time after receiving Communion to pray more deeply, silently speaking with Jesus from the heart.
“The Eucharist makes us strong, to give us fruit, flowers of good works,” he said. Receiving the Eucharist is receiving Jesus, who “is so good and so great,” he transforms people. By Carol Glatz Catholic News Service