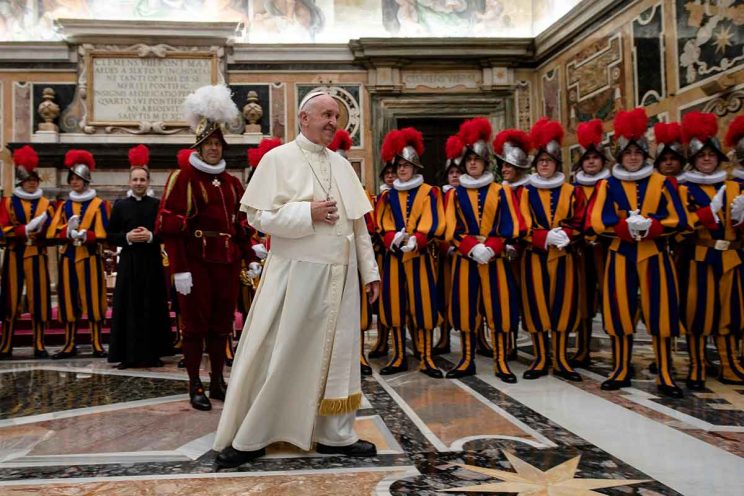 Pope Francis is pictured during an audience with Swiss Guard recruits and their family members in the Apostolic Palace at the Vatican. The audience was held two days in advance of the annual swearing-in of new guards. (CNS photo/Vatican Media)

The steadfast faith and love for the Catholic Church that have characterised members of the Swiss Guard for centuries must be part of the men’s lives even after they have stopped wearing their colorful medieval uniforms and carrying their halberds, Pope Francis said.

Welcoming 33 young Catholic men from Switzerland who were to be sworn in as Swiss Guards, Pope Francis told them, “A Swiss Guard is a Swiss Guard when he is on duty and when he’s not.”
New recruits are sworn in every May, commemorating the date in 1527 when 147 Swiss soldiers died defending the pope during an attack on Rome.

“Remembering that historic gesture is a constant call to keep in mind and to live the typical qualities of the corps,” the pope said, listing them as: “living the Catholic faith coherently; persevering in friendship with Jesus and in love for the church; being joyful and diligent in important as well as small and humble daily tasks; courage and patience, generosity and solidarity with all.”

“These are the virtues you are called to exercise when you carry out your service of honor and security in the Vatican, as well as when you have handed in your uniform,” the pope told them.
Pope Francis said it is wonderful to watch how young men in the Swiss Guard pay attention to others and show such care and concern toward visitors and pilgrims, especially those most in need.
“It’s not always easy to have this attitude,” the pope said, “but with the help of the Lord, it’s possible.”

The pope encouraged the new recruits to pray on their own, participate in the Swiss Guards’ community prayer, read the Bible and attend Mass regularly – all of which are part of “the secret of the effectiveness of your work here in the Vatican.” By Cindy Wooden Catholic News Service