Homily for a Church That Has Sinned 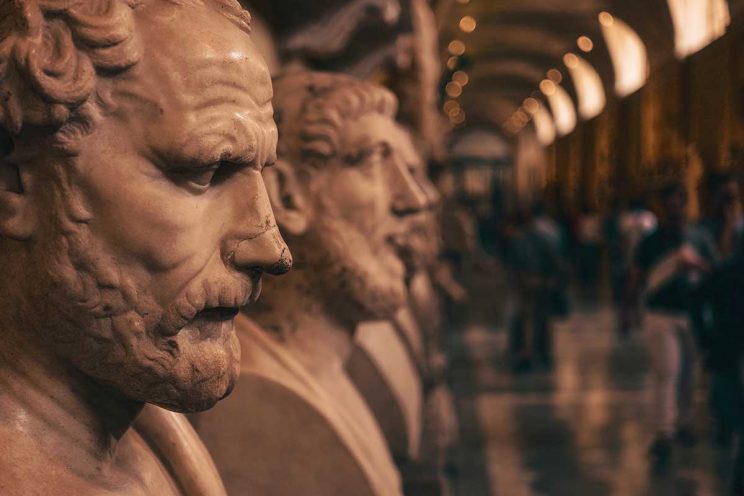 By Father Lou Meiman  – In the third century, under the Roman emperor Diocletian, Christianity suffered the worst persecution in history throughout the empire for years. But the governor of the Roman province of Africa allowed the large number of Christians in North Africa some leniency.

If the leaders would just make the token gesture of handing over the sacred Scriptures to the authorities, they would not be prosecuted. Many did and saved their own lives. Many others would not and were executed. Those who did became known as “traditores,” literally those who had handed over. The word comes down to us as “traitors.”

Not too long after, the emperor Constantine proclaimed freedom of religion throughout the empire. But Christians still had to deal with the traitors in their midst. The ones who had handed over that which was most sacred, and yet still held positions of power and authority. To echo the words of the people in today’s Gospel, how could these men give us the flesh of Jesus Christ in the Eucharist?

And the question was not simply how dare they, but literally, could they? Could those who had committed such a deep betrayal still enact the sacraments at all? The church had to deal with the anger and the betrayal and the abandonment of those who held the highest positions of trust.

Its Not the First Time

Thanks to this week’s grand jury report from the commonwealth of Pennsylvania, many of us know what it is to come together as a church that is angry and betrayed by those in power. Again we hear the tales of horrible abuse, of predators and those who shielded them.

Over 1,000 victims, more than 300 priests over the last seven decades. And while most of the perpetrators are dead, and the report acknowledges that there has been change, the reality is still the reality. Those in power have once again handed over that which is most holy, this time the lives of our children and young people.

For this is not the first time we have come together like this. Many of us remember when it was our own archdiocese that was in the headlines across the country, when the news was the abuse in our own churches and our own schools. And I remember at the time that authorities in the Vatican made no secret that they thought it was an American problem – the result of Americans’ lax morality. That it was perpetrated by a few individuals whose guilt was horrible, but limited.

The intervening years have proven how wrong they were.

And so we come to this summer. And the story out of Pennsylvania is not the only one. Every bishop in the country of Chile submitted their resignations last month over the widespread abuse in their country.

The country of Australia, after a long nationwide investigation, has convicted and jailed the former president of the bishops’ conference, and Cardinal George Pell is on trial there now.

Decades of abuse of religious women in India at the hands of priests and bishops has come to light. The archbishop of Boston just this week cancelled his appearance at the World Meeting of Families in Ireland, to begin an investigation into Boston’s two seminaries, where there are charges of ongoing abuse of adult seminarians by the faculties. And Cardinal Theodore McCarrick, once the senior prelate in the United States, was stripped of his title and ordered by the pope to spend the rest of his life in penance for abusing both children and adult seminarians and priests.

System Problem – One Which Has A Life of its Own

And so we, as an entire church, must beg the forgiveness of those victims. All of those victims. We must do whatever we can and whatever it takes to bring them what healing is possible. But we owe them much more than that. We must face the reality that this is a result of the culture and system that we as a church have built. Only then can we begin the change that must come.

And so I find some irony and some blessing in the Scriptures the church places before us this day.

Back in the days when the church struggled with the betrayal of those who were God’s ministers, a great cathedral was built in the capital of the Roman Empire. For 1,500 years it would stand as the largest church in the world. Until a chapel on the Vatican Hill was rebuilt by Michelangelo and the pope and became the largest church. That original cathedral still stands in Istanbul, which was Constantinople. And it still bears the name under which it was dedicated: Hagia Sophia – The Holy Wisdom. It is a name which is a direct reference to the passage from Proverbs we read today.

“Wisdom has built  HER house,

she has set up HER seven columns;

SHE has spread HER table.

SHE calls: Come, eat of my food, and drink of the wine I have mixed!” – Proverbs 9

A Roman Concept of Women

It is the image of the banquet of the reign of God presided over by a woman. For three-quarters of Christianity’s history, its largest church bore the title of God as female.

And yet, ironically, it was the ancient Roman concept of the place of women that prevailed in Christianity. Greek women could hold property, own and operate businesses. Roman women could only act through male relatives, only be seen in public with hair and limbs covered.

Recent popes have said that there is nothing in church law or custom to prevent women from holding positions of power in the church. Good.

For it is far beyond time.

Not just for the church to listen to the voice of women, but for women to sit in judgement. For women to help shape the future.

God Will Never Abandon You

So that is for tomorrow. But what of today? Now? What of our anger and betrayal?

But I will not abandon you. Not ever. For my flesh is real food. And my blood is real drink. I will feed you with life and love. For no human. And no human sin – none – can ever stop my love for you.

And so we come once again to this table.

For in the end it is the Holy Wisdom of God that has built this house.

And She has set up her columns.

And She has spread her banquet.

And She will feed us with the bread of life.

She will feed us, for the way is long ahead of us.

And it is hard.

But we know where it leads.

For Wisdom has promised to go ahead of us. To meet us in her house, at the Great Banquet in the reign of God.

“Homily for a church that has sinned” from the issue of The Record, newspaper of the Archdiocese of Louisville, Kentucky. It was written by Father Lou Meiman, pastor of St. Frances of Rome Church and St. Leonard Church in Louisville. By Catholic News Service