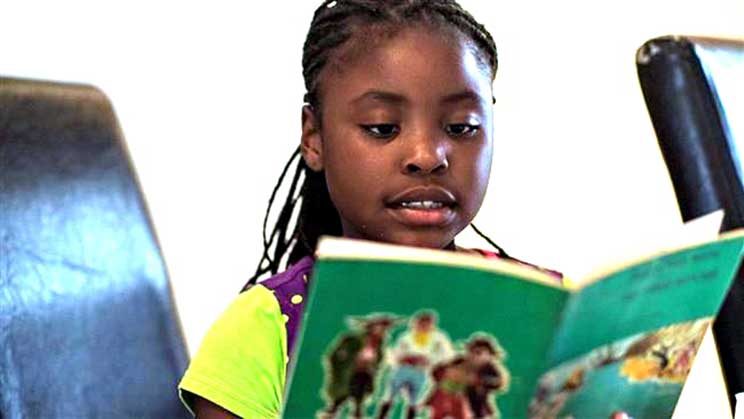 By Daluxolo Moloantoa – The closest connection that the Catholic Church has to a famous child writer may be that of Miep Gies, the Dutch Catholic woman who hid Anne Frank and her family from Nazi invaders during World War II. This may be about to change.

Enter Michelle Nkamankeng. The nine year-old pupil at Johannesburg’s Sacred Heart College emerged on the literary scene a couple of years ago with her book Waiting for the Waves. She became the youngest published author in South Africa, and in Africa, also making it into the world’s top 10 list of youngest writers.

Michelle has now published her second book, The Girl Who Believed in Herself.

Her books are written for other children, and are meant to help spread literacy, especially to disadvantaged children.

“When I close my eyes at eight o’clock at night, I see myself coming in, holding a book and teaching them to read. After that, they can read, write and spell so well that they win scholarships,” Michelle said.

Michelle, who was born in South Africa but whose parents are originally from Cameroon, said she was inspired to write Waiting for the Waves, her first book, after a visit to the seaside with her father, Paul Nkamankeng. What also motivated her to write is that she discovered that most children’s books were written by adults — and she wanted to change this.

Her latest publication is the second in a series of four books which she has already written.

Her mother Laurentine Nkamankeng, had to get creative to ensure that her daughter’s work would see the light of day. She learnt the book publishing process, and established a book publishing company, LANSM Publishing Ltd, which she hopes will nurture and expose other child writers in South Africa, and across the continent.

He writes in the foreword: “Here is the future — young, bright and committed. Michelle writes her own stories with beautiful illustrations for consumption by the next generation of readers and writers.”

Michelle said she would like to see her books introduced into the Catholic schools’ curriculum for children to learn from them.

“I would like my fellow Catholic learners to see that they were born to do something in this world, and to follow their dreams, encouraged by their families,” she said.

Apart from her writing, she is also involved in projects under her own foundation, the Michelle Nkamankeng Foundation.

The foundation’s sole objective is to motivate and inspire children from the previously disadvantaged community to follow their dreams and talents, and to empower them, especially through literacy.

What is Michelle’s message to other young people with hopes and dreams of being published authors?

“Your dreams will fuel your actions. If you never stop dreaming, you will always reach your destined hopes. Know your purpose, fulfill it and never ever give up,” she said.