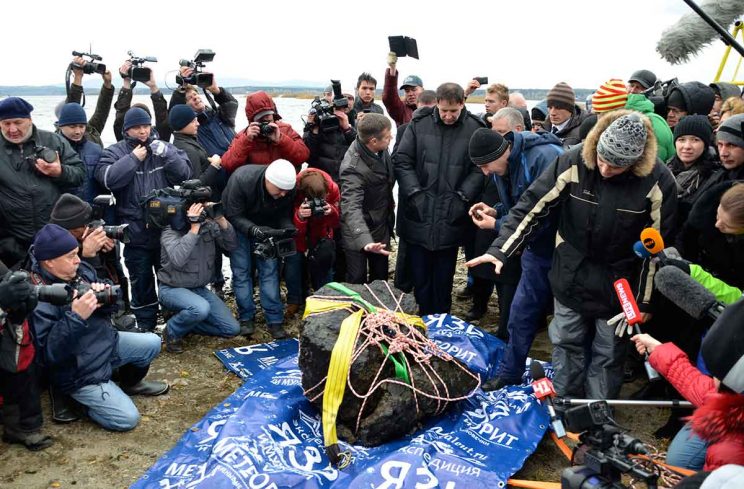 Journalists gather around a piece of a meteorite, according to local authorities and scientists, after it was pulled from the bottom of Russia’s Chebarkul Lake in 2013. (CNS photo/Anton Melnikov, Reuters)

Rocks, mineral debris and even dust from space are kept in special collections, museums and laboratories all over the world, and the Vatican Observatory took the first small step to help curators make a giant leap in coordinating their efforts globally.

Staffed by a team of Jesuit scientists, the Vatican Observatory held the first ever workshop on the curation and conservation of meteorites and extraterrestrial samples — that is, specimens gathered during missions in space, like the Apollo moon rocks or stardust captured from a comet’s tail.

The event, hosted at the observatory headquarters in the gardens of the papal summer residence, brought together 30 curators and collections’ managers representing 27 different institutions from all over the world. The gathering also had the support of the Meteoritical Society.

“For many years, each meteorite collection was curated more or less independently, with the individual curators working out their own practices for the care and preservation of the specimens, mostly under policies of their particular institutions that were very different from that of other institutions,” Jesuit Brother Robert Macke, curator of the Vatican Meteorite Collection, told Catholic News Service.

But about “a decade or so ago, curators who knew each other started talking and realised that they could accomplish so much more if they shared ideas about what they had learned,” he said in an email response to questions.

“We decided to hold a workshop,” he said, “in the hopes that we could have the time to hold deep and meaningful discussions focused on curation.”

Talks included outlining inventories, sharing the challenges of being a curator of such precious collections, best practices in conservation and for sharing samples and data. They also discussed ethical and legal issues associated with gathering, exporting and importing of meteorites from other countries.

Like the art or antiquities trades, curators also sometimes work with dealers and so-called meteorite hunters, and therefore, have to navigate tracking or authenticating the origin of specimens.

“Some dealers are very ethical, but some will disregard ethics or laws if it will get them valuable specimens. The ethical guidelines that meteorite dealers are expected to abide by are spelled out by the International Meteorite Collectors Association, and rules they must abide by in order to have their meteorites officially named and recognised are specified by the Meteoritical Society,” Brother Macke wrote.

Meteorites and extraterrestrial samples, he said, “provide a lot of useful information about the formation and history of the solar system, planets, comets and asteroids that would be unobtainable otherwise.”

As these alien specimens are exposed to earth’s “corrosive” environment, he said, “if these specimens are not properly cared for, they can quickly degrade and become less useful for study.”

“That is where the good curation becomes crucial, to preserve these specimens and make them available for study” now and in the future.

The Vatican’s collection includes a sample from Mars – from the famous Nakhla meteorite that fell in Egypt in 1911. That and the core of the observatory’s collection came from a French nobleman who had one of the largest private collections of meteorites in the world in the early 1900s.

The observatory traces its origins back to the observational tower erected at the Vatican by Pope Gregory XIII in 1578 in preparation for reforming the Western calendar. Pope Leo XIII formally established the Vatican Observatory in 1891 as a visible sign of the church’s centuries-old support for science. The papal observatory moved to the papal summer residence in Castel Gandolfo in 1935.

The observatory staff set up a second research center in Tucson, Arizona, in 1981 after Italian skies got too bright for nighttime observation. By Carol Glatz Catholic News Service

How the Church Changed After World War I