Married after 25 Years of Friendship! 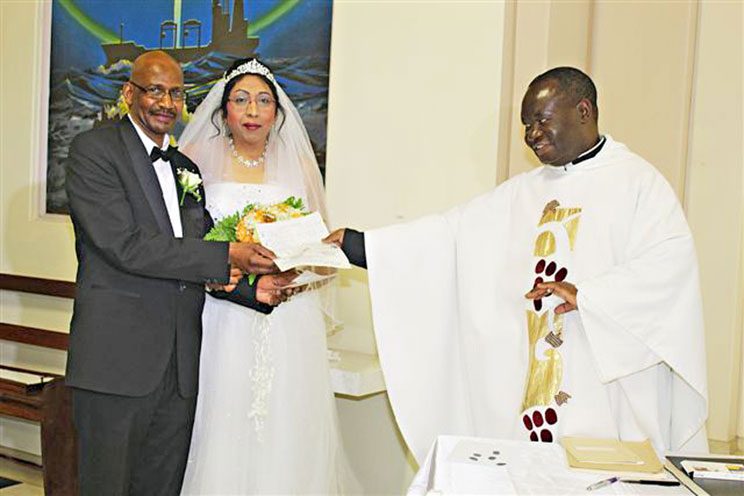 After a friendship lasting a quarter of a century, a Durban couple finally married.

Janet and Gerald Breda, both widowed, married at Our Lady Star of the Sea church in Amanzimtoti, 25 years after meeting at the Lennon Peter Agency, where he worked as a warehouse manager and she as the company’s executive secretary.

“We worked very closely together because there were a lot of union problems at the time, and so we got to know each other,” Janet recalls.

The couple, devout Catholics, were both married when they first met, and then lost their spouses.

When Janet’s husband died, Gerald, who had moved to Johannesburg, called to offer his sympathies.

They stayed in regular touch for several months, then Gerald began flying from Johannesburg to Durban on an increasingly regular basis.

“We would see each other often,” Janet said. “Finally he came down and popped the question. He said, ‘We have been best friends for years and I would like to marry you. What do you say? Would you want to marry me?’ I said yes.”

After courting for three years, they married earlier this year, with parish priest Fr Isaac Khanyile, a family friend, officiating (acting as the stand-in for Fr Massimo Biancalani, who was on holiday).

“I was so lucky Jesus was on our side. Fr Isaac gave such a beautiful service,” Janet said.

The couple will be living in Amanzimtoti, with Gerald officially moving back to Durban soon. “At the moment he is flying down every two weeks to see me,” Janet said.

Having married 25 years after their first meeting, Janet simply states: “It’s wonderful. Gerald and I are best friends, and I am so in love.”