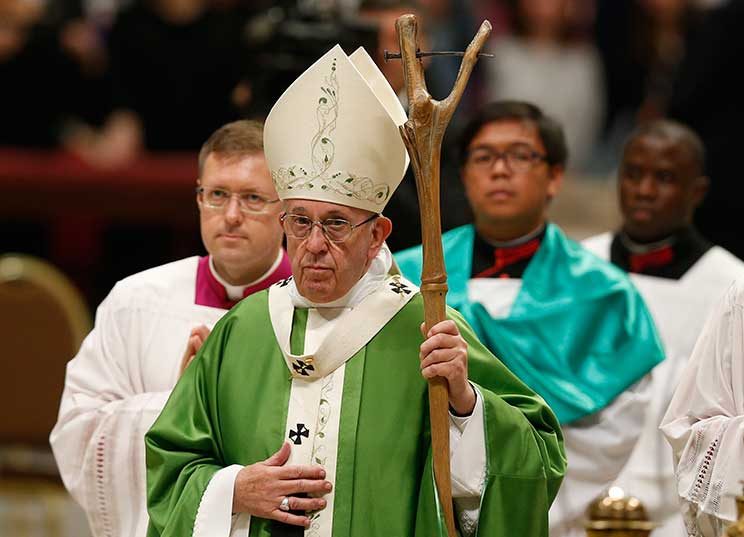 Pope Francis leave in procession after celebrating the closing Mass of the Synod of Bishops on young people, the faith and vocational discernment in St. Peter’s Basilica at the Vatican. (CNS photo/Paul Haring)

Speaking on behalf of all adult Catholics, Pope Francis formally closed the Synod of Bishops by asking young people for forgiveness.

“Forgive us if often we have not listened to you; if, instead of opening our hearts, we have filled your ears. As Christ’s church, we want to listen to you with love” because young people’s lives are precious in God’s eyes and “in our eyes, too,” the pope said in his homily Oct. 28.

The Mass, celebrated in St. Peter’s Basilica, closed a month-long synod on young people, faith and vocational discernment. The pope thanked the 300 synod members, experts, observers and ecumenical delegates for working in communion, with frankness and with the desire to serve God’s people.

May the Lord Bless Our Steps

“May the Lord bless our steps, so that we can listen to young people, be their neighbours and bear witness before them to Jesus, the joy of our lives,” he said in his homily.

Living the faith and sharing it with the world, especially with young people, entails going out to those in need, listening, being close to them and bearing witness to Jesus’ liberating message of salvation, Pope Francis said.

The pope used the day’s Gospel reading (Mk 10:46-52) and its account of Jesus helping Bartimaeus as a model of how all Christians need to live out and share the faith.

Bartimaeus was blind, homeless and fatherless, and he begged for Jesus’ mercy as soon as he heard he was near, the pope said. Many rebuked the man, “telling him to be silent.”

“For such disciples, a person in need was a nuisance along the way, unexpected and unplanned,” the pope said. Even though they followed Jesus, these disciples wanted things to go their way and preferred talking over listening to others, he said.

“This is a risk constantly to guard against. Yet, for Jesus, the cry of those pleading for help is not a nuisance but a challenge,” the pope said.

Jesus goes to Bartimaeus and lets him speak, taking the time to listen, Pope Francis said. “This is the first step in helping the journey of faith: listening. It is the apostolate of the ear: listening before speaking.”

The next step in the journey of faith, the pope said, is to be a neighbour and do what is needed, without delegating the duty to someone else.

The Lord Doesn’t Act According to My Ideas

Jesus asks Bartimaeus, “What do you want me to do for you?” showing the Lord acts “not according to my own preconceived ideas, but for you, in your particular situation. That is how God operates. He gets personally involved with preferential love for every person.”

Being present and close to people’s lives “is the secret to communicating the heart of the faith, and not a secondary aspect,” the pope said.

“When faith is concerned purely with doctrinal formulae, it risks speaking only to the head without touching the heart,” he said. “And when it is concerned with activity alone, it risks turning into mere moralising and social work.”

Being a neighbour, the pope said, means bringing the newness of God into other people’s lives, fighting the “temptation of easy answers and fast fixes” and of wanting to “wash our hands” of problems and responsibility.

“We want to imitate Jesus and, like him, to dirty our hands,” just as “the Lord has dirtied his hands for each one of us,” he said. “Let us look at the cross, start from there and remember that God became my neighbour in sin and death.”

Become Witnesses of a Love that Saves

When “we too become neighbours, we become bringers of new life. Not teachers of everyone, not specialists in the sacred, but witnesses of the love that saves,” Pope Francis said.

The third step in the journey of faith, he said, is to bear witness, particularly to those who are seeking life and salvation, but who “often find only empty promises and few people who really care.”

“It is not Christian to expect that our brothers and sisters who are seekers should have to knock on our doors; we ought to go out to them, bringing not ourselves but Jesus” and encouraging each person by proclaiming that “God is asking you to let yourself be loved by him,” he said.

“How often,” the pope lamented, “instead of this liberating message of salvation, have we brought ourselves, our own ‘recipes’ and ‘labels’ into the church!”

“How often do people feel the weight of our institutions more than the friendly presence of Jesus! In these cases, we act more like an NGO, a state-controlled agency, and not the community of the saved who dwell in the joy of the Lord.”

Just as Jesus journeyed in his ministry with others, “we too have walked alongside one another” during the synod on young people, the pope said, formally closing the synod assembly, which began Oct. 3.

Before praying the Angelus with people gathered in St. Peter’s Square, the pope said the synod did more than produce a final document, it displayed a method of listening to the voices of the people of God and discerning responses in the light of Scripture and the Holy Spirit.

While the document was important and useful, he said, the methods employed during the synod and its preparations showed “a way of being and working together, young and old, listening and discerning, so as to reach pastoral choices that respond to reality.” By Carol Glatz Catholic News Service