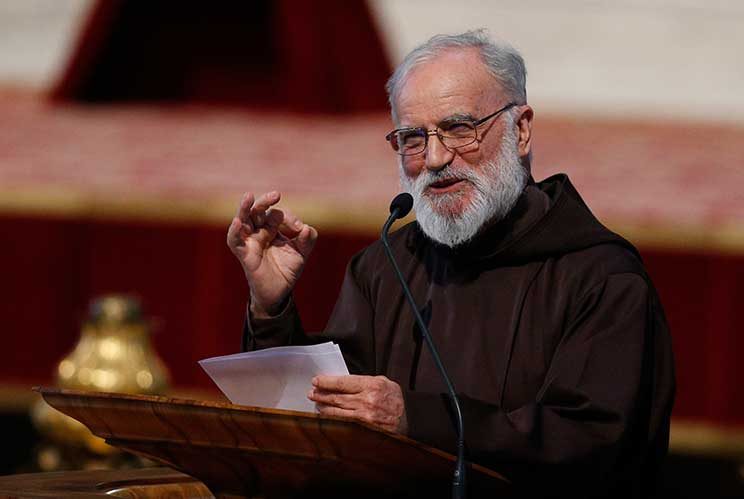 When storm clouds gather and the Catholic Church is tossed by the scandalous behaviour of some of its members, Catholics must repeat what St. Francis of Assisi repeated: “God is and that suffices,” the preacher of the papal household told Pope Francis and his aides.

“Let us also learn to repeat these simple words to ourselves when, in the church or in our lives, we find ourselves in circumstances similar to those of (St.) Francis, and many clouds will disperse,” said Capuchin Father Raniero Cantalamessa.

The preacher of the papal household leads the pope and Roman Curia officials in a spiritual reflection on most Fridays of Advent and Lent. For his 2018 Advent reflections, Father Cantalamessa said he would “set aside every other theme and any reference to current problems” and focus on each individual’s need for a personal relationship with God.

My Soul Thirsts For the Living God

“We know from experience that an authentic personal relationship with God is the first requirement in dealing with all the situations and problems that come up without us losing our peace and patience,” said the 84-year-old Father Cantalamessa.

At the suggestion of Pope Francis, Father Cantalamessa will lead a retreat for the bishops of the United States Jan. 2-8 at Mundelein Seminary near Chicago as they continue to discuss and discern ways to handle the clerical sexual abuse crisis.

For the theme of his Advent reflections at the Vatican, the Capuchin chose a verse from Psalm 42: “My soul thirsts for God, for the living God.”

“People today are passionate in searching for signs of the existence of intelligent beings on other planets,” which is “legitimate and understandable,” he told the pope and Curia officials. “Few, however, search for and study the signs of the Living Being who has created the universe, who entered into its history, and who lives in it.”

Yet while “we have the real Living One in our midst,” he said, “we overlook him to search for hypothetical beings who, in the best of cases, could do very little for us and certainly could not save us from death.”

A fundamental fact for those who believe in God is not only that he exists, Father Cantalamessa said, but that he lives and continually seeks a relationship with the human beings he created.

Many Christians see Jesus’ remark “Seek, and you will find; knock, and it will be opened to you” as a promise that Jesus will give them everything they ask for, and then are “perplexed because we see this rarely happens,” he said.

But the basic promise is “Seek me and you will find me; knock and I will open the door,” Father Cantalamessa said. “He promises to give himself, above and beyond the small things we ask of him, and this promise is always infallibly kept. Whoever seeks him finds him; he will open to whoever knocks, and once someone has found him, everything else is secondary.”

Father Cantalamessa recalled how, at the end of his life, St Francis of Assisi was troubled by the way some of his friars were behaving. In prayer, he felt the Lord rebuke him with the words, “Why are you disturbed, little man? Did I not place you over my order as its shepherd, and now you do not know that I am its chief protector?… Do not be disturbed, therefore, but work out your salvation, for though the order were reduced to the number of three, it will by my grace remain unshaken.”