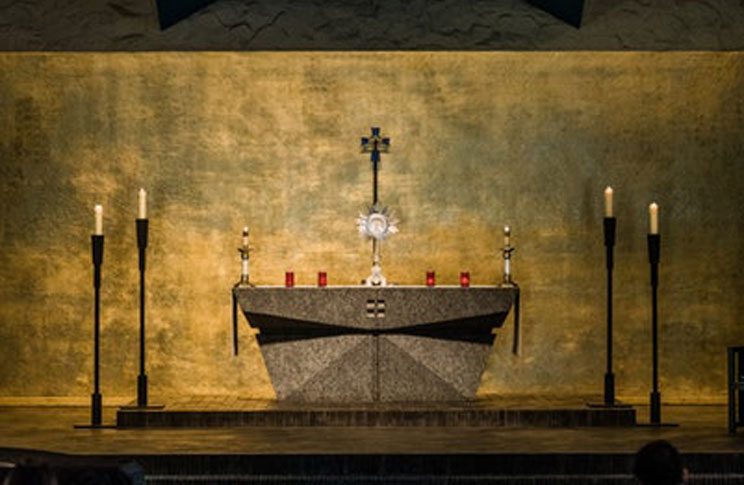 The sacraments are not for sale and priests must not demand payment for performing them if the recipient is indigent — but the faithful should pay stole fees if they can afford it, according to Bishop Victor Phalana of Klerksdorp.

He was commenting on Pope Francis’ recent criticism of priests and laity who turn their parishes into a “business” by charging for things such as baptisms, blessings and Mass intentions, calling it a scandal that’s hard to forgive.

In a homily in the chapel of the Vatican’s St Martha guesthouse, the pope said that there are two things which the people of God cannot forgive: a priest attached to money and a priest who mistreats people.

Observing that many parishes have a price list readily available for baptisms, blessings and Mass intentions, Pope Francis said that when a church or a parish start doing business, it’s like saying that salvation is no longer free.

Bishop Phalana acknowledged that some Catholic faithful have complained that some priests “sell” sacraments and funeral services.

He said that in some parishes, priests refuse anointings, burials, baptisms, and weddings if those requesting these sacraments cannot pay.

The bishop noted that in some places, non-practising Catholics can be buried with a proper Mass if their family “is able to give thousands of rands”, but  “a saintly, devoted Catholic who is poor might be refused” a Requiem Mass

“We should not give an impression that as a result of giving, you will receive church services, a special kind of blessing, divine favour, healing and a miraculous breakthrough,” Bishop Phalana said. “You cannot buy the grace of God. You cannot buy healings and miracles. They come as a free gift from God.”

Stole fees are usually offerings given by free will by the laity to clergy for different rites or ceremonies associated with the Church, Bishop Phalana explained. Offerings for a Mass, which is governed by canon law, is usually called a Mass offering or stipend.

Stole fees include offerings for baptisms, weddings, funerals, house blessings and other associated blessings, such as car blessings, he explained.

“It is an ancient tradition of the Catholic Church and a provision of Canon Law (848) that the faithful should give an offering for the administration of the sacraments as determined by the competent authority,” Bishop Phalana said.

“The stole fee should be a meaningful and significant donation given according to the means of each parishioner and the nature of the particular celebration conducted,” the bishop said.

“However, poor parishioners who genuinely cannot afford to give the stipulated amounts should be helped without insisting on the payment of stole fees,” he warned.

“However, poor parishioners who genuinely cannot afford to give the stipulated amounts should be helped without insisting on the payment of stole fees,” he warned.

He noted that priests and deacons “need sufficient income to cover their living expenses. Canon 281.1 notes that the clergy deserve appropriate remuneration since they have dedicated their lives to spiritual ministry. They need to be compensated by the faithful in exchange for their spiritual ministration”.

According to Canon 945.1, every priest is allowed to accept a stipend for the celebration of a Mass. The suitable amount must be determined by the local bishop or metropolitan province.

But, the bishop noted, Canon 848 says specifically that needy members of the faithful are not to be deprived of sacraments because of poverty.

“We must use the standard of mercy when we are faced with such situations,” Bishop Phalana said, adding that he has urged the clergy of his diocese: “Do not punish the poor for being poor.”

“There are times when our finance committees or funeral leaders will focus more on the law than on mercy. It is the role of the pastor to remind them of the requirement for mercy. If a person is genuinely poor, let them not be punished,” the bishop said.

“Where the team can prove that a particular family can afford to pay, but for some reasons do not want to pay, then you can use the law to remind them to pay the stole fee for a service,” Bishop Phalana said.

Priests can also accept stole fees or stipends below the required amount in diocesan policies, if the person cannot afford the set amount.

The question of mercy must go both ways, the bishop said.

“There are stories of people who refuse to pay a stole fee of R200 for a wedding, but will pay about R60000 for that wedding, with lots of flowers and champagne,” he noted, adding that he knows of cases of people refusing to pay a baptism stole fee of R50 but paying R1500 for a child’s blessing in an Evangelical church.

“Do these people understand that Church law expects them to remunerate the Church or the pastor for services rendered? We support the upkeep of the church: rent, electricity, repairs and maintenance.”

The laity must realise they “have a fiduciary responsibility to make a sacrifice to support the good their parish does”, Bishop Phalana said.

But where priests commit abuses by overcharging for stole fees or stipends, the laity must challenge them, he said.

“Sadly, simony [the buying and selling of sacraments] is observed by many of the Church’s ministers. I have personally seen priests refuse to ‘book’ a Mass if the full stipend is not offered,” he said.

“Simony, especially expressed in the charging for sacraments and sacramentals, is the ugly side of the Church’s administration.

“Don’t be afraid to confront the abuse,” Bishop Phalana said.