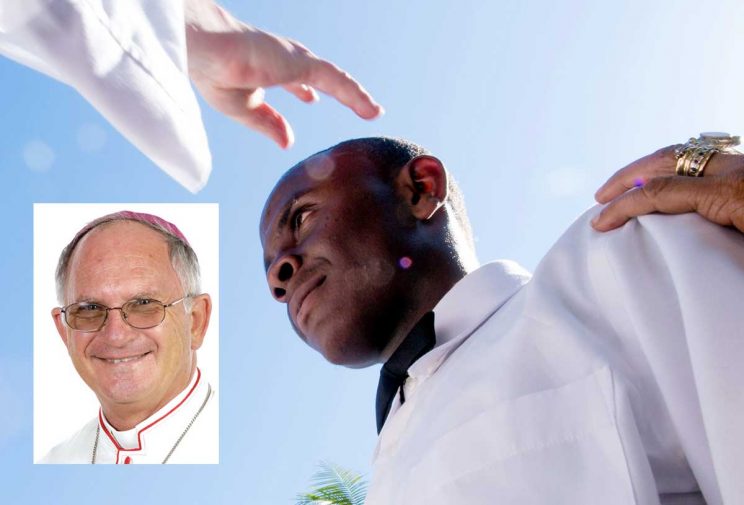 In recent weeks the question of fees charged for services by priests has been discussed around the world. CHRISTEN TORRES interviewed Bishop Edward Risi to seek explanations.

Firstly why are they called “stole fees” – a stole is the piece of cloth worn around the neck of a priest – he wears this when administering sacraments.

When Pope Francis recently criticised some priests and laity who he said turn their parishes into a “business” by charging for things such as baptisms, blessings and Mass intentions, he started a worldwide debate about questions of planned giving, Mass stipends and stole fees.

In a homily in the chapel of the Vatican’s St Martha guesthouse, the pope observed that many parishes have a price list readily available for baptisms, blessings and Mass intentions, adding that when a parish starts doing business, it’s like saying that salvation is no longer free.

Bishop Phalana said that where the poor have no means to offer stole fees and stipends, they must not be denied access to the full sacraments. But, he added, those who can afford it must make “a meaningful and significant donation given according to the means of each parishioner and the nature of the particular celebration conducted”.

We interviewed Bishop Edward Risi of Keimoes-Upington, the chair of the Department for Christian Formation, Liturgy, and Culture at the Southern African Catholic Bishops’ Conference, to explain some of the key issues in this debate.

Bishop Risi, could you explain what is meant by a “stipend” and “stole fee”? Let’s start with the Mass stipend.

“Stipend” in our Catholic usage usually refers to a Mass offering.

The monetary contribution is regulated by the bishops of the conference area.

By means of a Mass stipend, a member of the faithful or a group of people request a priest to offer Mass for their intentions, and the offering is a contribution to the support of the priest as well as the requisites for offering the Mass, such as wine, altar breads and candles.

In our conference region the Mass stipend is set at R40.

Canon Law requires the priests to keep a register of the offerings people make and include the date when the obligation on the part of the priest was discharged.

Similarly, a priest may take only one Mass stipend per day, unless he celebrates a second Mass for the faithful.

The local bishops, as well as religious congregations, usually organise a special fund for those who celebrate a third Mass in a day—the proceeds of the third stipend are usually given as a contribution for students for the priesthood or some similar purpose.

The amount stipulated as a Mass stipend is always considered the minimum amount and the faithful are always free to contribute more, if they so desire.

I remember my uncle, who was a religious priest, telling my mother that if she gave more, he would put the stipulated amount into the purse of the congregation and the rest into a good cause. And I know most priests have a similar attitude: they see these contributions as an offering participation in the saving action of Jesus and they respect them as such.

And the stole fee? Why are they called that?

“Stole fee” refers to the stole which the priest wears around his neck as a sign of his ministry. It is the symbol of priestly authority

Stole fees are also regulated by the local bishops but in this instance, it is the bishops of a metropolitan area, for example the metropolitan area of Cape Town would include Port Elizabeth, Queenstown, Oudtshoorn and so on.

The bishops stipulate what is required from the faithful towards the support of the priest through the exercise of the priestly ministry.

However, in the case of stole fees, these belong to the parish and are used to augment the support the parish gives its priest or priests.

The regulation of stole fees would include baptism, confirmation, marriages and funerals. Usually not included is the anointing of the sick.

Again, the amount stipulated is the minimum amount and the faithful are free to contribute more. However, no priest or deacon and no parish finance committee has the right to set the stole fees apart from what the local bishops have decided.

How do parishioners know how much to give?

The diocesan regulations usually require that the stole fees be posted on the parish notice board so that all may have access to that information.

In the Bloemfontein metropolitan area, under which my diocese of Keimoes-Upington falls, we stipulated as follows: baptisms R50, confirmations R50; funerals R100; marriages R100. Unveiling of tombstones R100. These contributions belong to the parish.

Traditionally there is nothing set for First Communion.

For blessing of vehicles, a donation may be offered, but this is entirely the decision of the one who asks for the vehicle to be blessed.

In the spirit of what Bishop Phalana said in The Southern Cross, a priest does not ask for a contribution for giving a blessing or for blessing water or counselling.

So to clarify: When contributing towards the celebration of the sacraments or services involving sacraments who does the money go to? The parish or the priest?

What is the purpose of having stole fees? What function do they provide to the church or priest?

Stole fees are a monetary contribution of the faithful who have requested the spiritual service of the priest or deacon. It forms part of the financial support which the parish gives him coming from collections, planned giving and other fundraising activities of the parish.

What is the difference between clergy “selling sacraments’” and parishioners paying stole fees?

Firstly, the bishops regulate the contributions from the faithful so as to prevent clergy offering their ministry to the highest bidder.

In Southern Africa, the bishops have tried to balance the requirement that the faithful support their priests adequately and that the poor and marginalised have access to the sacraments.

That is why all the amounts stipulated are minimum amounts and should in no way prevent people who can from offering more. But the decision comes from the one who is being ministered to.

There is a great challenge to giving our priests adequate financial support. Parishes need to take it more seriously upon their shoulders to organise planned giving and other fundraising opportunities.

However, this whole conversation is saying that the ministry through the sacraments and other services should never be allowed to become fund-raising opportunities.

To recap: what is subject to a stole fee, and what isn’t?

Not all the sacraments require a monetary contribution which is referred to as stole fees: traditionally confession, first Communion and anointing of the sick don’t require stole fees.

There is a stole fee for baptism, confirmation and marriage. Funerals and unveiling of tombstones have been added to this list.

It would be apt to add at this point that stole fees do not cover petrol or travel expenses. Here the Parish Finance Committees need to exercise oversight so that priests are adequately covered to answer the calls of their ministry.

Is there transparency and accountability governing a parish’s income?

Canon law requires priests to keep a record of contributions made to them by the faithful.

Contributions such as stipends or stole fees are also regulated by local bishops. Diocesan regulations requires bishops to post on their parish board the prices of stole fees as well as Mass stipend, for sacraments so that all parishioners are able to access to the information.

As mentioned, bishops have regulated the contributions of the faithful so as to prevent clergy from “selling sacraments” to parishioners, by setting certain prices for services. This is done so as to protect the poor and marginalised while continuing the required financial support for the faithful.

In the spirit of what Bishop Phalana said in The Southern Cross article, a priest does not ask for a contribution for giving a blessing or for blessing water or counselling.

Priest Finds Out His Baptism and, therefore, Ordination are Invalid
Share