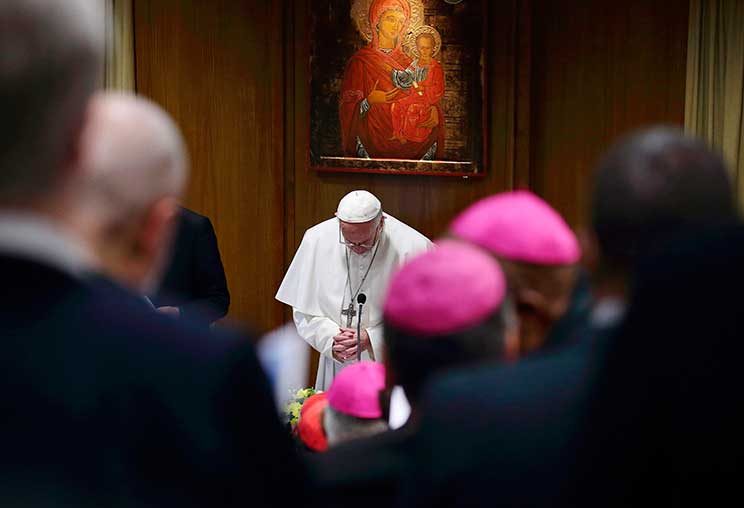 Pope Francis attends the opening session of the meeting on the protection of minors in the church at the Vatican Feb. 21, 2019. (CNS photo/Evandro Inetti, pool)

“Every time I refused to have sex with him, he would beat me,” an abuse survivor from Africa told Pope Francis and bishops attending the Vatican summit on child protection and the abuse crisis.

The meeting began Feb. 21 with the harrowing stories of survivors of sexual abuse, cover-up and rejection by church officials.

The pre-recorded testimonies of five survivors were broadcast in the synod hall; the Vatican did not disclose their names, but only whether they were male or female and their country of origin.

In the first testimony, a man from Chile expressed the pain he felt when, after reporting his abuse to the church, he was treated “as a liar” and told that “I and others were enemies of the church.”

Comparing the abuse crisis to a cancer in the church, the survivor said that “it is not enough to remove the tumour and that’s it,” but there must be measures to “treat the whole cancer.”

He said he prayed that those who “want to continue to cover up” would leave the church, giving greater space “to those who want to a create a new church, a renewed church and a church absolutely free from sexual abuse.”

A woman from Africa recalled the humiliation and suffering she endured when she was sexually and physically abused by a priest beginning when she was 15; he made her pregnant three times and each time forced her to have an abortion.

“At first, I trusted him so much that I did not know he could abuse me. I was afraid of him and every time I refused to have sex with him, he would beat me,” she said. “And since I was completely dependent on him economically, I suffered all the humiliations he inflicted on me.”

“It must be said that priests and religious have a way of helping and at the same time also destroying,” she said. “They have to behave like leaders, wise people.”

Another testimony was offered by a 53-year-old priest from Eastern Europe who, although grateful to God for his vocation, continues to bear not only the wounds of the abuse he suffered as teenager but also the wounds of the rejection he experienced after reporting it to his bishop.

Initially, the bishop did not respond at all, so, the priest said, he reported the abuse to the nuncio.

When he finally did meet the bishop, he recalled, “he attacked me without trying to understand me, and this hurt me.”

“What would I like to say to the bishops?” the priest asked. “That they listen to these people, that they learn to listen to the people who speak. I wanted someone to listen to me, to know who that man is, that priest, and what he does.”

A U.S. survivor told the bishops that what wounded him the most “was the total loss of the innocence of my youth and how that has affected me today.”

The church, he added, needs leadership, vision and courage from bishops to fight the scourge of abuse and “to work for resolution, and work for healing and work for a better church.”

The final testimony was delivered by man from Asia who said he was “abused over 100 times” and continues to endure “traumas and flashbacks” that have caused him difficulty in living his life and connecting with other people.

Bishops and heads of religious orders, he said, must take concrete action to ensure that clergy members who abused are punished.

“I ask the bishops that they be clear on this matter because this is one of the time bombs occurring in the church in Asia. If they want to save the church, we have to work together and make the perpetrators give themselves up,” he said.

“As Jesus always said, we need to ‘be like children,’ not sexual abusers of children.”

At a briefing with journalists Feb. 21, Australian Archbishop Mark Coleridge of Brisbane said that although he had listened to many survivors and their stories of abuse, he was nevertheless “surprised at the way tears, as it were, welled up.”

“I had never heard them in the extraordinary context of this gathering and, frankly, in the presence of the pope,” Archbishop Coleridge said. “So, the setting itself added a whole new power and, in a sense, another dimension to hearing these voices that spoke very briefly, but very powerfully and very deeply and struck just the right note on the first morning of — not just a meeting — this journey of exploration.”

Archbishop Charles Scicluna of Malta, who handles abuse cases as adjunct secretary of the Congregation for the Doctrine of the Faith, said he and the other bishops at the summit “were all quite taken by the testimony of the different victims.”

“We could hear voices that were emotional, powerful and, I think, we needed to hear victims. I have always said that in order to understand the gravity of the situation, you need to listen to victims, we need them, because that is sacred ground,” Archbishop Scicluna told journalists.

Gathering the voices and experiences of survivors was no easy task, but it was necessary for bishops to grasp the magnitude of the crisis as well as the damage survivors have and continue to endure, said Jesuit Father Hans Zollner, a professor of psychology and president of the Center for Child Protection at the Pontifical Gregorian University in Rome.

Bishops, he said, needed to listen “to survivors and victims from all continents, in different languages so it becomes clear that this is not a North American or Central European problem. They were searing, brutal, honest testimonies and nothing was spared.” – By Junno Arocho Esteves Catholic News Service