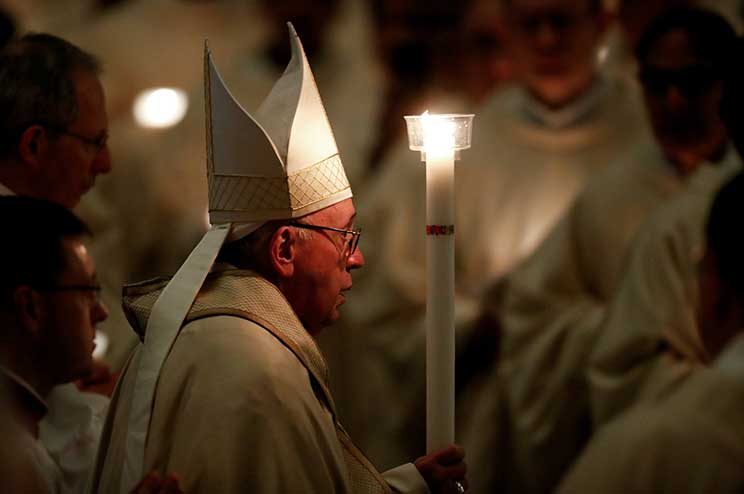 Pope Francis holds a candle as he arrives to lead a Mass during the World Day for Consecrated Life in St. Peter’s Basilica at the Vatican. (CNS photo/Remo Casilli, Reuters)

The choice to follow God in life is not just a once-in-a-lifetime opportunity but a decision that is made every day, Pope Francis said.

Christians truly encounter Jesus through concrete events in life that occur “every day; not every now and then,” the pope said in his homily for the feast of the Presentation of the Lord and the World Day for Consecrated Life.

The feast commemorates the 40th day after the birth of Jesus, when Mary and Joseph presented him to the Lord in the temple.

Thousands of consecrated men and women belonging to religious orders attended the Mass, which began with the traditional blessing of candles.

Beginning the celebration in the vestibule of St. Peter’s Basilica, Pope Francis blessed the candles and prayed that the Lord may guide all men and women “on the path of good” toward his son, “the light that has no end.”

After the blessing, dozens of consecrated men and women processed down the main aisle, where thousands more were gathered, holding lighted candles that illuminated the darkened basilica.

In his homily, the pope reflected on the Gospel reading from St. Luke, in which the young Mary and Joseph, along with baby Jesus, meet the elderly Simeon and Anna, an encounter between young and old that is not dissimilar to the experience of religious men and women.

“If we remember our fundamental encounter with the Lord, we realise that it did not arise as a private matter between us and God,” the pope explained. “No, it blossomed in the believing people, alongside so many brothers and sisters, in precise times and places.”

The vocation to consecrated life “blossoms and blooms in the church” when young people find their roots and give fruit when encouraged by the elders. However, when a person is isolated, he warned, that calling “withers.”

God, he continued, also calls religious men and women to him through “concrete things,” especially through the sacraments, daily prayer and closeness, “especially to those spiritually or physically most in need.”

Pope Francis said consecrated life is a prophetic vision in the church that is needed in today’s world that is “a call for everyone against mediocrity.”

Consecrated life, he added, is not a path of survival in the face declining vocations but rather a new life. “It is a vision of what is important to embrace in order to have joy: Jesus.” – By Junno Arocho Esteves Catholic News Service

Jesus Carries the Burdens of Those Who Suffer

Pope: Idolatry of Wealth and Beauty Demands a Costly Sacrifice