Don’t Dread Lent, but Make the Best of its 40 days 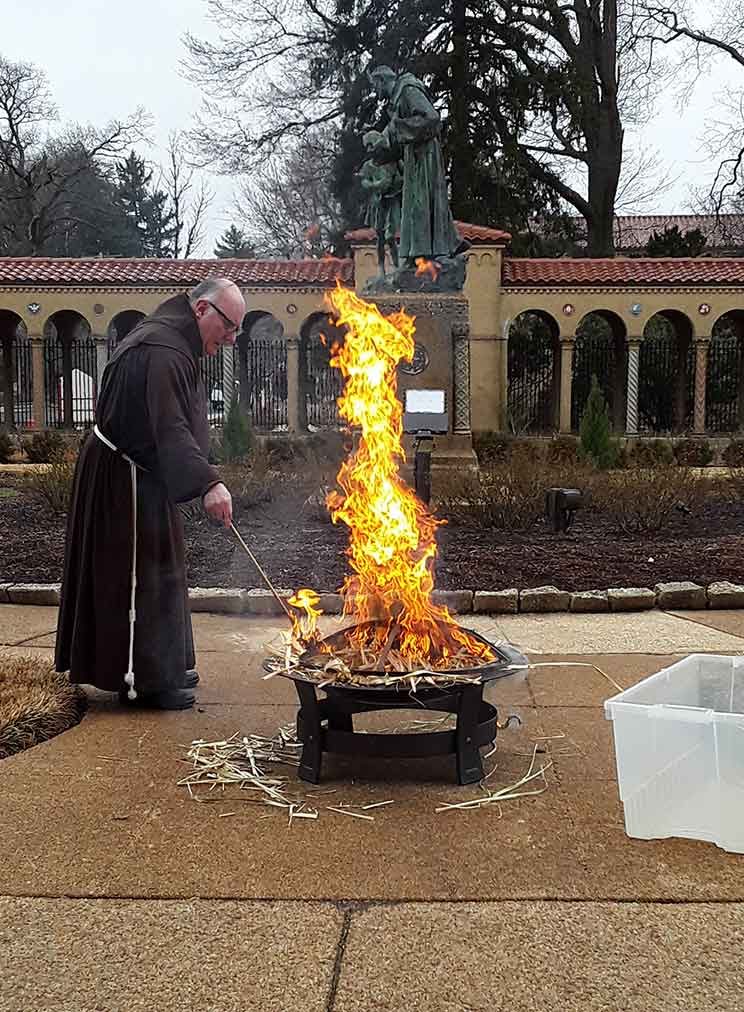 Long, orange flames consumed the palms Massgoers had brought in to Washington’s Franciscan Monastery of the Holy Land to burn ceremonially before the noontime crowd that gathered for their last Sunday Mass before Lent.

“This is kind of a graphic reminder of how Lent starts: We make the ashes, we realise those ashes are a symbol of what happens to us – not the fire, by the way!” joked Father James Gardiner, a Franciscan Friar of the Atonement, to laughter from the crowd.

Early childhood memories may conjure up glum images of Lent, a time to give up things we loved for 40 days, but as adults, it’s time to put aside childish things, as Corinthians tells us, Father Gardiner said, and enter into Lent, not “dragging” but welcoming it as a spiritually rich period.

During his Sunday homily, Father Gardiner offered three tips to “make the best” of the Lent’s 40 days.

“Welcome Lent. Give it a chance, so to speak, to do what it’s intended to do: foster our ongoing conversion to the Lord as a result of our baptism into his life, death and glorious resurrection,” he said.

Conversion is not a once-in-a-lifetime event, he said, but a lifelong process that continues “until one’s last breath is drawn.” Lent, however, is “a stark warning not to delay further conversion to the Lord, especially when the ashes are imposed, accompanied by those ominous and unsettling words: ‘Remember that you are dust and to dust you shall return,'” he said.

“Second, remember prayer, fasting, almsgiving, and don’t make other people pay for what you’re giving up,” he said.

Instead of giving up material things, consider giving up certain practices that distract from hearing God’s voice, he said.

“I suspect God would be pleased with a break from our jabbering and we might be able to hear the voice of God who speaks most often in silence,” he said. “What if our fasting were to extend from food and drink to refraining from gossip, or from negative judgements about other individuals or groups, or from holding a grudge?”

Our almsgiving could include giving time and attention to others, even if we find them disagreeable, he said.

Become a Parable of Jesus

And finally, become a living parable of Jesus, he said.

“You and I would do incredibly well to think of ourselves, individually and institutionally, as living parables, charged with credibly and compellingly connecting the Gospel of Jesus Christ with life as we know it,” he said.

And this is where the urgency and the words from the Book of Sirach come into play, he said: “Delay not your conversion to the Lord, put it not off from day to day.” – By Rhina Guidos Catholic News Service