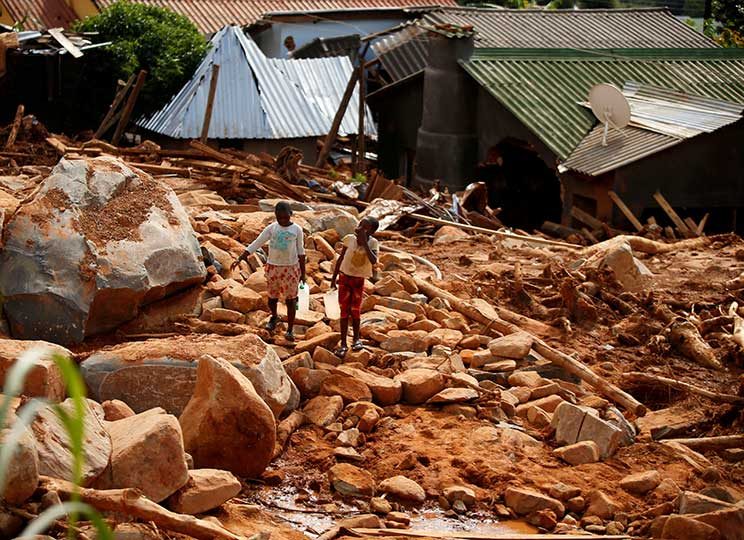 Children carry drinking water over debris in the aftermath of Cyclone Idai in Chimanimani, Zimbabwe. More than 2 million people in Mozambique, Zimbabwe and Malawi have been affected by a cyclone that has killed more than 700 people, with hundreds still missing in Mozambique and Zimbabwe. (CNS photo/Philimon Bulawayo, Reuters)

After the devastating impact of Cyclone Idai in Mozambique, Zimbabwe and Malawi, the Jesuits in South Africa are collecting donations in cash or kind (clothes, blankets, non-perishable food) for those affected, to be distributed by the Jesuit provinces of Zimbabwe and Mozambique.

Johannesburg donations can be dropped off at Holy Trinity church in Braamfontein, St Martin de Porres in Orlando West, and the Jesuit Refugee Service at 484 Marshall Street, Belgravia.

More than two million people have been affected by Cyclone Idai across the three countries.

The Southern African Bishops’ Conference (SACBC) has already provided financial aid, and is calling on people of goodwill to be more generous in their Lenten contributions, so that the Church can continue to help. The SACBC has also set up a Cyclone Idai emergency relief account people can donate to.

The bishops applauded rescue agencies and the international community for their efforts to rescue survivors and bring relief to all the afflicted.

The SACBC also encouraged bishops in Mozambique, Zimbabwe and Malawi to continue to work with their governments to ease the situation.

Fr Agbonkhianmeghe Orobator SJ, president of the Jesuit Conference of Africa and Madagascar, said the scale of devastation is enormous.

“Floods have wiped out entire villages, and key infrastructure, such as roads, hospitals, schools, has been destroyed.”

“Let us especially use this time of Lent to help those in need in Mozambique, Zimbabwe and Malawi,” Fr Orobator said. “Even the smallest of gestures can bring hope,” he said.