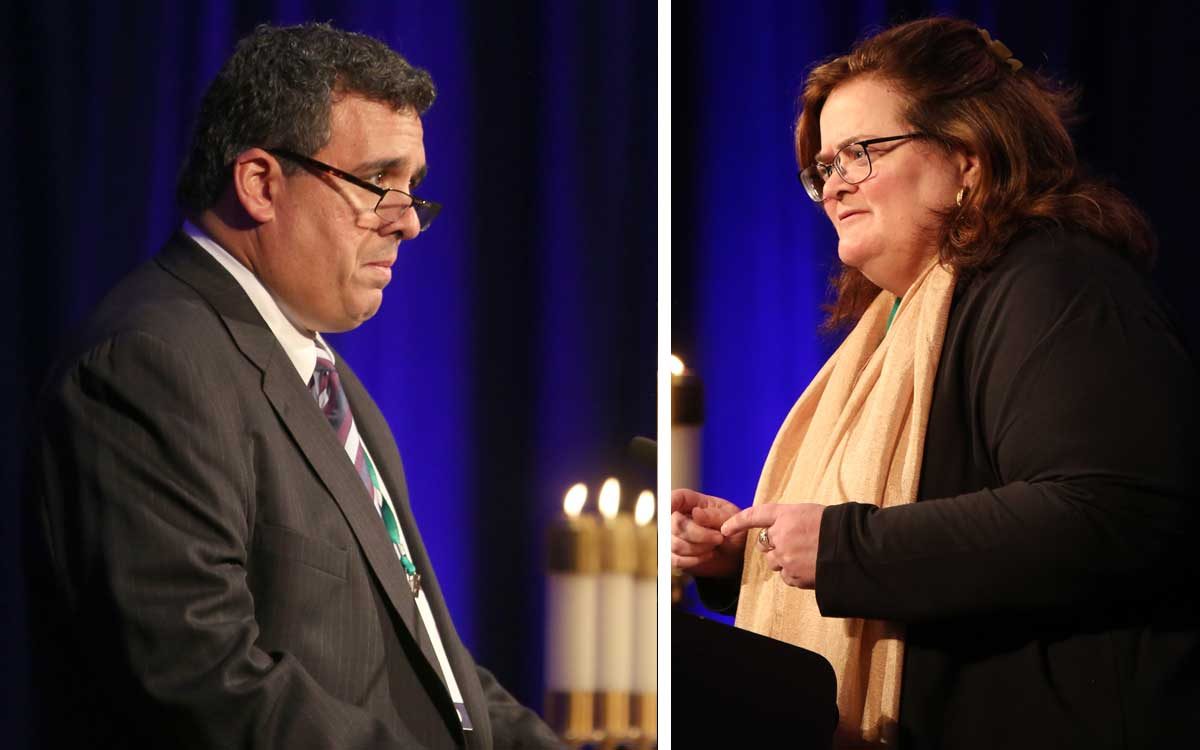 By Dennis Sadowski  – Teresa Pitt Green and Luis Torres Jr. aren’t afraid to say they were sexually abused by priests. They want the church to know it especially, and wider society as well.

They also are working to ensure that the church and its clergy are responding to the needs of abuse survivors with a keen ear, pastoral sensibility, compassion and understanding.

A good way to do that, Pitt Green and Torres have determined, is by focusing on healing through prayer, reconciliation through encounter and “Christ-centered restorative justice” for people wounded by the abuse scourge, including survivors, their families, clergy and faith communities.

Their vehicle is Spirit Fire, which Pitt Green, 59, and Torres, 54, founded. They have been working together for three years.

Spirit Fire is rooted in the principle of restorative justice, which recognizes that an act of abuse is more than a crime because it harms people, personal relationships and the wider community. Restorative justice pursues a just response by addressing such harms as well as the wrongdoing.

“We are focused on encountering the person and encountering God in each one of us,” said Torres, a longtime attorney and an 18-year member of the review board of the Diocese of Brooklyn, New York.

It’s through that encounter that healing can occur, the Spirit Fire founders said.

Pitt Green and Torres took their message to last fall’s general assembly of the U.S. Conference of Catholic Bishops in Baltimore. During a day set aside for prayer and reflection, both candidly discussed their experiences, their struggles, the renewal of their Catholic faith and their desire for honest and fruitful reconciliation that the church must seek with clergy abuse survivors.

Both have rooted their own healing from abuse in their Catholic faith. While they admitted there are times when they struggle in confronting what happened years ago, in the end they have come to realize it is their faith and the Catholic Church itself that can promote healing and recovery better than anything else.

Torres said he could never turn his back on the church even during a dark period in years past in which he withdrew from all that gave him comfort and meaning in life as the memory of his abuse raised its ugly head anew.

Pitt Green, who has been leading workshops, retreats, webinars and spiritually based programs for abuse survivors, families, parishes, priests and bishops for 15 years, has entrenched her efforts in Spirit Fire.

For healing, distinct components are needed, Pitt Green said: spiritual healing, therapeutic, physical or psychological healing, and practical considerations, which include justice and economics. It is the church, she said, that can assist in all of these areas.

Years ago, she told CNS, she realized that it was only through faith that she could heal and move forward. For others, though, she recognizes that approaches may differ.

“Some are called by God to bring this involuntary lesson to God. That’s the way God is. I believe some of us are being called by God to do this because we are restless,” said Pitt Green, who is leader of the Northern Virginia Human Trafficking Task Force.

“I will say for me to survive, what I did, a piece of me internally, had to become completely focused on the Lord. It’s a practical reality. It is why I’m still alive. It’s not holy holy stuff. It’s survival stuff. That means I’m comfortable talking to anybody now,” she said.

And talk to people she has. Her workshops have included priests and bishops. In sessions, she helps them understand that they must see abuse survivors as people with a traumatic past and that their role as clergy requires a distinct pastoral approach to eventually achieve healing.

Pitt Green said that in her years of outreach efforts, she has worked with about 40 bishops. She credited several for their work with survivors, saying “they’re really trying” to understand what those who have been abused are confronting. “They really want to respond as priests to us and as pastors to survivors and families.”

In the sessions she guides for clergy, Pitt Green discusses ideas on how they can respond to survivors in a pastoral way. She said she has seen “priests get emotionally moved by the workshop because they realize, ‘I have a critical role here.'”

Spirit Fire’s offerings are many. Its website lists several resources, including an online magazine, “The Healing Voices,” and materials for diocesan victim assistance coordinators. The organization also provides services to parishes and faith communities that encompass mediation, pastoral care training, peer counseling for survivors and family, workshops and retreats.

The founders credit Jasmine Salazar, victim assistance coordinator in the Brooklyn Diocese, for connecting them.

Salazar told CNS she realised that Torres and Pitt Green shared similar beliefs – especially the need for restorative justice – about how the church could help abuse survivors heal. “It seemed to me that they would complement each other,” she said.

“Connecting with others and developing relationships with survivors, that’s where healing happens,” explained Salazar, who has worked with Torres since 2013 in his diocesan review board role.

“Going through a traumatic experience like this is very isolating. So what a victim usually does is isolate themselves even more and go further and deeper into their darkness. It is only connecting with others that they can break away from that isolation,” she said.

Pitt Green and Torres admitted they have received “blowback” from some abuse survivors for being so involved with the institutional church. But they said they have welcomed different perspectives in their work.

Torres expressed gratitude for all of the organizations and voices speaking up for abuse survivors, whether more vocal and advocacy oriented or more rooted in the spiritual dimension of life.

“I don’t know if we would be having this discussion now if they hadn’t kept pushing that (advocacy). At the same time, each of us have to respect our own truth and what we’re comfortable with,” he said.

“We’re more collaborative,” Pitt Green added. “I think their hearts are in the right place, but ultimately at the end of the day when you finish the lawsuit or whatever you’re doing, you still need a relationship with God. And for those people who are missing that other piece, we’re going to be here.”

More information on Spirit Fire is online at https://spiritfirelive.wordpress.com/.