Pope Critical of ‘Meanness’ Toward Migrants and Refugees 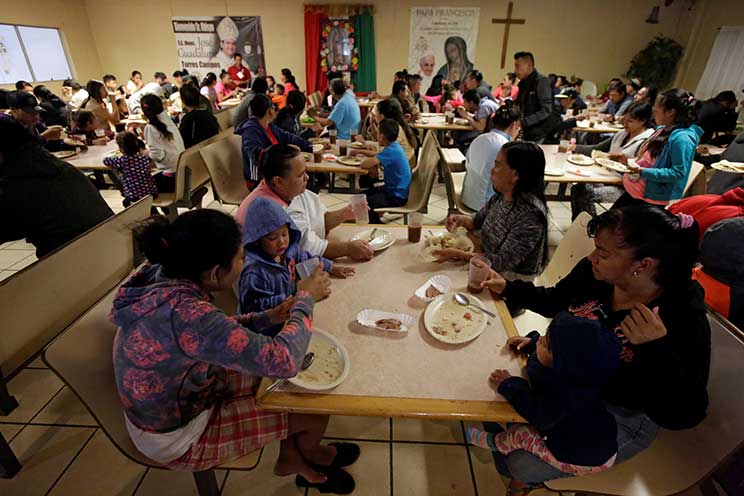 Migrants eat at a Catholic-run shelter in Ciudad Juarez, Mexico. Being indifferent to or excluding migrants is a sign of a deteriorating morality that will soon spread and risk marginalising everyone who fails to fit in, Pope Francis said. (CNS photo/Jose Luis Gonzalez, Reuters)

“The signs of meanness we see around us heighten our fear of ‘the other,’ the unknown, the marginalised, the foreigner,” and thus many migrants seeking a better life end up as recipients of this meanness, said Pope Francis in his recently released 2019 World Day of Migrants and Refugees message.

The Holy Father warned that when we allow fears and doubts to “condition our way of thinking and acting to the point of making us intolerant, closed and perhaps even – racist” – there is a serious problem. For “in this way, fear deprives us of the desire and the ability to encounter the other, the person different from myself; it deprives me of an opportunity to encounter the Lord.”

This wonderful idea of actually encountering the Lord, and all others, is one of Pope Francis’ major themes. He is trying to inspire us to build not personal walls, nor national walls, but instead a “culture of encounter.”

There are many lies that have been spread about migrants and refugees; lies that they are murderers, rapists and criminals of all sorts. But numerous studies point to the contrary.

The vast majority are good decent human beings who pay taxes while enjoying virtually no benefits. And they are working at jobs most citizens will not do – like the back-breaking work of picking our vegetables and fruits, washing dishes and landscaping. Furthermore, they add fresh vitality to our towns, cities and parishes. They need us and we need them! This is what Pope Francis’ “culture of encounter” is all about.

“The progress of our peoples” said the pope “depends above all on our openness to being touched and moved by those who knock at our door. Their faces shatter and debunk all those false idols that can take over and enslave our lives; idols that promise an illusory and momentary happiness blind to the lives and sufferings of others.”

Instead of building Pope Francis’ welcoming “culture of encounter,” several European countries including Bulgaria, Hungry, Slovenia, Macedonia, Austria and France (funded by the U.K.) have built barriers to keep out people who are fleeing armed conflicts and terrible poverty.

And in the U.S., the Trump administration’s determination to lengthen the wall at the Mexican border and his policy of “zero-tolerance” – stepped-up apprehension and detention of migrants/refugees often fleeing armed conflict and drug gang violence, mass assembly-line criminal court trials, jail sentences  and deportation back to the violence refugees were fleeing – is causing untold suffering.

I have been to the U.S.-Mexico border in southern Arizona, and have touched “The Wall” – the approximately 25 foot high steel barrier blocking Mexicans from entering the U.S. It looks and feels unholy. Thousands of refugees and migrants have died trying to walk far around the wall and through the unforgiving Arizona Sonoran desert.

Joanna Williams, director of education and advocacy for the Catholic-run Kino Border Initiative, located near the border in Nogales, Mexico (see: www.kinoborderinitiative.org), told me asylum seekers are turned back when they seek to turn themselves into Customs and Border Protection at U.S. ports of entry, and have to wait for many weeks or months before they have the opportunity to even ask for asylum.

Please prayerfully read the Holy Father’s World Day of Migrants and Refugees message. It will very likely inspire you to stand against the meanness – and stand with our desperate brothers and sisters who are knocking at our nations’ doors begging for Christian kindness.