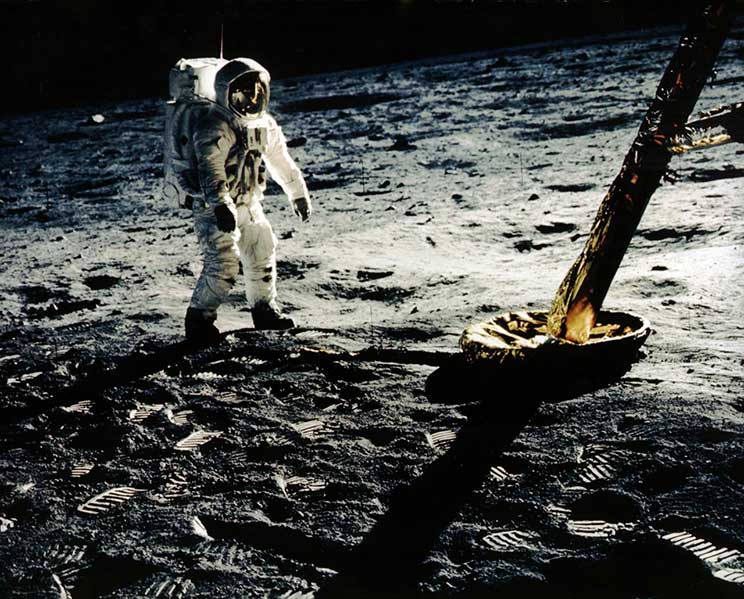 I didn’t realise there was a moon-landing Bible verse until my priest mentioned it a few weeks ago.

It seems that while returning from the historic first landing on the moon 50 years ago, astronaut Buzz Aldrin took part in a TV broadcast the night before splashing down. During the broadcast, the second man to set foot on the moon’s surface read Psalms 8:3-4: “When I consider thy heavens, the work of thy fingers, the moon and the stars, which thou has ordained; What is man that thou art mindful of him? And the Son of Man, that thou visitest him?”

It turns out Aldrin’s religious faith is not an anomaly. In fact, the 29 astronauts who visited the moon during the Apollo program were a generally religious cohort. According to NASA, 23 were Protestant and six Catholic, with a high proportion of them serving as church leaders in their congregations.

The astronauts didn’t talk publicly about their faith very much, but that’s largely because NASA started clamping down on public expressions of faith after the famous Christmas Eve Bible reading of Apollo 8, the first manned mission to the moon.

As astronauts Frank Borman, Jim Lovell and William Anders entered into lunar orbit on Dec. 24, 1968, they did a live TV broadcast, showing pictures of the Earth and the moon as seen from their spacecraft.

They ended the broadcast with Anders saying, “For all the people on Earth, the crew of Apollo 8 has a message we would like to send you.”

They then took turns reading from the Book of Genesis, beginning with “In the beginning God created the heavens and the earth” and concluding with “and God saw that it was good.”

Borman then closed: “Good night, good luck, a Merry Christmas, and God bless all of you – all of you on the good Earth.”

That reading from space prompted a lawsuit against NASA by militant atheist Madalyn Murray O’Hair. The case was rejected by the courts, but it had its impact. NASA told the astronauts to tone it down when it came to wearing their faith on their spacesuit and they discouraged Aldrin from reading from Scripture while he was on the moon’s surface.

Undaunted, Aldrin took advantage of a few moments before he and Neil Armstrong left the lunar module to step onto the moon. He radioed to Mission Control: “Houston. This is Eagle, the LM Pilot speaking. I would like to request a few moments of silence. I would like to invite each person listening in, wherever and whomever he may be, to contemplate for a moment the events of the past few hours and to give thanks in his own individual way.”

For Aldrin, that meant observing the Lord’s Supper. Aldrin was an elder in his Presbyterian Church and had received permission from his pastor to take bread and wine with him to space and give himself Communion.

During a radio blackout, Aldrin writes, “Just before I partook of the (Communion) elements, I read the words which I had chosen to indicate our trust that as man probes into space we are in fact acting in Christ. I sensed especially strongly my unity with our church back home, and with the church everywhere. I read: ‘I am the vine, you are the branches. Whoever remains in me, and I in him, will bear much fruit; for you can do nothing without me.'” (Jn 15:5)

The tradition of religious observances in space has continued. During the Apollo 15 mission two years later, astronaut James B. Irwin was exploring the rough terrain of the lunar surface when he radioed Earth that he was reminded of one of his favourite Scripture passages: “I’ll look unto the hills from whence cometh my help.” (Ps 121)

As for whether Jesus in the Eucharist has ever made it into space, he has, many times. According to Catholic News Service, astronauts Sid Gutierrez, Thomas Jones and Kevin Chilton, an extraordinary minister of holy Communion, celebrated a Communion service on the space shuttle in 1994, 125 miles above the Pacific Ocean.

In 2013, International Space Station astronaut Mike Hopkins, a Catholic, arranged with his pastor and diocese to carry a pyx with six consecrated hosts broken into four pieces, enough for him to receive weekly Communion for the 24 weeks he was in space.

Is there something about space travel that lends itself to spiritual transcendence? Probably. As Aldrin pointed out, God reveals himself in space as man reaches out to the universe. “There are many of us in the NASA program who do trust that what we are doing is part of God’s eternal plan for man.”

There also are practical implications, as astronaut Mike Good, another Catholic shuttle veteran, observed. “Heading out to the launchpad is like being in a foxhole,” Good said. “There’s not a lot of atheists in a foxhole. I don’t think there’s many atheists sitting atop the launchpad.”

“Astronauts found God in space” posted  on the website of The B.C. Catholic, newspaper of the Archdiocese of Vancouver, British Columbia. It was written by the editor, Paul Schratz.