By Junno Arocho Esteves – The objective of the upcoming Synod of Bishops for the Amazon is to highlight the need for religious, political and social leaders to come together and defend the dignity of indigenous men, women and children and an ecosystem that is crucial to the environment, said Peruvian Cardinal Pedro Barreto Jimeno of Huancayo.

In an essay published July 18 by La Civilta Cattolica, the Jesuit journal, Cardinal Barreto said the synod as well as the church’s mission in the Amazon are “expressions of a significant accompaniment to the daily life of the peoples and communities who live there.”

“According to the social doctrine of the church, the mission of every Christian includes a prophetic commitment to justice, peace, the dignity of every human being without distinction, and to the integrity of creation in response to a predominant model of society that leads to exclusion and inequality and causes what Pope Francis has called a real ‘culture of waste’ and a ‘globalisation of indifference,'” the cardinal said.

The synod gathering in October will reflect on the theme “Amazonia: New paths for the church and for an integral ecology.” The Vatican released the preparatory document for the synod June 8.

The Peruvian cardinal, who also serves as vice president of the Pan-Amazonian Church Network, known by its Spanish acronym as REPAM, did not directly address recent criticisms or concerns about doctrinal matters and theological questions regarding the synod’s working document, but instead focused on the dangerous impact climate change will have on the region and its inhabitants. 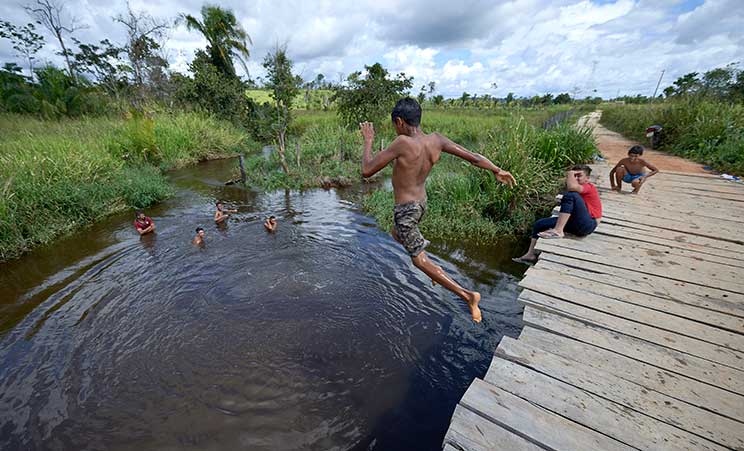 Children jump from a rickety bridge into a river near Anapu, in Brazil’s northern Para state. This area was forest land until recent decades, when the expansion of the agrarian frontier led to the steady destruction of this part of the Amazon’s rain forest. (CNS Photo/Paul Jeffrey)

The Amazon, he said, is a living system that “reflects great social diversity, since it is inhabited by about 2.8 million indigenous people who belong to 390 peoples, 137 of which are isolated or without external contacts; 240 languages are spoken there, belonging to 49 different linguistic families. Its inhabitants number around 33 million.”

Cardinal Barreto said the synod for the Amazon is a continuation of the church’s mission of “following the Gospel command” to go out to the world and accompany the poor, especially in “an increasingly devastated and threatened territory.”

“In this sense, as an ecclesial event, the synod can be an important sign of the effective response, promoting justice and the defence of the dignity of the people most affected,” he said. “In general, we believe that everyone – society, governments and the church – must pay attention to these voices in order to assume more consistently our respective differentiated and potentially complementary responsibilities.”