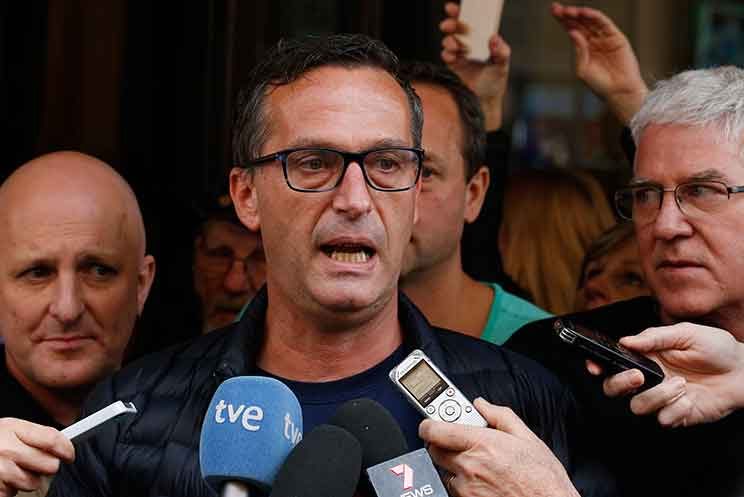 David Ridsdale, who was sexually abused by his uncle, Gerald Ridsdale, then a priest, stands next to fellow sexual abuse survivors in Rome March 3, 2016. Lawyers say the Australian Catholic Church has opened the floodgates for tens of millions dollars in compensation claims after the Diocese of Ballarat admitted, for the first time, it knew of the behavior of the pedophile priest, yet continued to move him around from parish to parish. (CNS photo/Paul Haring

By Michael Sainsbury – The Australian Catholic Church could face tens of millions dollars in compensation claims after the Diocese of Ballarat in Victoria state admitted, for the first time, it knew of the behavior of a pedophile priest yet continued to move him around from parish to parish.

Former priest Gerald Ridsdale, 85, is one of Australia’s most notorious pedophiles and is serving an 11-year prison sentence due to finish in 2028, the latest in a series of convictions for the abuse of 85 children. Ridsdale held 16 different appointments during 29 years as a priest, an average of 1.8 years per appointment.

The church’s admission was made in the case of JCB v. Bishop Paul Bird for the Diocese of Ballarat, in which a defendant with a pseudonym is suing the diocese for his rape, at age 9, by Ridsdale at the tiny country town of Mortlake in 1982. A mediation hearing will be held on Oct. 15 and, if this is unsuccessful, a 10-day civil trial will begin Jan. 29 to determine the amount of damages the church will pay the victim.

At the time of JCB’s rape, Bishop Ronald Mulkearns headed the Diocese of Ballarat. Ridsdale abused dozens of children during his time in Mortlake.

“We believe it is the first time in Victoria that the Catholic Church has admitted it failed to protect a victim of child sex abuse and is therefore legally liable,” the victim’s lawyer, Judy Courtin, said in a statement.

It appears to be first time that the church in Australia has admitted — in a court — that it had prior knowledge of an offending priest, ahead of him committing further offenses. But evidence given by the diocese into Australia’s landmark Royal Commission into Institutional Responses to Child Sexual Abuse, which ran from 2013 to 2017, showed that the bishops of Ballarat had known about Ridsdale for decades.

A spokesman for the Australian Catholic Bishops’ Conference said it would not be making any comment on the Ridsdale admission. The Diocese of Ballarat did not respond to requests for comment on the matter.

In its final report, the royal commission found that the Diocese of Ballarat had known of Ridsdale’s proclivities since the early 1960s. Bishop Mulkearns’ predecessor, Bishop James O’Collins, warned Ridsdale that he would be “off the mission” if such a thing happened again. Yet it did.

The commission found by the time of the rape of JCB, Bishop Mulkearns certainly knew; both former bishops are deceased.

“It is clear that Bishop Mulkearns should not have appointed Ridsdale (as) parish priest of Mortlake, given his knowledge of the priest’s history,” the commission found.

“We are satisfied that his (Mulkearns) priority was to protect the reputation of the church and to avoid scandal, rather than responding to the pastoral needs of the children Ridsdale had sexually abused in the wider community,” the commissioners found.

Yet prior to the Sept. 6 admission, lawyers representing the Ballarat Diocese tried to argue that Bishop Mulkearns had not known.

“This has been a long time coming,” lawyer Vivian Waller, a specialist in institutional abuse cases, told Catholic News Service.

“The admission (about Ridsdale) now means that legally, in civil cases against the church regarding Ridsdale, that complainants would not have to prove a breached duty of care, although they would still have to prove they were injured,” Waller said.

The case also is the first time since Australian courts removed the so-called Ellis Defense, upon recommendation of the Royal Commission. The defense was named after a 2007 High Court ruling that prevented victims from directly suing the church as it had no legal status as an entity.

Waller said the case also lays the foundation for the suing of other senior living clerics who were consultors to Bishop Mulkearns beginning in 1982. A number of consultors were named by the royal commission as having known about Ridsdale.

“We do not accept that Bishop Mulkearns lied to his consultors,” the commissioners wrote in their final report. “It is inconceivable … that the bishop deceived his consultors by not telling them the true reason” that Ridsdale was being moved around.

Cardinal George Pell, whose appeal of his conviction on five counts of sexually assaulting two choirboys more than two decades ago was rejected by the Victorian Supreme Court Aug. 21, was a consultor to Bishop Mulkearns.

Cardinal Pell told the royal commission, via a video link from Rome, that he had no knowledge of Ridsdale’s criminal activities. However, because of his then-pending criminal trial, a large section of the case study on Ballarat — about who knew what and when — was redacted when the royal commission released its report in 2017. The redactions are expected to be lifted once Cardinal Pell has exhausted his last avenue of appeal.

The cardinal has until Sept. 18 to lodge an appeal to the Australian High Court, the country’s top judiciary, similar to the U.S. Supreme Court and the United Kingdom’s Privy Council.

Irish Abuse Survivor:  Clericalism at Heart of Crisis, but its ‘Day Coming to End’
Share