Vatican to German Church: Stay in Harmony with the Universal Church 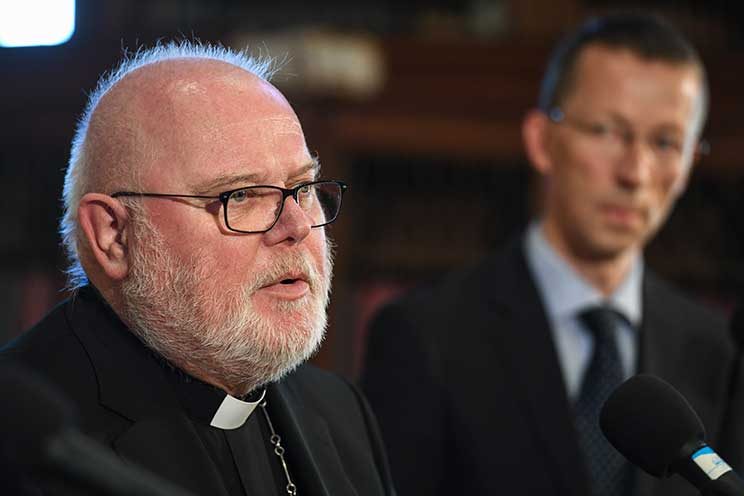 By Cindy Wooden – The German bishops’ plans for a two-year process of consultation and deliberation on key issues facing the Catholic Church must conform to universal church law and must be approved by the pope, said the prefect of the Congregation for Bishops.

Cardinal Marc Ouellet, prefect, sent a letter  to Cardinal Reinhard Marx of Munich and Freising and attached an analysis by the Pontifical Council for Legislative Texts of proposed statutes for the German “synodal way.”

The pontifical council said that, in proposing a process that would include “binding deliberations” on new rules for the church in Germany, the bishops were, in effect, planning a “plenary council,” which would require prior approval by Pope Francis.

Matthias Kopp, spokesman for the German bishops’ conference, said, “The assessment of the pontifical council deals with the draft version of the statutes as of June 2019 and does not yet take into account the version updated in July and after the meeting of the permanent council (of the bishops’ conference) in August.”

The most recent draft, he said, “no longer contains some passages to which the assessment refers.” Kopp added that Cardinal Marx has been in touch with Cardinal Ouellet and would meet with him “in Rome next week to clear up any misunderstandings.”

In his letter, which the German bishops posted on their website, Cardinal Ouellet referred to the letter Pope Francis wrote to German Catholics in June “to repeat some basic principles for an effective ‘synodal journey’ lived in harmony with the universal church.”

Cardinal Ouellet said he hoped the pontifical council’s assessment of the earlier statutes – an assessment the German bishops also posted – “could contribute to the regulation of the work of the ‘synodal journey’ so that such an important event for the people of God in Germany, celebrated in communion with the entire church, would reinforce the ecclesial roots and relaunch the evangelising mission of the church in that country.”

The German bishops began discussing plans for the gathering in September 2018 after they published a study that revealed an estimated 3,700 cases of sexual abuse had been reported in the German church from 1946 to 2014.

In response to the study and to a widespread sense that something needed to change, the bishops and Catholic lay leaders began discussing holding a national gathering of Catholics in a “synodal” style where the experience and voice of everyone would be welcome and where bishops wouldn’t be the only ones making decisions.

The preparations focused on four key areas: the exercise of power and authority in the church; sexual morality; the priesthood, including the issue of mandatory celibacy; and the role of women in the church, including the possibility of opening more areas of ministry to them.

Vatican Reigns in the German Church

In response, the pontifical council asked, “How can a particular church deliberate in a binding way if the themes dealt with touch the entire church?”

The pontifical council also objected that the initial draft of the statutes seemed to imply that the bishops’ conference and the lay Central Committee of German Catholics “are equal” and would send an equal number of participants, would share the duties of presiding over the assemblies and would have an equal vote.

“This equality between bishops and laypeople cannot exist ecclesiologically,” the pontifical council said. While all Catholics are called to active participation in the church, “that does not mean that the church is structured democratically and that decisions are made by a majority of the faithful.”

In a diocesan synod, a plenary council or the German “synodal way,” the council said, study, consultation and decision-making are separate tasks belonging to different members of the church based on their role.

And, while the bishops are the only ones who can make binding decisions on most matters, if the question impacts the wider church, only the pope can decide, the pontifical council explained.

In his letter to German Catholics in June, Pope Francis insisted the process the German church is embarking upon must focus on strengthening people’s faith and the church’s witness.

In trying to resolve problems and shortcomings, the pope warned, there is the temptation to think that “the best response would be to reorganize things, to make changes and ‘fixes’ that would allow the life of the church to be put in order and in tune.”

Instead, he said, the church must adopt an attitude that “seeks to live and make the Gospel transparent and breaks with the gray pragmatism of the daily life of the church in which everything proceeds normally but, in reality, faith wears out and degenerates into pettiness.”

In early September, meeting with the bishops of the Ukrainian Catholic Church, Pope Francis said consultation with laypeople is an essential part of the deliberation of bishops, not so they can change church teaching, but so they can preach the Gospel more effectively.

“There is a danger,” the pope said, which is “thinking today that making a synodal journey or having an attitude of ‘synodality’ means investigating opinions — what does this one and that one think — and then having a meeting to make an agreement. No! The synod is not a parliament!”