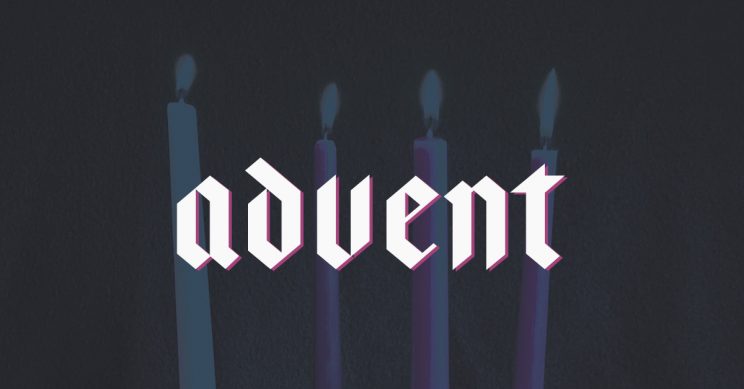 By Deacon Greg Kandra – Christmas is still weeks away, and already we’re exhausted.

We’ve heard too much Mariah, endured too much tinsel, watched too many Hallmark specials, been bombarded with too many ads for champagne and candy and cars. The calendar is out of whack. Black Friday actually began on a Monday, and Christmas music began on Halloween and for weeks now the mail has been delivering fat catalogues from long-forgotten pen pals like Harry & David and L.L. Bean.

Is it January yet?

In the middle of all this, we can easily forget a vital part of the Christian calendar: Advent.

I once preached a homily in which I bemoaned the tendency to merge Advent and Christmas into one vaguely wintery holiday blur we might as well call “Chradvent.” It’s all the same, isn’t it? Might as well start early, right?

These weeks before Christmas are intended to make that singular holiday – and singular holy day – matter. Advent sets the stage, calling us to “prepare the way,” building in our hearts a sense of yearning, anticipation and joyful hope. Dorothy Day once compared Advent to a woman expecting a child. “She lives in such a garment of silence,” Day wrote, “as though she were listening to hear the stir of life within her.”

Silence? It’s hard to appreciate that when every day is full of “Fa-la-la.”

We’re left to wonder: How can we recapture the mystery and quiet of this beautiful season? How can we transform the incessant bell-ringing hucksterism into something more like a prayer?

How can we make Advent matter?

I’d suggest three ideas, three approaches to these days that can help us experience Advent the way it was meant to be.

First, look. I live in New York City, and every corner during December gives you an eyeful. The lights, the decorations, the ads, the throngs – it’s thrilling. And exhausting. But we can appreciate it more, I think, if we strive to see beyond the early Christmas onslaught, to what lies beneath. Just like 2,000 years ago, we are still a world in waiting. Waiting for salvation. Waiting for sustenance. Waiting for hope. And significantly, we are a world desperately waiting for light.

So much of what crowds these pre-Christmas days fulfills our ancient need to give this dark time of year light. We untangle chords and replace burned out bulbs and then we string wires around the house and over shrubbery for one explicit purpose: to beat back darkness and defy the night. God’s first words in all of Scripture become our anthem in December: Let there be light! During these weeks, when we see these extravagant displays – tasteful or not – we are seeing something that affirms creation and says, no matter what, there we will be light.

We see in all this signs of hope.

Advent is about that hope, that expectation of the Sun of Justice. All of what we see around us, in ways large and small, reflects that. It is a prayer of anxious yearning.

Second, listen. Do you hear what I hear? The soundtrack of Christmas makes itself heard, and heard, and heard, during Advent — and sometimes, even earlier. On top of that, there is the noise from, well, life. Cable TV, the internet, modern media of all kinds cry out for attention. The news will not be ignored. Impeachment! Invasion! Floods! Snow! Sales! It all runs together after a while.

Where is that sacred silence that Day wrote about?

We need to seek it, wherever and however we can. It takes effort, but the effort is worth it. Turn down the volume. Click off the computer. Turn off the TV. Lower the lights and dim the glare. Work to make this season a time of gentleness, a time of quiet and thoughtfulness and peace. Remember the carol: “The world in silent stillness waits to hear the angels sing.” How can we hear the angels if the TV is screaming about how Wayfair has just what we need?

Carve out moments in your day to have some of that “silent stillness,” and prayerfully reflect on something besides what you need to order on Amazon for delivery by Christmas.

The world during the time of Christ had its own noise, its own distractions, its own conflicts and troubles. But into that came the Prince of Peace. How can we prepare ourselves to welcome him today in our own time?

Finally, just let it go. That anthem from “Frozen” can offer helpful advice during this stressful time of year. Too busy? Too distracted? Some things can wait. Let it go.

When I was growing up, every year we got a live Christmas tree, complete with roots, to plant when the holiday was done. That meant we often didn’t get a tree or bring it inside until a day or two before Christmas. It made the last hours before the holiday more wondrous. And it taught me the invaluable lesson of patience — something at the heart, I think, of Advent. The decorating can wait. The wrapping can wait. This is a season about waiting, after all.

And the season that follows, and starts Dec. 25, has more to it than the secular world may realize.

A couple of years ago, New York Cardinal Timothy M. Dolan wondered on his radio show, “You know, how come nobody writes devotions or prayers for the Christmas season? It’s a real season, you know! It doesn’t end for weeks.” He had a point. It always saddens me to see Christmas trees tossed to the curb before New Year’s. The Christmas season actually extends until the feast of the Baptism of the Lord, in mid-January. (I know of at least one parish that leaves its Nativity scene up in the church until the feast of the Presentation, in February.)

Developing a better sense of the separate seasons of Advent and Christmas – breaking up “Chradvent” – can help us have a better sense, as well, of why these times of year matter.

So save the Christmas greetings and wishes for later. Look to this time with gratitude and awe – the anticipation of what is coming and the joy of what will be.

Enjoy it this season’s special character. Savour it. Embrace its quiet wonder.

Or, as a song might put it: Have yourself a merry little Advent.

Deacon Kandra serves in the Diocese of Brooklyn, New York. He is the author of “The Busy Person’s Guide to Prayer” (Word Among Us Press).