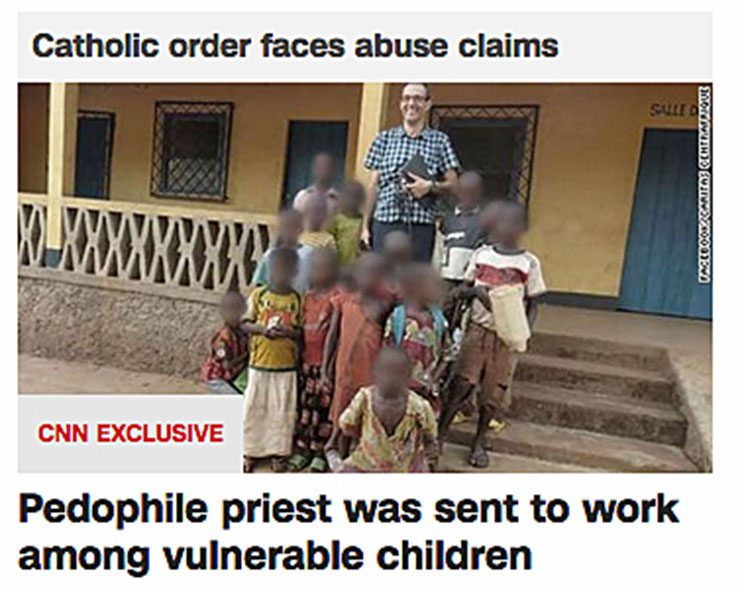 Salesian Father Luk Delft is seen in a screen shot from CNN.com. Caritas Internationalis, the Vatican-based confederation of 165 national Catholic charities, has expressed sadness and outrage over incidents of child abuse by the Belgian priest, who had been the national director of Caritas in the Central African Republic. (CNS screen shot/CNN.com)

By Jonathan Luxmoore  – Belgium’s Salesian order defended its decision to send a priest convicted of child abuse to work with Caritas in Central African Republic, where he has been accused of abusing children again.

Father Carlo Loots, Belgian provincial vicar and spokesman for the Salesians of Don Bosco, also said the order had learned from the incident and changed some procedures.

“We’ve learned that all communications involving such cases must be written and documented, rather than exchanged verbally at the risk of being passed over and forgotten,” Father Loots told Catholic News Service Nov. 26.

“We’ve also improved our safeguarding policy and learned to be much more prudent in dealing with an abuser. We thought at the time we’d taken the right decisions, but we must recognize doing our best at that moment wasn’t enough.”

Investigations continued into activities by Salesian Father Luk Delft, who was accused in a CNN report of abusing children while working in Central African Republic.

In 2012, after being convicted of child abuse and possession of child pornography while working as a Salesian school teacher and aid agency director, Father Delft was given an 18 months’ suspended jail sentence and 10-year ban from contact with children by Ghent’s correctional court.

However, in 2013 he was hired by Bishop Albert Vanbuel, a Belgian and fellow Salesian, to work with Caritas at a church camp for internally displaced people in Central African Republic’s Kaga-Bandoro Diocese. After Bishop Vanbuel retired in October 2015, Father Delft was appointed national director of Caritas in Bangui.

However, CNN said Father Delft continued to have access to poor and vulnerable children; it said there were allegations of abuse in Kaga-Bandoro.

Father Loots told CNS sending Father Delft to Central African Republic had seemed a “reasonable solution” in 2013 when Bishop Vanbuel requested help with “food deliveries and distribution” at his diocese’s refugee compound. He added that the Belgian court’s probation commission had had “no idea about the situation in the CAR” when it approved the priest’s assignment.

Although Bishop Vanbuel had been informed of Father Delft’s background and agreed to supervise him, Father Loots said, he also had “clearly no idea how a pedophile really functions.”

“Bishops and religious orders always face a big problem knowing what to do with abusers of young people – there’s no death penalty for this, so we can’t kill them, but nor can we send them to a desert island,” he told CNS. “Instead, we have to look for a solution, and the philosophy is that such people deserve a new chance – but not in the same context or situation as previously.”

“You can say the Salesians shouldn’t have let him go to Africa, but we trusted the advice given by the probation commission, which should also have seen it was too risky. This case is very complex, and I don’t think it helps much to start blaming people,” Father Loots said.

He said the priest was now in Belgium, being supervised and receiving therapy at the Salesians’ Boortmeerbeek community, where there were “no activities involving young people.”

The Vatican-based Caritas Internationalis, which coordinates 165 Caritas charities in 200 countries, said in a statement it was “saddened and outraged” by the accusations against Father Delft and expressed “compassion and solidarity” with children and families identified in the CNN report. It added that it was assisting Caritas in Central African Republic “as it investigates the allegations, strengthens its safeguarding mechanisms and offers care and support to any possible victims.” It also asked Caritas organizations worldwide to “vet their governance, staff, volunteers and international staff.”

Michel Roy, former secretary-general of Caritas Internationalis, said in a Nov. 23 statement he had been unaware of Father Delft’s conviction until 2019. However, he added that he had been warned by a therapist in 2017 that Father Delft “should not be in contact with children,” and had alerted Caritas in Central African Republic and Cardinal Dieudonne Nzapalainga of Bangui, who had in turn relayed concerns to the Salesians.

Catholics make up a third of the 4.66 million inhabitants of Central African Republic, one of the world’s poorest countries, which has been wracked by militia violence since 2013.

The Salesian centers at Damala and Galabadja took in around 70,000 youngsters during the height of violence in 2014 and continue to offer shelter, education, vocational training and psychological and medical care for “youth of all ages, cultures and religions,” according to a Salesian website.

However, he added that national Caritas staffers were not “Vatican employees” or subject to Vatican laws. He said responsibility for implementing Caritas Internationalis’ safeguarding policies, adopted in 2018, rested with autonomous member-organizations, governed by national bishops’ conferences.

Jesuit Father Tommy Scholtes, spokesman for the Belgian bishops’ conference, said the conference had “immediately alerted” the public prosecutor’s office in Brussels when informed of claims against Father Delft in June, adding that the priest’s “future functions” would be determined by the Vatican’s Congregation for Doctrine of the Faith.

He said an ecclesiastical investigation would follow the Belgian judicial process.

“Things are complicated since Luk Delft is here, and his possible victims are there. But we trust the competence of the judicial authorities in Belgium and the CAR. Although I think everyone did their best, we must conclude this wasn’t enough.”

Time to Say: I Am sorry!